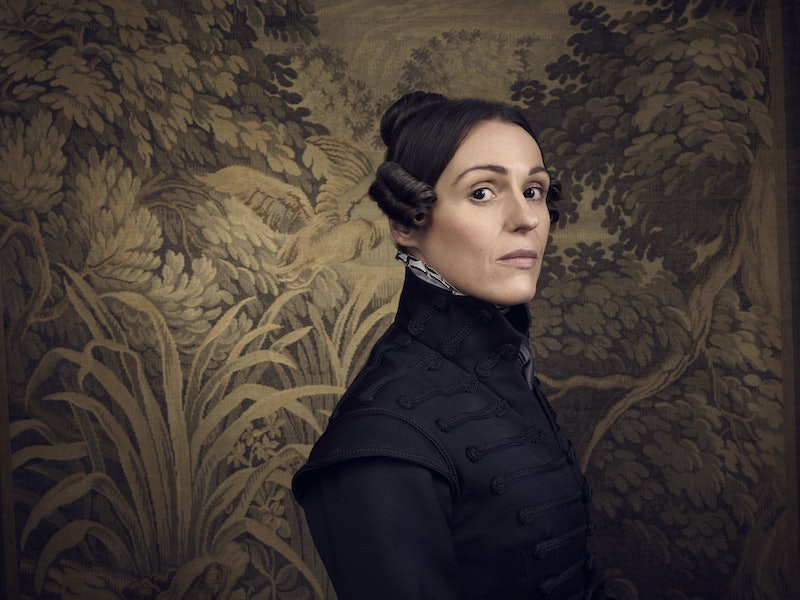 HBO's new period drama, Gentleman Jack, reimagines the real-life tale of Anne Lister, a queer scholar and businesswoman with androgynous style navigating her identity in 1832 England. Not only is it captivating to watch her confront the rigid gender norms and anti-gay sentiments of the time, but the details of Anne Lister's diaries add another intriguing layer to the story. These aren't just any old scribbles in a journal — many entries are carefully coded, meant to guard Lister's personal relationships and secrets against prying and judgmental eyes.

According to The Hollywood Reporter, Lister's diaries are made up of around 5.5 million words filling 7,500 pages. Approximately one-sixth of that content is written in code, the outlet continues, and rather complex code at that: Lister used a combination of algebra, Ancient Greek letters and words, zodiac symbols, punctuation, and mathematical symbols. Per the Smithsonian, Lister used this method primarily to conceal her sexuality, as at the time, lesbian relationships were so unheard of that they weren't even mentioned in laws banning relationships between men.

Sally Wainwright, who wrote Gentleman Jack, used the money from a screenwriting fellowship to help fund the diaries' translations. The UK's Calderdale Museums now have digitized versions of the texts and continue to work on transcribing and translating them. Wainwright, too, has sifted through Lister's words at great length in order to better understand the woman whose life she's bringing to screen. "It's not typed script, it's handwriting," Wainwright told the New York Times. "So few eyes may have actually been across any particular piece of writing. To know that you might be the first person who's read [a section] — it's very intimate."

Wainwright has her own ideas about why exactly Lister kept such extensive diaries — part of it was for practicality, but as she told the Times, she also thinks it was quite personal. "She didn't want to forget things, particularly in business. If she'd done a deal with someone, she would make a record of everything down to the last halfpenny,” Wainwright continued. "But I also think she was a compulsive writer. She took great pleasure in actually putting it down in black and white and in recording her relationships with other women, because then she could relive them."

The fact that Lister's diaries are still being decoded to this day made filming the show a thrilling experience for actor Suranne Jones, who plays Lister. "I was able to visit Halifax library and actually take out one of Anne Lister's original diaries and read that for myself, which was a real emotional experience, because I'm touching the paper which she had her hands all over," Jones said in an interview with NPR. "Sally was able to read the code to me, over my shoulder, which was again extraordinary ... the code itself, parts of the diary still hadn't been decoded, so it was being decoded especially for us as we filmed, which was really exciting."

According to THR, the first season of Gentleman Jack covers an 18-month timespan, and there's "plenty more [diary content] for further seasons." It's unclear exactly how the story will continue, but given that Gentleman Jack's team is continuously uncovering new details about Lister's life, the possibilities are wide open.

More like this
Miriam Haart & Girlfriend Nathalie May Have Broken Up After 'My Unorthodox Life'
By Brad Witter
Are Kayla and Seb From 'Too Hot To Handle' Still Together?
By Karen Fratti
'The Traitors' Tom Just Set The Record Straight About His Relationship With Alex
By Sophie McEvoy
These 'Law & Order: SVU' Throwback Pics Show 23 Years Of Shipping History
By Grace Wehniainen
Get Even More From Bustle — Sign Up For The Newsletter