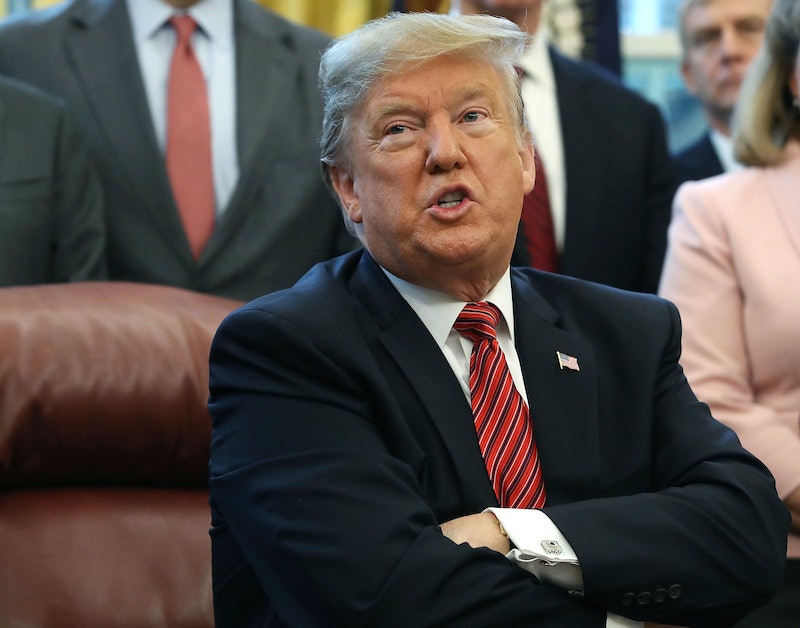 On Wednesday, a second federal workers union sued the Trump administration over the government shutdown. According to the Washington Post, the National Treasury Employees Union (NTEU) has filed a class-action lawsuit against the administration on behalf of thousands of other federal workers who, despite coming in to work, haven't been been sent paychecks since the shutdown went into effect on Dec. 22.

Bustle has reached out to the White House for comment. “It is unconscionable that many employees are having to work — and in some cases overtime — with no pay whatsoever,” NTEU National President Tony Reardon said in a statement. “These civil servants took an oath to the Constitution and they do not deserve to be treated this way."

The plaintiff in the suit is Customs and Border Protection agent Albert Vieira. Vieira says he still hasn't been paid overtime wages for a 12-hour shift that he worked on Dec. 22, the day the shutdown went into effect, even though that paycheck was due on Jan. 3. In addition, Vieira anticipates, due to comments from acting White House Chief of Staff Mick Mulvaney, that he won't be paid on time for the work he did between Dec. 23 to Jan. 5., either.

Mulvaney said Sunday that the next round of paychecks for federal employees "[would] not go out as originally planned on Friday night" if the shutdown impasse wasn't resolved by Tuesday evening at midnight, which it wasn't.

In the lawsuit, the NTEU argues that the Trump administration, by withholding paychecks from federal employees past their due dates, is a violation of the Fair Labor Standards Act (FLSA). The union is suing on behalf of Vieira and all other federal workers who a) haven't been paid for overtime shifts they worked on Dec. 22, and/or b) expect not to be paid for regular shifts they worked from Dec. 23 to Jan. 5.

According to CNBC, around 400,000 federal employees are expected to show up to work but not get paid during the shutdown, which President Trump instigated in December when he announced that he wouldn't sign any spending bill that doesn't include billions of dollars for a U.S.-Mexico border wall. Congressional Democrats have staunchly refused to fund a border wall, and the government shut down on Dec. 22 at midnight as a result.

Congressional Democrats have held talks with the White House in an attempt to resolve the impasse, but neither side has budged from their respective positions. More recently, Trump threatened to declare a "national emergency," which could theoretically allow him to circumvent Congress and authorize construction of a wall on his own. This would almost certainly result in legal action against the administration, however.

Despite its name, the NTEU represents workers at dozens of different federal agencies, not only the Treasury. Its lawsuit comes after another union representing federal employees, the American Federation of Government Employees (AFGE), announced on Dec. 31 that it will be suing the administration after its members didn't receive paychecks for their work.