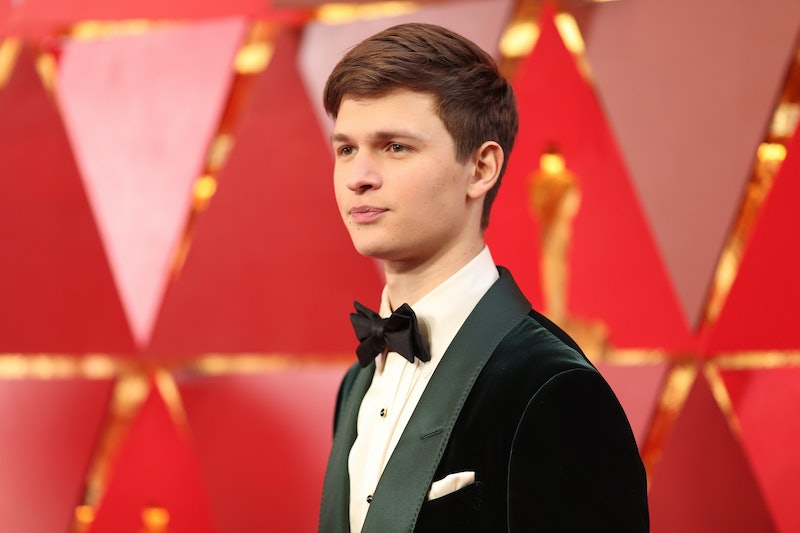 Ansel Elgort may be most recognized for his starring roles in Baby Driver and The Fault in Our Stars. But his upcoming movie will feature the actor in a role unlike anything he's done before — and the story is almost too outrageous to believe. Ansel Elgort will play a Ukrainian teen scammer, Artur Samarin, and the real-life story behind Samarin's time in the United States will have viewers on the edge of their seats.

As Deadline reported, the movie is based on a GQ article, "The Great High School Impostor," written by Daniel Riley and published this past May. Riley's article details how Samarin came to the United States as a teen and posed as someone five years younger in order to attend a Pennsylvania high school. In the intro to the story, Riley called Samarin's actions "one of the boldest hoaxes of our time."

The GQ article explains that while Samarin was a dedicated student, earning straight-A's and joining the Navy JROTC, things weren't as easy for him in his personal life. The then 19-year-old was adopted by a Harrisburg couple, Stephayne McClure-Potts and Michael Potts, even though he was originally only in the United States on a work visa to spend the summer in Pennsylvania. According to what Samarin told GQ, it was reportedly the Potts' idea for him to change his age from 19 to 14.

By the account Samarin gave GQ, he claims it was also his adoptive parents' idea for him to enroll in the local high school. If their adopted son, who started going by Asher Potts, was a school-age dependent, they'd get "a small payout from the Social Security Administration and attendant tax benefits," Riley reported. The Potts were later charged with welfare fraud, Fox 43 reported in August 2016. Aside from the fraud charges, Samarin also told GQ that his adoptive parents threatened to call immigration services if he didn't cook and clean for them, though the Potts denied Samarin's account to GQ.

As Riley reported, Samarin was arrested in February 2016, the same year he would have graduated from Harrisburg High School. By that point, he'd run away from the Potts that school year and had been living with a friend's family. According to Riley, Samarin's adoptive parents suggested that he was a "foreign terrorist" who was violent and had threatened to stage a shooting at his high school.

But Samarin ended up being prosecuted for more than passport fraud or identity theft. As Riley reported, Samarin had a relationship with a 15-year-old student. His peers thought he was 17, but he was actually 22 at the time. He was charged with involuntary deviate sexual intercourse, GQ reported; the charges were later changed to statutory sexual assault after his trial. Samarin was sentenced to 11.5 to 23 months in prison. After 14 months of imprisonment, he was deported.

So far, there's not much news about the movie, and Elgort's co-stars haven't been announced. But it does go to show that the public's fascination with scammers isn't going away anytime soon. Shonda Rhimes is developing a Netflix series about Anna Delvey, who was indicted for larceny and grand larceny and is now serving time at Rikers Island.

Sometimes, real-life events are even more outrageous than fictional stories, as Elgort's new movie roles proves. Now fans of the actor will just have to wait and see how he brings such an unusual true story to life on the big screen.