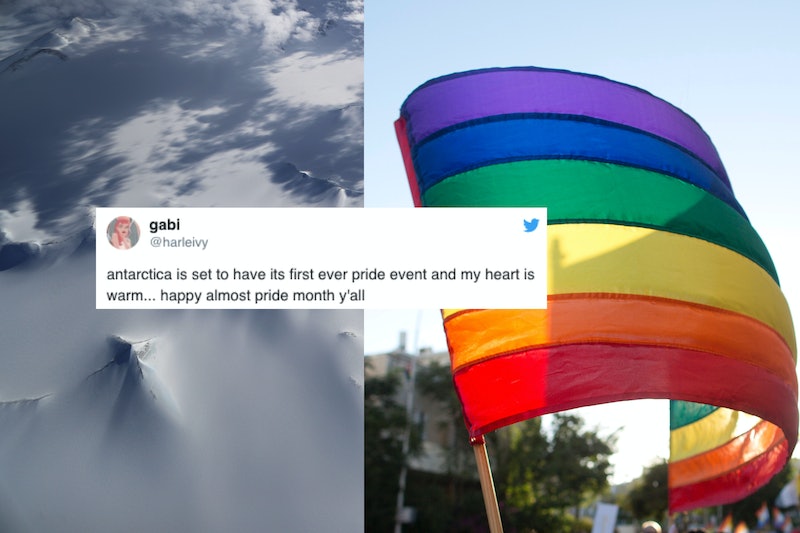 If you live in the U.S., chances are you celebrate Pride Month in the sweltering heat of summer. But for some research station crew members throwing a Pride celebration, things are looking just a bit colder. That's right: Antarctica is having its very first Pride party, y'all, and we can't even be a little chill about it.

Employees at the McMurdo Station are planning to hold the continent's first Pride event June 9, at a bar on-station, according to Shawn Waldron, an organizer who works with the station’s support crew. Waldron told Earther that the team is "still figuring out the logistics," though they did have to kick things off a couple of months early, taking a team photo with the Pride flag in April "before the darkness that envelopes [sic] the continent every year from June to September arrived."

The fact that they'll be celebrating in the dark doesn't seem to be putting a damper on anyone's pride, though. "It's important to celebrate pride in the extreme places and the mundane," Evan Townsend, another organizer who works as a support contractor, told Earther. "Every person who celebrates is another example of who queer people are and what we can do. It's a chance to remind the world, and ourselves, that our potential is limitless and is in no way inhibited by our sexuality or gender identity."

Waldron told NewNowNext that before he left for McMurdo, he was worried about being alone. "My biggest fear before I left was, I’m going to be the only gay person, there’s going to be no one else here," he said. "I was wrong."

It should be noted that though this is Antarctica's first official Pride party, it was "dubbed the first gay-friendly continent by humanitarian organization Planting Peace" back in 2016, The Hill reported.

There are currently 133 crew members stationed at McMurdo, and of those 133, about 15 are queer, Earther reported. The 133-person crew is largely made up of the station's year-round support staff, who during the high-capacity summer months, when more than 1,000 people live and work at the station, "are charged with maintaining the galley, bartending, and cleaning the bathrooms," according to Earther.

Townsend told Earther that because there's so many queer staff members, "topics like LGBTQ custody battles are welcome at the dinner table." And Townsend told Mic that the station has had a few LGBTQ social events prior to Pride, and started to establish an internal queer community. "Because it’s such a small community, it’s easy to find out who is and who isn’t in the LGBTQ community," he explained.

Another support staff member, Mark Vogler, told Earther that "the continent [is] full of pride year-round," and that when he first arrived at McMurdo, "he was surprised to see two men dancing together at a bar on the station," and that it was just...normal.

"We don’t have to just go to the gay resorts," Vogler told Earther. "We can be open and out anywhere, and if that means being in minus 50-degree weather, I’m not the only gay there." He added that "[i]t's nice to have a place you can truly be yourself, talk about your boyfriend, girlfriend — or husband and wife — with peers."

Zeke Stokes, vice president of GLAAD, told Mic that the McMurdo crew's celebration is encouraging. "With crackdowns and rollbacks to LGBTQ equality happening around the globe, it’s heartening to see this showing of pride from one of the most remote places on the planet," he said.

Antarctica may be pretty dang cold, but the queer folks who currently inhabit it certainly have no trouble melting our hearts.