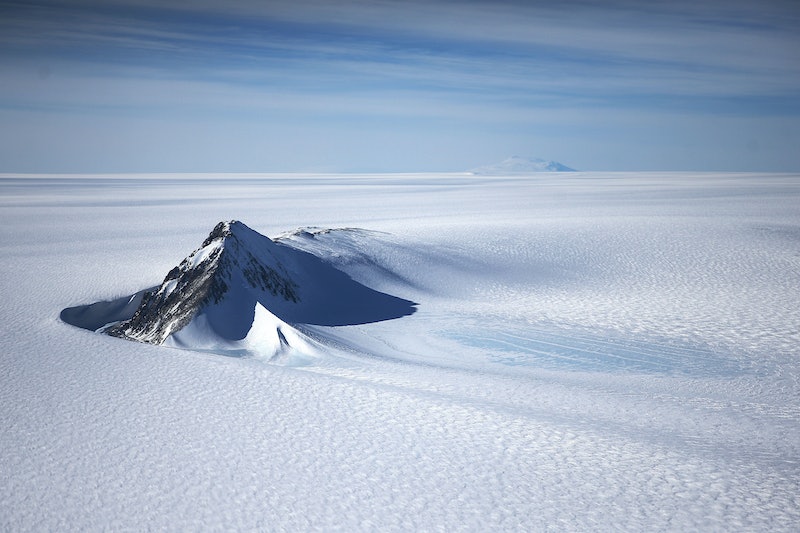 Scientists have made a new discovery in Antarctica — and it could have some pretty significant implications. Antarctica's Thwaites Glacier has a gaping hole, according to a new study published in Science Advances on Jan. 30. This hole means that the glacier is melting much more quickly than expected. Notably, the glacier's rapid melting — and potential future collapse — could raise sea levels and possibly profoundly impact coastal cities.

As NBC described, the study revealed that the hole, or cavity, in West Antarctica's Thwaites Glacier is about 1,000 feet deep and six miles long. Indeed, as the outlet noted, the cavity is so large that it could contain almost two-thirds of Manhattan. NBC indicated that the cavity was discovered using data from satellites as well as from NASA's operation IceBridge program, which relies on ice-penetrating radar to examine glaciers.

Forbes reported that the discovery of the cavity reveals that much of Thwaites' melting has occurred recently. Indeed, the study noted that the cavity can hold 14 billion tons of ice — and most of that ice melted within the past three years. Ted Scambos, a senior research scientist at the National Snow and Ice Data Center who wasn't affiliated with the project, told NBC that melting ice from Thwaites contributes to around four percent of global sea level rise.

As the outlet noted, if the glacier eventually completely collapses, sea levels would rise by around two feet — something which current scientific models predict could happen in 50 to 100 years. Moreover, as Forbes described, if Thwaites collapses, it's possible that nearby glaciers would slide into the ocean and then melt as well, since Thwaites currently acts as a barrier preventing them from reaching the ocean. If these glaciers melted, sea levels would rise by another eight feet, Forbes reported.

Rising sea levels pose a significant threat to coastal cities around the world, which could face severe flooding as a result, NBC noted. For example, the outlet stated that New York City has more people living in high-risk flood areas than any other city in the United States. Forbes emphasized that severe flooding could displace tens of thousands of the city's residents, as well as those in other coastal cities, like New Orleans.

Eric Rignot, one of the study's authors, emphasized to the New York Times that sea level rise from glacial melting is caused by rising ocean temperatures stemming from global warming. “This is the ocean eating away at the ice," Rignot told the paper. "It’s a direct impact of climate change on the glacier.”

Because the melting of the Thwaites Glacier could so significantly contribute to sea level rise, American and British researchers have come together to launch a project called the The International Thwaites Glacier Collaboration. The five-year initiative will examine water currents as well as "the stretching, bending, and grinding of the glacier" to more fully comprehend the melting rate of the glacier, according to the project's website. NBC noted that researchers will rely on seals outfitted with special sensors, weather stations, and robots for data collection.

Overall, scientists' discovery of the large cavity in the Thwaites Glacier has certainly been eye-opening, as it demonstrates just how quickly glacial melting could start to significantly impact cities along coastlines. It remains to be seen what further insights the International Thwaites Glacier Collaboration will discover as scientists kick off their five-year project to investigate the issue.