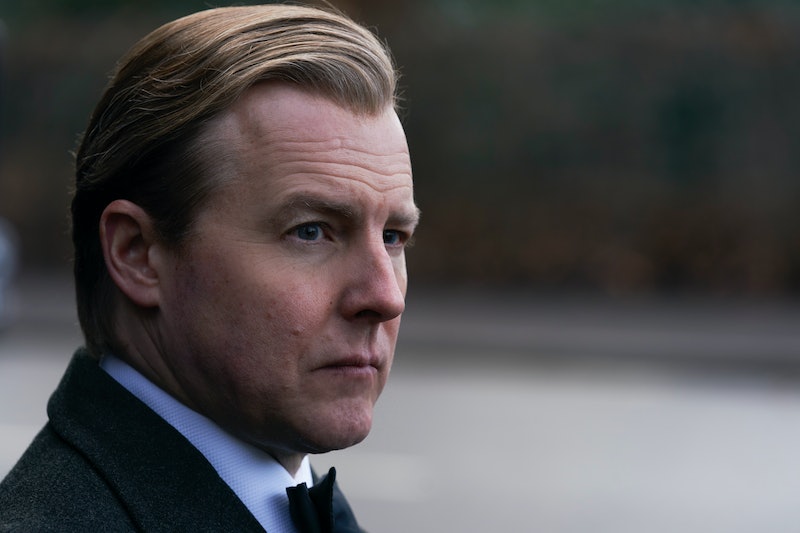 The Crown's third season touches on the scandalous true story of Anthony Blunt, a Soviet spy who worked as the Surveyor of the Queen's Pictures from 1945 to 1973. As outlined by the New York Times, Prime Minister Margaret Thatcher exposed Blunt in November 1979, but he'd secretly confessed over a decade earlier, in 1964, after an American named Michael Straight accused Blunt of trying to recruit him in the '30s. At the time, the British government granted Blunt immunity in order to coax him into confessing. It wasn't until Thatcher brought the truth to light that the knighthood he had been granted in 1956 was revoked.

What's not covered in The Crown is how Blunt came to be a spy in the first place. According to the Guardian, he was recruited by the NKVD agency while he was studying at Cambridge. He joined the British Army in 1939 and later MI5, passing information to the soviets throughout World War II.

"In the mid-1930s it seemed to me and to many of my contemporaries that the Communist Party and Russia constituted the only firm bulwark against Fascism, since the Western democracies were taking an uncertain, compromising attitude towards Germany," Blunt once explained of why he started working with the Soviets, per the Times.

In 1951, he helped Guy Burgess and Donald Maclean — two British diplomats who were also secretly Soviet spies — leave the country. They were part of a ring known as the Cambridge Five, which consisted of Blunt, Burgess, and Maclean as well as Kim Philby and John Cairncross. Years after Burgess and Maclean left England, Philby defected to Russia in '63. Cairncross remained in the country, but never faced prosecution.

In the above 1979 video, Blunt claimed that no lives were put at risk because of his actions. "The information that I passed to them was almost exclusively about German intelligence services and that was largely information which...a lot of people at MI5 thought ought to have been given officially," the former art historian said. "I had in fact no information about...British agents at all."

Blunt resigned from the British Academy after Thatcher exposed him, but he was never prosecuted. He died of natural causes in March 1983 at the age of 75.

More like this
'The Crown' Season 6 Has Suspended Filming "Out Of Respect" For The Queen's Death
By Bustle Staff
Helena Bonham Carter Doesn't Think 'The Crown' “Should Carry On"
By Sam Ramsden
'That '90s Show' Is Officially Coming Back For Season 2
By Gretchen Smail and Grace Wehniainen
The 'Freeridge' Cast Shared Their Hopes For A Potential Season 2
By Grace Wehniainen
Get Even More From Bustle — Sign Up For The Newsletter
From hair trends to relationship advice, our daily newsletter has everything you need to sound like a person who’s on TikTok, even if you aren’t.