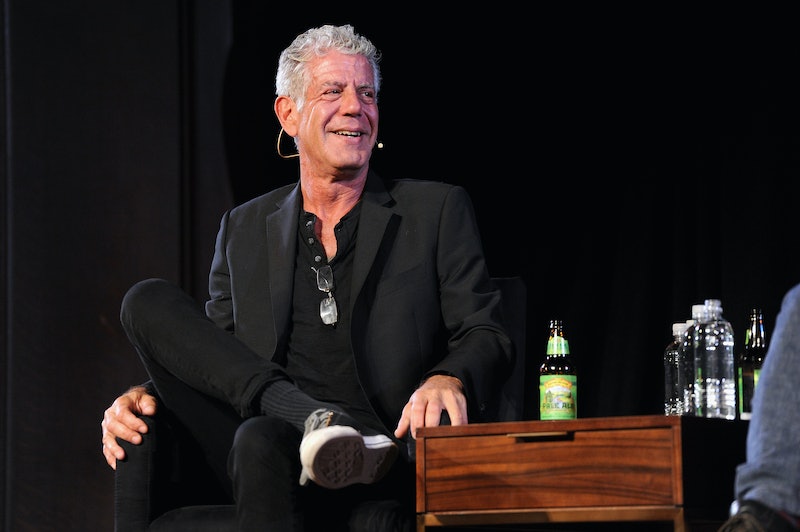 Wishing you were enrolled in a small Louisiana university is a very particular feeling, but this news will do it. Nicholls State University will feature an Anthony Bourdain class as part of its spring semester. Created by the director of the Thibodaux, Louisiana college's film studies program, Todd Kennedy, the class will not be a study of Bourdain's life on its own, but rather a look at how the chef and TV host was inspired by film and literature in creating his television series A Cook's Tour, No Reservations, and Parts Unknown.

As fans of the shows know, the episodes were often very cinematic — some much more clearly than others. For instance, the Jamaica episode of Parts Unknown that was inspired by James Bond or the Fellini-inspired black and white Rome episode of No Reservations. Bourdain and his shows made many connections like these over the years, and that's what Kennedy plans to explore with his course, Anthony Bourdain and His Influencers.

The professor spoke to CNN about the class and how it all came together. He explained that the idea arose after Bourdain's death in June. "I started thinking about the way Bourdain encapsulates so much of everything we do in film studies, in English studies, in cultural studies and what I do for a living."

Each class will be centered around an episode from one of Bourdain's shows, and students will view a film (such as Apocalypse Now) and/or read a book (such as Legends of the Fall) that seems to have influenced it. For example, Kennedy said of a class focused on a Vietnam episode, "By the end of the week, we'll be debating Vietnam through the lens of how Anthony Bourdain saw it, but also with an awareness of what influenced Bourdain's perspectives of Vietnam before he ever got there."

In addition to the materials that influenced Bourdain, the syllabus also includes one of the chef's own books, his memoir Kitchen Confidential. The course is part film studies and part English, so students will have some wiggle room as to where they apply their three credits. There will also be a half-semester version of the course. "And for clarity, in addition to the normal, in-person class in Spring of '19, there will also be a 1/2 semester section offered through 'Nicholls Online' in the first half of spring," Kennedy tweeted.

Kennedy has been tweeting quite a bit about the class and the overwhelming reaction the news has received, and he also posted and official description of the class, which reads in part:

Almost every episode of Bourdain’s shows directly reference and/or pay homage to a major work of literature or film as he develops his own visual and narrative argument about culture, politics, food, art, and the interactions therein. This course will pair Bourdain’s work with the writings and films that influenced him, connecting ways of understanding the world around us through the lens of a transformative writer and public figure.

For now, Kennedy has his work cut out for him. "Just spent a whole day planning themes/ideas/material," he tweeted. "This course is going to be a whopper of work for me. The more I unravel what I want to do, the more complex I find @Bourdain's work to be." Kind of makes you want to take the class yourself, doesn't it?