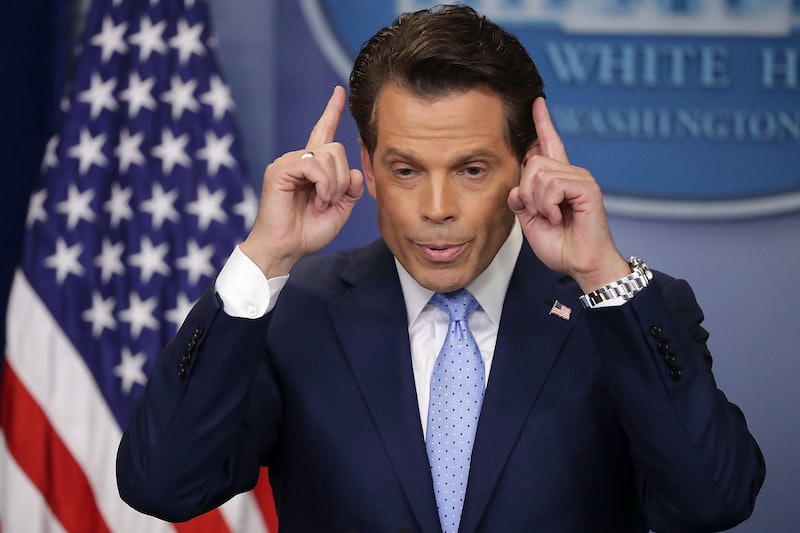 On Friday, Wall Street financier Anthony Scaramucci was announced as the White House's new director of communications, a new hire that reportedly spurred the resignation of Press Secretary Sean Spicer. The 53-year-old has no previous experience in government, having previously worked in business and as a host on the Fox Business Network. And, as internet sleuths have noted, some of Scaramucci's old tweets include anti-Trump and pro-liberal sentiments, a somewhat awkward reality given his new job.

Back in August 2015, while on Fox Business, Scaramucci called his new boss a "hack" and accused him of being a "bully" due to critical remarks he made about hedge fund managers. Scaramucci actually addressed the matter of some of his anti-Trump rhetoric during his introductory press conference, calling it "one of the biggest mistakes" of his life and attributing it to his political inexperience.

The matter of his old tweets goes even further, however, because they include not just criticisms of Trump, but statements about policy that would probably place him somewhere in the neighborhood of centrist big-money Democrats, or quite liberal Republicans. For instance, he has voiced support for gun control, same-sex marriage, abortion rights, and policies to address climate change.

Voted For Clinton And Obama

Now, this might all sound foreboding for Scaramucci's chances of sticking in the job, or holding Trump's favor as the days and weeks roll by. But the essential, underlying this is this: Since the 2016 presidential campaign season really started rolling, Scarmucci has been a vocal and unapologetic Trump booster in every sense of the word.

His language when discussing the president during Friday's presser made this all the more obvious. He repeatedly professed his "love" for the president, and also insisted (contrary to an immense amount of polling data) that he's "loved" by the American public, too.

He even gushed over Trump's athleticism, which is not something you typically hear that often ― he claimed to have once seen Trump throw a football through a tire, as well as sink three-foot golf putts, which for the record, is not a particularly impressive feat for someone who spends as much time golfing as Trump does.

In other words, although his past personal policy beliefs might not square perfectly with those of the GOP establishment or of Trump himself, you can feel virtually guaranteed that these past tweets and comments aren't going to be a problem. Because when it comes down to it, Scaramucci has made it clear that he's a Trump man now, and there might not be anything more important to his long-term job security.