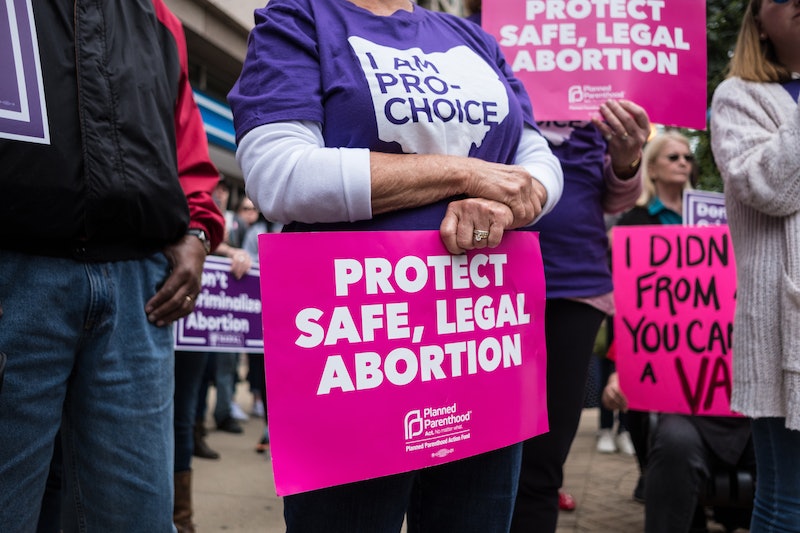 Rather than ban abortion outright, many states are taking an approach that advocates say is arguably more dangerous: they're passing bill after bill to limit access to the procedure while also trying to criminalize doctors who provide it. Two anti-abortion bills in Ohio and Pennsylvania are an example of the latest attempts by state lawmakers to slowly chip away at access to abortion. Unlike outright bans on the procedure, though, the reason bills like these are dangerous has to do with more than overturning Roe V. Wade. One advocate called the bills "insidious" attempts at deceiving the public about what abortion is — so that they will accept lawmakers' efforts to make it a crime.

The two bills went viral over the weekend after The Guardian published an article on Ohio's bill, House Bill 413, which state legislators introduced on Nov. 14. The bill would levy criminal penalties against people who receive abortions and the doctors who provide them, and would also require that doctors attempt to "reimplant" ectopic pregnancies — a procedure that does not exist. In Pennsylvania, GOP lawmakers also passed House Bill 1890 last week, which would require health care facilities to bury or cremate fetal remains after an abortion or miscarriage.

Kellie Copeland, executive director of NARAL Pro-Choice Ohio, tells Bustle both of the bills are meant to stigmatize abortion and make people who receive abortions feel bad. "They want to harm them emotionally — that's why they introduced these bills," she says. "They also want to make it very difficult for medical providers to provide this care to their patients by increasing costs, by creating criminal penalties."

The Ohio bill starts off by equating a "fertilized egg" to an "unborn child," despite the fact that whether an egg is a person is a legal question and not a scientific one, Copeland points out. Then the bill includes criminal penalties. Doctors, pregnant people, and children as young as 13 who "perform or have an abortion" could be charged with "abortion murder," a phrase created for this bill, which would be punishable by life in prison. The bill also invents a new charge called "aggravated abortion murder," would be punishable by life in prison or death.

Copeland says the creation of a new term — "aggravated abortion murder" — is part of the overall anti-choice strategy to "change public perception of what abortion care is" by using terms that aren't supported by medicine or the law. (For example, the term "late-term abortion" was created by anti-choice advocates and not medical providers.) Now, the made-up term "aggravated abortion murder" will be "repeated over and over again in reporting as part of their campaign to further stigmatize and demonize abortion providers and people who seek that care," she says.

The bill also requires that doctors attempt to "reimplant" ectopic pregnancies into the uterus or face charges of "abortion murder." The problem, according to physicians who have spoken out on Twitter, is that the "reimplantation" procedure doesn't exist. That portion of the bill is based on an earlier bill that Ohio state lawmakers introduced in May 2019, HB 182, which required insurance companies to offer coverage for the nonexistent treatment.

Grossman said the treatment for an ectopic pregnancy is medicine and surgery to remove the pregnancy. "An ectopic pregnancy cannot be 'reimplanted' into the uterus," he wrote. "So I would suggest removing this from your bill, since it’s pure science fiction."

Ohio's new bill, HB 413, adds onto HB 182. In order for a physician to avoid facing criminal charges under the bill, they must take "all possible steps to preserve the life of the unborn child, while preserving the life of the woman," it states. "Such steps include, if applicable, attempting to reimplant an ectopic pregnancy into the woman's uterus."

Dr. David N. Hackney, who specializes in maternal fetal medicine, wrote about the nonexistent treatment on Twitter. "I don’t believe I’m typing this again but, that’s impossible. We’ll all be going to jail."

Pennsylvania's new bill is different than Ohio's, but it still includes penalties for health care providers. HB 1890 requires that after "fetal death," providers cremate or bury fetal remains if the parent chooses not to. Rolling Stone notes that the bill's definition of fetal death could apply to fertilized eggs that are not yet a fetus and frozen fertilized eggs from IVF. If providers don't properly dispose of the remains, they could face fines of $50-$300 or up to 30 days in prison.

Laws regulating fetal remain disposal have been proposed and passed in states across the country. The Supreme Court allowed a similar law in Indiana to stand, ruling that it didn't create an undue burden on people seeking abortion and that states have an interest in the proper disposal of fetal remains, according to NBC News. Justice Ruth Bader Ginsburg dissented, writing, "The case implicates the right of a woman to have an abortion before viability and to obtain it without undue interference from the state."

Copeland says laws like Pennsylvania's are an outgrowth of the heavily doctored and widely discredited videos about Planned Parenthood's disposal of fetal tissue. Disposal laws imply "that somehow abortion providers don't already take into account the wishes of their patients," she says. "That's false. Abortion providers work with their patients on these types of issues when they are requested, and no legislation is required to allow that."

The intent of the Ohio and Pennsylvania bills also targets abortion differently than that of the near-total bans proposed in Alabama, Georgia, and Ohio, which also has a six-week abortion ban that a judge blocked from going into effect. Bans are part of anti-choice advocates' legal strategy to overturn Roe v. Wade. The idea is that one of them will be challenged and will eventually land in front of the conservative-majority Supreme Court. Bills like those proposed in Ohio and Pennsylvania, Copeland says, are part of a systemic plan to criminalize the procedure and also shift public opinion about abortion by using inaccurate and misleading language.

Anti-choice advocates and politicians want the public to "be against people who provide [abortion] care and the people who receive it," Copeland says. Then, when lawmakers introduce criminal penalties for abortion providers and patients, the public will go along with them. She notes that since Roe v. Wade, the American public has never supported the government interfering in medical decisions or making abortion a crime.

"They are trying to weaponize the government against abortion providers and their patients ... in terms of rhetoric and the criminal code, and it's wrong," Copeland says.

More like this
25 Inspiring Quotes From Black Women To Celebrate Black History Month
By Kyli Rodriguez-Cayro and JR Thorpe
Watch Jacinda Arden’s Devastatingly Honest Resignation Speech
By Sam Ramsden
What The UK Blocking Scotland’s Gender Recognition Bill Means
By Sam Ramsden
Twitter Is Identifying With Sally Field & Jane Fonda’s Friendship In New Viral Video
By Jake Viswanath
Get Even More From Bustle — Sign Up For The Newsletter
From hair trends to relationship advice, our daily newsletter has everything you need to sound like a person who’s on TikTok, even if you aren’t.