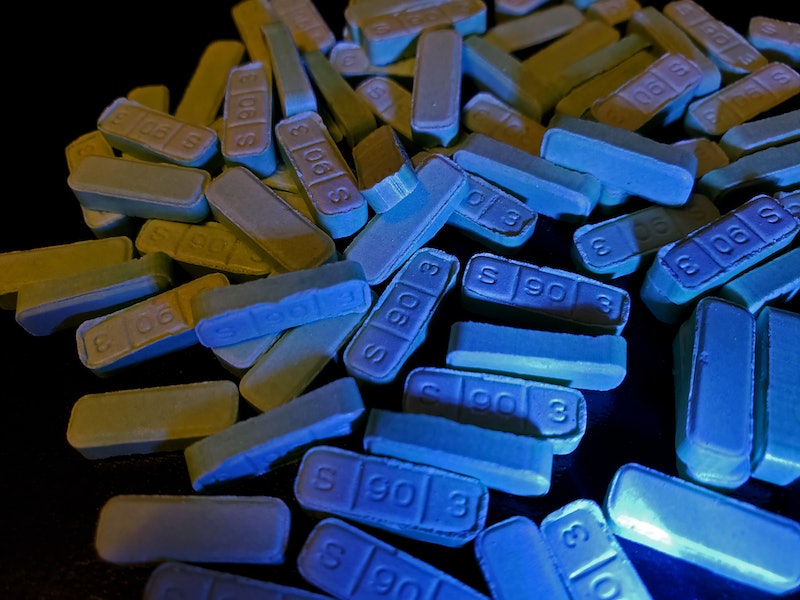 Whether it's social media talk or lyrics from your favourite SoundCloud rapper, anti-anxiety medications are having an unfortunate pop culture moment. Nowhere is this more obvious than the statistics surrounding Xanax. The drug — which is formally known as alprazolam — has been linked to youth overdoses, dangerous dark web sales, and more besides. And a new study has confirmed that Xanax misuse in the UK is a problem that needs urgent attention.

Xanax forms part of a group of medications called benzodiazepines. As mental health charity Mind explains, these "act as a sedative", working to reduce anxiety symptoms and improve sleep. They can work incredibly quickly — usually within 30 to 90 minutes, according to the NHS. But benzodiazepines can also become addictive, meaning that they are only prescribed for short-term use.

Only four benzodiazepines are currently available on the NHS, states a new British Journal of Clinical Pharmacology study. Diazepam (also known as Valium) is the most frequently prescribed one. But Xanax — which is around 10 times stronger — can only be obtained via a private prescription, writes Public Health England. Due to its frequent citations by certain celebrities and fast-acting effects, its popularity has increased, leading to a rise in illegal sales.

There have been several media reports into "Generation Xanax". As the Guardian unveiled, the UK is the world's second biggest market for untraceable online Xanax sales. Only the U.S. (which commonly prescribes it) has higher figures. In December 2018, the Telegraph reported that the number of young people being treated for anti-anxiety medication addiction had doubled. And in February 2019, the BBC revealed that at least 204 UK deaths were linked to Xanax misuse since 2015.

But the level of research into non-medical use of Xanax in the UK is limited. So a group of researchers set out to find just how many people are using the medication for an illegal "high". A total of 10,019 UK adults were surveyed about their use of Xanax (alprazolam) and/or Valium (diazepam). Results were weighted to allow the survey to represent almost 53 million UK adults.

Respondents were asked if they had ever used Xanax or Valium for a non-medical reason in their lifetime. (For the purpose of the study, non-medical use was defined as "using a medication without a doctor's prescription or for any reason other than what was recommended by [a] doctor.")

The estimated national prevalence of non-medical Valium use was higher than non-medical Xanax use (1.3 percent compared to 0.32 percent). Out of those who answered "yes" to non-medical Xanax use, almost 40 percent admitted it was to "get high." Almost 34 percent said the same for Valium. Researchers also noted that the number of men using Xanax non-medically in their lifetime was significantly higher.

Participants were also asked about recent non-medical use of both medications. In this instance, "recent" was classed as use within the last 90 days. Although more people once again fell into the Valium category, there was a distinct difference in recent Xanax users' ages. No one over the age of 45 admitted to using the drug non-medically in the past 90 days. The highest number of "yes" respondents fell into the 16-to-24 age bracket. When estimating a national figure, researchers concluded that more than 26,000 young people have recently non-medically taken Xanax.

"Our study suggests that although NMU of alprazolam is less common than NMU of diazepam in the UK, it is nevertheless a significant issue, and it appears more prevalent in younger adults," the authors wrote. "Further research is urgently needed to further explore the motivations for and appeal of alprazolam for non-medical use among young adults." They added that "this will enable appropriate public health interventions to prevent short-term toxicity and long-term dependence" among younger users.