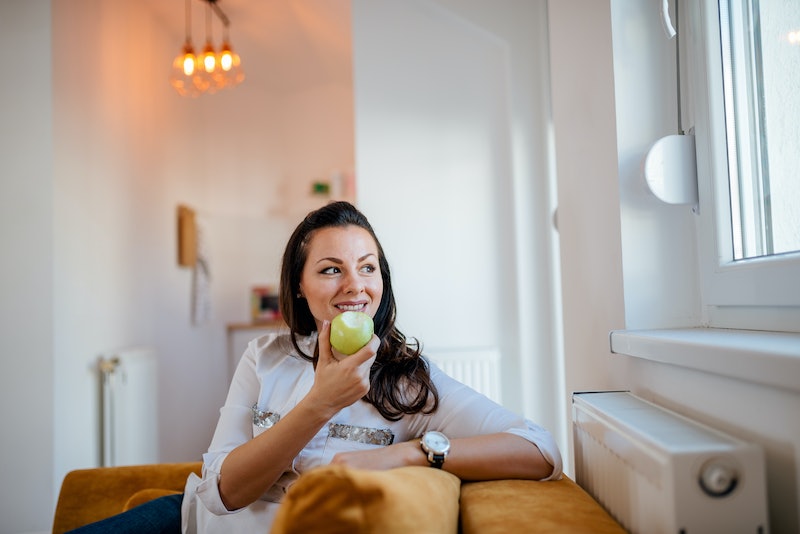 The old adage, "an apple a day keeps the doctor away," might actually be true, depending on how you eat the apple. There's no doubt that cutting your apple up into little slices definitely makes it easier to eat. But if that's your jam, you may be missing out on all the nutrients apples have to offer. Apple cores may contain probiotic bacteria, a new study says — so tossing the core means you're tossing those gut-boosting bugs, too.

A study published in the journal Frontiers in Microbiology revealed that apples are a lot more complicated than you thought. Researchers from Graz University of Technology in Austria analyzed the bacteria from both conventionally and organically grown apples and found that a typical apple contains around 100 million bacteria. Most of these bacteria are found in the seeds. So if you're not eating the core of your apple, you're only getting around 10 million bacteria.

And as it turns out, this whole bacteria thing is all about gut health, and it's just as complicated as apples. If you're late to the gut-health party, medical journal The BMJ reported that having a diverse gut microbiome can potentially protect you from autoimmune diseases and cardiac conditions. This means you need a lot of different kinds of bacteria to maintain a healthy gut microbiome. In this regard, not all apples are created equal.

"Freshly harvested, organically managed apples harbor a significantly more diverse, more even and distinct bacterial community, compared to conventional ones," senior study author Gabriele Berg, a professor at Graz University of Technology, Austria, said in a press release. "This variety and balance would be expected to limit overgrowth of any one species, and previous studies have reported a negative correlation between human pathogen abundance and microbiome diversity of fresh produce." So when it comes to apples, more bacteria is better (eat the whole thing) and diverse bacteria is best (go organic when you can).

For those who were told as children that eating an apple seed would result in your growing your very own apple orchard in your stomach, your parents lied to you. If your 'rents really wanted to scare you, they may have even told you that apple seeds are poisonous. In fact, there's still a myth in my family that persists to this day that an old-timey relative allegedly died from eating too many green apples.

As a kid who watched Snow White on the regular, I believed this story for years because, in the Disney movie, the wicked queen poisons Snow White with an apple. While the seeds of some fruits, including apples, contain small amounts of amygdalin, which your body converts to cyanide if the seeds are chewed, it's highly unlikely that you could poison yourself by eating an apple core.

According to The Naked Scientists, a website run by Cambridge University physicians and researchers, in order for you to have a toxic reaction to eating an apple core, you would have to chew 143 seeds at once. As a typical apple contains around eight seeds, this means not only would you have to eat 18 apples in one sitting, you'd have to chew each seed in each apple and swallow them all. Chew is the keyword here. If you just swallow apple seeds, you're going to be totally fine because the protective coating on the seed keeps the amygdalin inside.

The bottom line? You're a grown-up who has a lot of things to worry about, and how to eat an apple shouldn't be one of them. But if one of your 2019 goals is to make sure your gut is healthy AF, eating the right kind of apples the right way can give you an edge because apples are basically gut-health superheroes. And let's face it, we could all use more superheroes in our lives. #TheMoreYouKnow