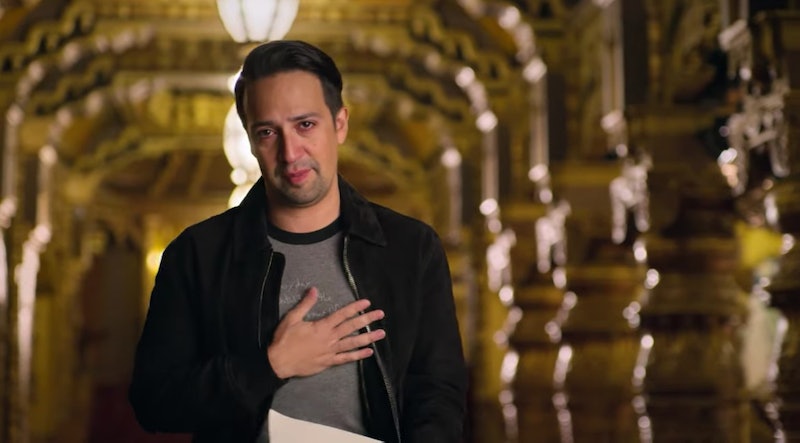 Break out your old stationary and get ready to cry, because AppleTV+'s new show Dear... is bringing fan letters to life, and it will make you want to write to your fave. The trailer for the series was released on Thursday, May 21, and it's definitely a tearjerker. Dear... shows well-known public figures (and even iconic characters like Sesame Street's Big Bird) reading letters from fans explaining how much these famous individuals have impacted their lives.

In the trailer, alongside the other celebs featured, Hamilton's Miranda is seen reading a letter that brings him to tears. "There's a line from In the Heights that says, 'Wherever we go we rep our people.' Because of you wherever my life takes me I will always represent my people," Miranda reads, crying int he clip. The Hamilton scribe tweeted out the clip, writing, "I cried. So. Much. Reading. These. Letters." It's safe to say that the docuseries will have viewers crying, too.

Dear... is all about showcasing how people like Winfrey, Raisman, Lee, Goodall, and more truly change the lives of everyday people. "Every time you make something, you're throwing rocks in a pond and you have no idea the ripples that are gonna come back to you," Miranda says in the trailer.

The series begins streaming on June 5 and comes from Emmy-winning filmmaker R.J. Cutler (American High). Based on the trailer, Dear... is going to be an emotional whirlwind and might even have you digging up your old fan letters, or even writing brand new ones.