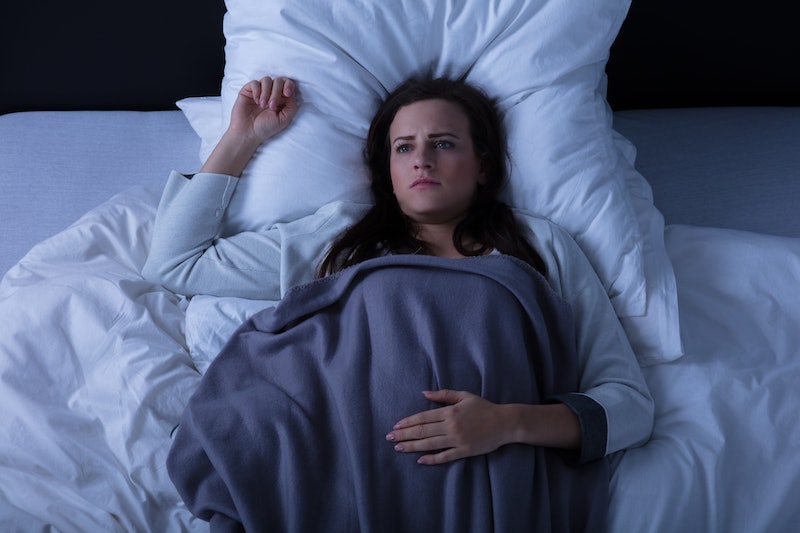 When someone finally clued me in to what happens when Mercury is in retrograde a few years ago, it felt like a major game changer. Suddenly, the feelings I'd had about experiencing periods of bad luck or being stuck in a rut for a few months at a time didn't seem so out of the realm of possibility. During Mercury's retrograde, all bets are off. However, considering the most recent Mercury retrograde ran from Mar. 22 to Apr. 15, we're all in the clear, right? Sure, Mercury retrograde is over... but don't relax yet. Mercury retrograde's post-shadow period, aka a two-week period after the retrograde that is also known to affect our experiences, is taking place between Apr. 16 and May 4 — and it's gonna feel just like the retrograde did.

In order to understand what the post-retrograde phase looks like, it's important to first grasp the basics of the better-known havoc-wreaking astronomical phenomenon: Mercury retrograde. Per Mother Nature Network, while Mercury is in retrograde, it appears to move backward. Planets typically move around the sun from east to west, but at several points throughout the year, Earth passes Mercury in its orbit, creating an illusion that the other planet is going from west to east. Because astrologers understand Mercury to rule communication, travel, and learning, its retrograde can easily be blamed for plenty of snafus and inconveniences.

The most recent retrograde began on Mar. 22 and will finish up on Apr. 15, after which we'll move into a phase we call retroshade. This is essentially a shadow period, during which time Mercury transitions out of its backspin. Retroshade lasts for two weeks, and because it has its own emotional and behavorial effects, it's more or less just an annoying extension to something that is, in itself, already a huge pain. This time around, retroshade should last until May 5, according to Astrology Horoscope Readings, so if you can hang in there for just a little while longer, life — and Mercury — should return to normal soon enough.

One thing we all will have to be thankful for when retrograde turns to retroshade is the break in mental fogginess. Retrograde is marked by feelings of confusion and uncertainty, and the Mercury shadow period tends to introduce some much-needed clarity. It's often a time for moments of reckoning and revelation. All of the bewildering emotional garbage that comes with retrograde clears up, and you're left with a stronger understanding of difficult situations and relationships. Basically, life will still seem pretty weird and you might still be off your game, but you'll at least have a firmer grip on things. Baby steps, amirite?

As long as we're still dealing with Mercury's shadow period, AstroStyle recommends that we "take the necessary Mercury retrograde precautions, moving ahead at a gentle clip and not rushing into anything binding." Stay ahead of potential issues with technology and communication by keeping on top of all online accounts and being extra thoughtful before you speak, text, or send an email. After a few weeks of operating in a mental fog, it might be tempting to suddenly make decisions because that regained clarity feels so darn good — but it's still best to take things slow. Embrace the new information you're taking in, but wait until mid-June to take action on it.

We're inching closer and closer to normalcy, people, so keep that seatbelt on and continue riding out the weirdness. Don't be surprised if you're not feeling back to your usual self the minute Mercury moves out of retrograde. That pesky two-week shadow period will create its own frustrations and might leave you wondering if your luck could really be so terrible or if you could actually get so much bad news in such a short period of time. In the meantime, we all have May 5 to look forward to!