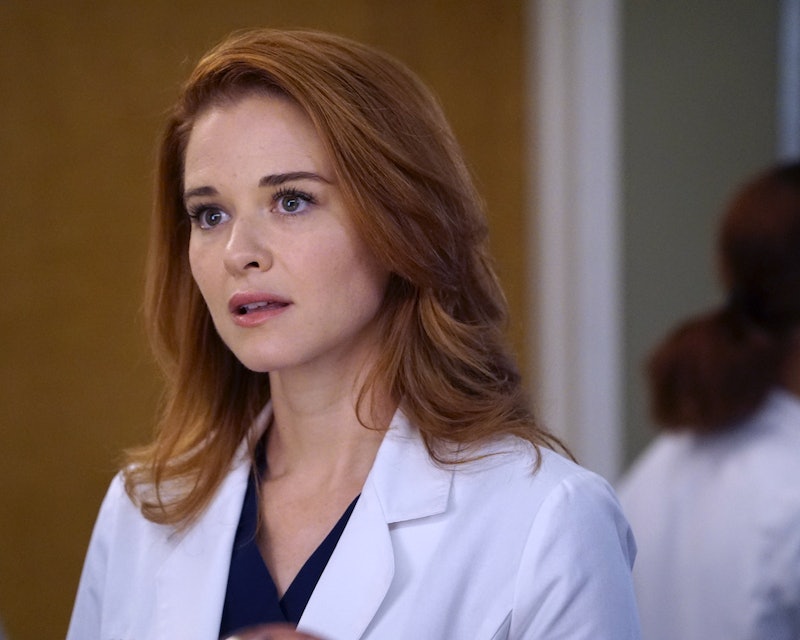 Knowing that the hammer is coming doesn’t make it any easier — viewers know that both Sarah Drew (aka April Kepner) and Jessica Capshaw (that’s Arizona Robbins) are leaving Grey’s Anatomy. It was announced long ago, and it still stings. And, like anything else on Grey’s Anatomy, their fates are out of fans' control, and it’s so hard to say goodbye. Well, there may be one big hint as to how April exits the show — April will die on Grey’s Anatomy, if one episode synopsis has anything to say about it.

Networks send out press releases a few weeks before an episode of a show airs just so recappers, writers, and other media know what’s coming down the stretch. That’s standard practice. And they’re usually kind of vague, given that there can’t be too many spoilers. But the press release for the May 10, 2018 episode — the penultimate of Season 14 — has one big clue about the fate of our favorite doctors. It says, “One of Grey Sloan Memorial's own is seriously injured, making the team reflect on what is truly important to them. Meanwhile, Nicole Herman pays a visit to Grey Sloan and talks to Arizona about an exciting opportunity.”

Let’s break this down. We know that Arizona and April are definitely leaving the show, so let’s say that the “serious injury” part relates to them. Now, it can’t be Arizona, because the synopsis says that she’ll be talking to Geena Davis all episode, and if it were Arizona in the accident, it wouldn’t say her name later on. You read me loud and clear? Next, there are no other big departures scheduled for Grey’s Anatomy at the end of Season 14 — unless something happens and it’s a huge surprise — so that serious injury must be April. And since this is the second-to-last episode of the season, my educated guess is that April meets her eventual fate in the last episode, finishing out Season 14. April will buy the farm she came from, which sucks, because it means that she can never come back as a guest star. Unless Grey’s Anatomy wants to pull a ghost Denny thing again, but I hope not.

As far as Arizona goes, she could move to New York City with Sofia — that’s the educated guess for her situation. Sofia misses her other mom, Callie, and she misses her friends and her New York City school. She probably misses those big soft pretzels from the vendors outside the park and waiting in line for everything, too — at least, I know I do when I leave the city for too long. Another option? Arizona brings Sofia home to New York and then travels with Carina back to Italy to live her best Under The Tuscan Sun life. These are both quality options.

It was a real shock when the news came about their departures. Of the decision, Grey’s Anatomy showrunner Krista Vernoff said in a statement per Deadline:

Show creator Shonda Rhimes echoed Vernoff’s sentiments, saying, “It’s always hard for me to say goodbye to any of my characters,” Rhimes said. “Both Arizona Robbins and April Kepner are not only beloved but iconic... I will be forever grateful to both Jessica and Sarah for bringing these characters to life with such vibrant performance and for inspiring women around the globe.”

It’s just so sad when there are so many other characters (cough Owen cough Amelia) that should leave the show first! And it’s sad that April will probably bite the big one on her last turn on Grey’s Anatomy. I hope I’m wrong, but this press release gives a big hint into April’s eventual mortal fate.