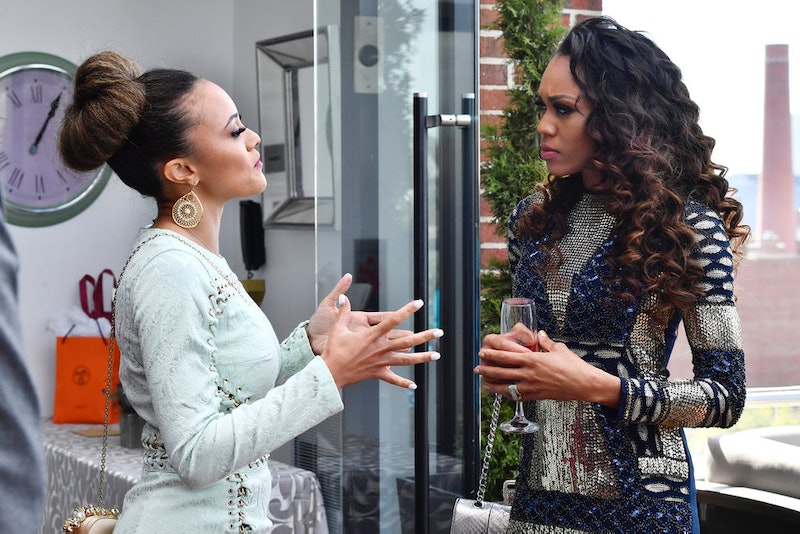 It's been a rocky road for Real Housewives of Potomac stars Ashley Darby and Monique Samuels. The ladies had a lot of Season 3 drama that trickled into Season 4, but where do they stand now? Believe it or not, Ashley and Monique are friends in 2019 and have managed to totally get past their differences.

Their previous strife stemmed from a lunch gone wrong. While driving home from a lunch, Monique got into a minor accident when she fell asleep at the wheel. Monique insisted that she was just tired and stressed from her miscarriage and other things going on in her life, but Ashley insisted that her friend had had too much to drink. Not only that, but Ashley claimed that Monique had a drinking problem for the rest of the season.

Now Ashley knows exactly how Monique felt last season. This season, Candiace Dillard has questioned Ashley's desire to become a mother and called her out for drinking on many occasions. This could have been an opportunity for Monique to rub this in Ashley's face and write it off as karma, but Monique didn't take that approach. After Ashley apologized during the RHOP vacation in New Orleans, the two of them actually moved forward.

In a Bravo blog post about that episode, Monique discussed Ashley's apology. She wrote, "The apology was very sincere and I’m the type of person who tries not to rehash after I’ve forgiven someone. I’m ready to move forward. I never thought I would be this open to Ashley again." In a preview clip from the June 30 episode, Monique and Ashley discussed overcoming the drama. Monique tells Ashley, "I can see a change in you. Once we got on the same page, I'll never bring it up again. I feel like [with] true forgiveness, you don't keep rehashing things." Never bringing up a past problem? That's a very unusual tactic for a Real Housewife.

Ashley reflects on her past mistakes, telling Monique, "If I did have concerns, I should have addressed them differently with you because I now I know what you were feeling. Like dang, this is gut-wrenching. It's hard." Yes, it is, but it seems like a lesson was learned.

Ashley has even more to say during her confessional interview:

"I do have an immense amount of respect for Monique because she realizes that what Candiace is doing to me, I did to her. And she knows how it made her feel, so she's empathizing with me on a level I didn't really expect Monique to have. I know that's what real friendship is."

And, no this was not a short-lived truce. They truly seem like they are in a better place these days. In a May 9 interview with People, Monique revealed that Karen Huger, Candiace Dillard, and Ashley Darby are her only costars that have met her son Chase, who was born in November 2018.

Monique also posted a very excited reaction to Ashley's pregnancy announcement in February and attended the shower for baby Darby earlier this month.

Never say never, especially when it comes to dynamics on Real Housewives of Potomac. Monique and Ashley probably never expected to be friends after their Season 3 turmoil. Now, here they are lifting each other up and supporting each other while their families grow.