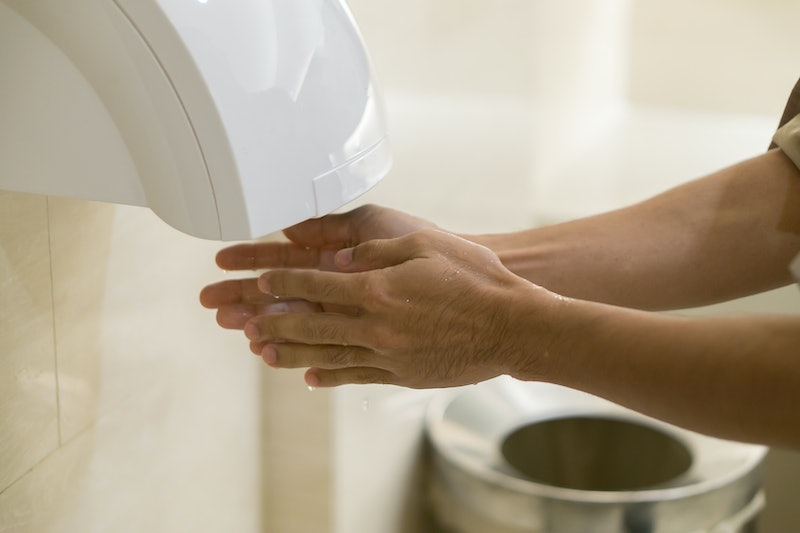 Public bathrooms are already a nightmare for anyone who hates germs, and I usually try to just not think about all of the bacteria around me. I cringe when I sit down on a public toilet seat or turn on a faucet, but a new study has me wondering whether I've been worried about the wrong thing all along. If you're wondering whether bathroom hand dryers are sanitary, you should know that a new study found they may spray you with more bacteria than you'd ever think. Researchers at the University of Connecticut analyzed public restrooms and found that hand dryers were dispersing Bacillus subtilis, a bacteria commonly found in human feces. If you're thinking about switching to paper towels permanently, I don't blame you. I prefer hand dryers because they're less messy and, supposedly, better for the environment, but you may also leave the bathroom with bacteria-covered hands.

To understand the horrifying results, it's important to know how hand dryers actually work. After you poop, the bacteria can end up aerosolized thanks to flushing, especially because so many public bathrooms don't have lids on their toilets. Some hand dryers recirculate the air in the room, which leads to bacteria ending up on your hands after you wash them. The research team swabbed the hand dryers and didn't find enough germs to account for the bacteria output, according to Live Science, so scientists theorized that bacteria in the air is the cause.

The good news is that you aren't likely to get sick from a hand dryer, even though the ick factor is high here. Researchers say the implications of their study are important for health care facilities and other sterilized environments, but most of our immune systems can handle the bacteria that's being blown our way. Adding HEPA filters to hand dryers could be one way to reduce the bacteria that's currently being spread, according to the UConn team. HEPA filters absorb particles and are often found in air purifiers, and the researchers found that bacteria was reduced fourfold after retrofitting hand dryers with the filters.

Researchers already suspected that hand dryers were kind of gross. In February, a picture of a petri dish filled with gross-looking spores that were reportedly from a hand dryer got hundreds of thousands of shares on Facebook. A 2016 study found that jet hand dryers — the ultra-modern dryers that blow a lot of air quickly and actually get your hands dry in seconds — spread 1,300 more virus clumps than paper towels, according to Popular Science. But this study provides evidence of how the hand dryers become contaminated in the first place and steps that can be taken to reduce bacteria.

So should you switch to paper towels? Like I said, I don’t blame you if you have the urge, but hand dryers are arguably better for the environment. Paper towels end up in the trash, while hand dryers don’t create any waste once they're manufactured, shipped and installed. Still, it’s kind of pointless to wash your hands and have them dirtier than they were when you came into the bathroom, so it’s your choice. Quartz says the findings are most useful for people who work in labs and handle harmful pathogens and healthcare facilities with immunocompromised patients — even though no one wants germs on them, you’ll likely be okay if you’re a healthy adult.

And if a bathroom only has hand dryers, you aren’t left with much of a choice. Eventually, manufacturers will catch on and add air filters to hand dryers, but until then, just try not to think about it too much as you’re drying your hands in a public bathroom and use hand sanitizer liberally.