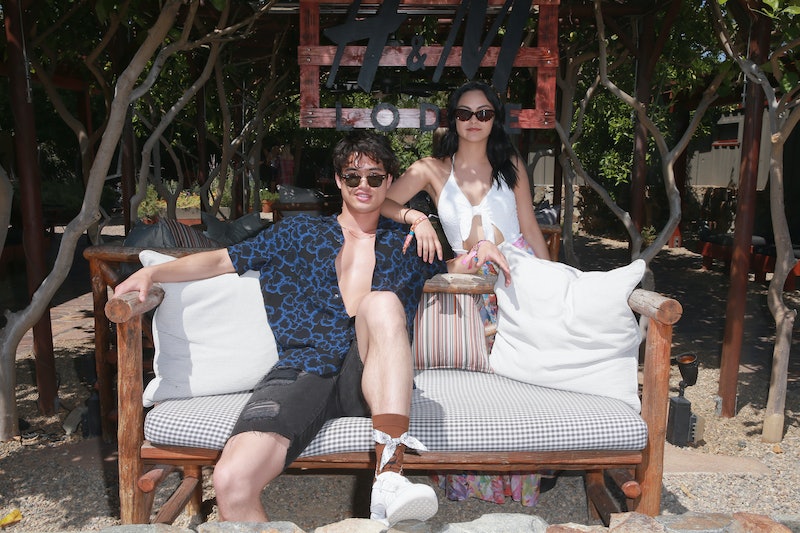 Veronica Lodge may be getting cozy with Archie Andrews in the booths of Pop's lately, but outside of that world, the situation looks way different. One Instagram photo has fans whispering about whether Camila Mendes is dating Charles Melton from Riverdale, E! News reported.

A picture posted to Mendes' Instagram account on Sunday might just be what fans needed to validate the very thing they've been rooting for: that Mendes and Melton are an item. As E! News noted, the two have been seen together for the past month, stirring up romance rumors. Mendes' latest picture shows Melton kissing her on the brow as the two hug each other tightly. Mendes wrote only one word in her caption for the photo: "Mine." The post has gotten nearly 2 million likes as of Sunday evening.

The two were also seen together throughout September. Over Labor Day weekend, the co-stars went on a short trips with some other cast members, including Cole Sprouse, who plays Jughead, E! News reported. Mendes posted a photo from that trip, where she and Melton can be seen lying on the same towel in their bathing suits with his arm placed behind her back. Fans also saw the duo at a movie theater in Vancouver, Canada, E! News noted, and the actors took the time to pose for a photo.

The entertainment outlet reported that a fan who was at the same theater saw the stars snuggle up next to each other. "Camila sat next to Charles and leaned on his shoulder. As the lights were dimming, my friend saw them kiss!" the E! News source said.

The two were also with other Riverdale stars Casey Cott and Lili Reinhart at the theater when they were spotted, according to E! News. The possible co-star coupling of Veronica and Reggie isn't the only Riverdale romance swirling around town right now though; Sprouse and Reinhart, who plays Betty Cooper, came out with their relationship earlier this year, Us Weekly reported. The two were seen holding hands and kissing at San Diego Comic-Con last summer, and this past May, the pair went to the Met Gala together.

Mendes plays Veronica Lodge in the show, a high school girl who moves from New York to the titular town because of her father's arrest and incarceration. Her character is currently dating Archie Andrews, played by KJ Apa, but of course, Mendes' social media highlights seem to be reserved mainly for Reggie. Melton, 27, replaced the character of Reggie, captain of the Riverdale High School football team, during the second season. Reggie had previously been played by Ross Butler, who left the show to focus on other projects, notably his role in Netflix's 13 Reasons Why, according to Express.

Mendes was previously dating Victor Houston, an old friend from Florida, according to Us Weekly. The two split in late August.

Mendes' closeness with Melton may have started in the summer, when she defended him after his old tweets mocking women's weight resurfaced.

“He was devastated — he felt really sorry about it and he called me personally and he said, with everything that I stand for, [that] he’s really sorry,” Mendes, a body positivity advocate, told Access. “I know Charles, I know he’s not actually a bad person. And I think it’s a matter of sometimes you tweet something a long time ago and they’re buried in there and they come out, and it sucks, and I do not agree with anything he said or support those statements, but I know that’s not who he is.”