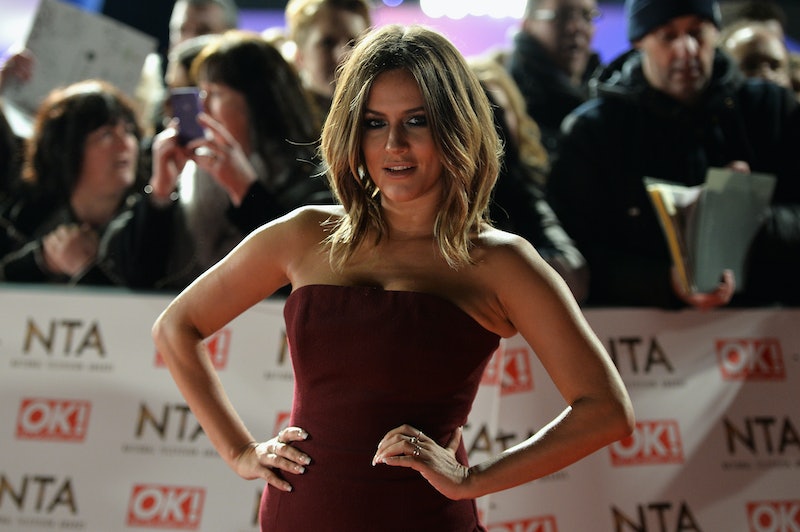 Awards season is in full swing, and while the ceremonies themselves are pretty thrilling, it's the after parties where the real fun and debauchery ensues. And, boy, did it ensue at the NTAs. There were reports of fights and of general drunkenness, but, most excitingly, of love... Presenter Caroline Flack and dancer AJ Pritchard were spotted together at the NTAs after party, the Evening Standard reports, which has sparked major romance rumours. But are the pair really dating?

In the photos acquired by the Mirror from the night in question, the chemistry between Flack and Strictly Come Dancing's Pritchard seems electric. The two can be seen laughing, smiling, and looking close, all while being deep in conversation. It caused speculation among some outlets that the pair are thus dating. Bustle has reached out to both Flack and Pritchard's representatives for comment, and we'll update you if we hear anything.

Over the years, Flack has been subject to unfair criticism about her dating life, with some trolls making comments about her dating younger men. Eye roll. She has previously dated One Direction's Harry Styles and responded to backlash she received about this relationship, Cosmopolitan reports, by saying:

"I feel like I shouldn’t have to worry about what I do. But it’s a social thing that people aren’t accepting of big age gaps. I know it’s human nature to gossip. But why say it’s bad? No one’s being hurt."

You tell 'em, Flack! Most recently, the presenter was engaged to Apprentice star Andrew Brady before calling off their relationship last year. Speaking to The Sun in December, Flack said: “I’m on my own now. So I’m sorting myself out, I’m doing what I want to do. I’m putting my head into this, into work and focusing on acting.”

Notably missing from Flack's wrist at the NTA red carpet was her "AB" tattoo, which she showed off for the first time at the Cosmopolitan Influencer Awards in April 2018, the Standard reported. But Tuesday's event was the first time she had been seen publicly without it. This fresh start is a major 2019 vibe. Flack recently posted on Insta a photo of her in a bikini with the caption "tattoo of regret" with a unicorn emoji, alluding to her unicorn tattoo. But fans joked that perhaps this wasn't her only "tattoo of regret."

AJ has also made news regarding his dating life. There was speculation for a good year or so that AJ was dating his former Strictly partner, singer Mollie King. The two never confirmed or denied the status of their relationship. He has also been romantically linked to his 2018 Strictly partner Lauren Steadman. Again: nothing has been confirmed on that front.

Flack and Pritchard were both spotted the morning after the NTA's smiling and generally looking gorgeous and happy as they went about their days, The Sun reported. Eek! Yay!

While it's very early days for Flack and AJ (if anything is in fact going on at all), I'm excited to see what happens.