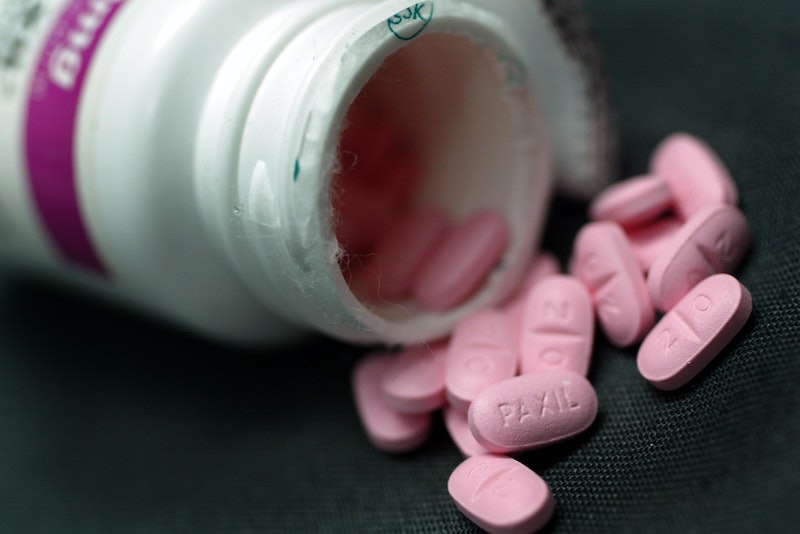 Half of Americans live with a chronic medical condition, and an estimated 11.6 percent of U.S. adults deal with chronic pain. To be diagnosed with chronic pain, a person must suffer recurring pain for three to six months. But that's only the beginning: Chronic diseases often involve long diagnostic periods, and some chronic pain sufferers are never truly diagnosed, leaving doctors stuck with treating their symptoms as a stopgap. Now, a new study has revealed another facet of chronic conditions: Some traditional antidepressants aren't effective for people with chronic illnesses.

Published Nov. 3 in the Journal of the American Medical Association, the O'Donnell Brain Institute study posited that "enough evidence now exists to prompt immediate change in how doctors approach depression cases in conjunction with chronic medical diseases," according to a press release.

The double-blind study, officially dubbed the Chronic Kidney Disease Antidepressant Sertraline Trial, involved 193 patients with both chronic kidney diseases and major depressive disorder. Researchers wanted to find out whether sertraline (most commonly prescribed as Zoloft) was effective in managing patients' depressive symptoms. Results were not encouraging, and they mirrored previous studies that looked at whether antidepressants were effective in patients with asthma and congestive heart failure: Those who took sertraline for 12 weeks did not significantly improve compared to patients who took a placebo for 12 weeks.

As reported by the study write-up in JAMA, "Evidence for placebo-controlled efficacy of commonly used antidepressants, such as selective serotonin reuptake inhibitors (SSRIs), is limited among patients with CKD, who generally have been excluded from large randomized trials of antidepressant medication treatment due to safety concerns."

This is why CAST's findings may be so vital in treatment of depression for folks with chronic illness. Researchers have for decades been studying how chronic diseases can cause depression in patients. A 2001 study looking at how depression could strike patients with HIV and AIDS reported that "[m]ost patients with serious, progressive illness confront a range of psychological challenges, including the prospect of real and anticipated losses, worsening quality of life, the fear of physical decline and death, and coping with uncertainty."

Feelings of hopelessness when the odds are stacked against you or when there seems to be no end in sight, as is the case with many chronic pain sufferers, can contribute to depression in patients. Of course, people are prescribed antidepressants in some cases, so the CAST trial's discovery could help doctors better treat people with chronic illnesses, when traditional antidepressants simply might not work.

Findings are especially important because not only may antidepressants not be effective in people living with chronic illness, but they may actually cause worse side effects, wrote the CAST researchers. Multiple participants assigned to receive sertraline in the study withdrew due to adverse effects, leading researchers to conclude that "treatment with sertraline [...] resulted in increased adverse effects compared with placebo."

While the CAST trial's findings may be disheartening, it's important to remember that sertraline is not all antidepressants, and that other medications have not been proven to be ineffective or detrimental. CAST researchers assert that "future studies need to explore whether non-SSRI medications or nonpharmacological therapies can result in improvement in depressive symptoms among patients."

Some nonpharmacological substance remedies for depression have been found effective, according to the Mayo Clinic, but several have significant side effects if improperly dosed, and many are not FDA-approved. Other treatments can involve no substances at all. If you're concerned about how the CAST study's findings may affect you, a few nonsubstance treatments for depression that have been found to positively affect people include exercising one hour per day, using light therapy boxes, getting acupuncture, and good old-fashioned talk therapy — but it's up to you and your health care provider to come up with a treatment plan that's right for you.