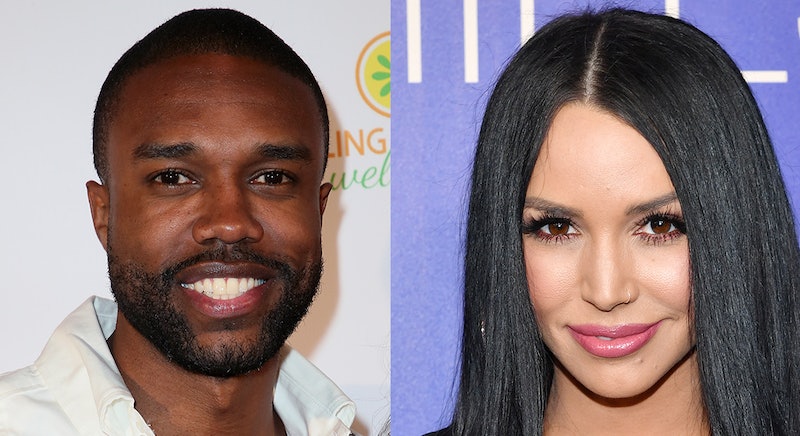 Last season on Vanderpump Rules, Scheana Shay went on a date with Bachelorette runner-up Robby Hayes. However, he's not the only person she knows from the Bachelor franchise. Scheana was spotted with DeMario Jackson and now fans want to know what that means. TMZ posted photos from their Sept. 10 outing at Disneyland in Anaheim, California. They didn't kiss in any of the photos, but DeMario did have his arms around her in most of the photos. And they went on rides, of course.

In contrast to the romance implied by TMZ, Scheana and DeMario's Instagram Stories make it clear that they were there in a group setting. Nevertheless, there seem to be some rumblings about something romantic between the two reality TV stars.

It's actually not even the first time that they went to Disney together. During the June 11 episode of Scheana's podcast Scheananigans with Scheana Shay, Scheana asked DeMario, "Do you remember when my sister and Justice shipped us at Disney Land?" DeMario confirmed that he did, but they never addressed why Scheana's sister "shipped" them that day.

The two of them have actually been friends for a long time. In that same podcast, DeMario shared, "I knew Scheana prior to this, before the show and before anything."

During that episode, they discussed cyberbullying and DeMario said, "I feel bad as like a brother of Scheana's, someone who loves her outside of this crazy world that we live in." So maybe they are just really good friends.

It's unclear, especially considering the tea that Scheana and DeMario spilled during an episode of her podcast the year before. The Bachelor in Paradise alum shared, "Fun fact, I've known Scheana forever. She was one of my crushes years ago." And by forever, he meant since 2007. Scheana revealed, "We used to work on background on a lot of the same shows and we have a mutual. best friend. It's just crazy. We go way back." One of those shows was Greek, on the network previously known as ABC Family.

Years later, DeMario came into SUR with one of his friends and ran into Scheana. She summed up the night by saying, "Then, we went out, we got drinks, then we made out." DeMario recalled, "Yep. That was a fun night. It really was."

Perhaps their friendship is more like being bros. DeMario told Scheana, "You are like the bro. A hot bro. Every single time we hang out, it's like yeah, you're drop-dead gorgeous, but like you're also the homie and friend." So maybe they just have a complicated, but seemingly drama-free, relationship.

At the conclusion of that podcast, Scheana declared, "We need to do another day." Then she upped the ante and asked, "Should we do another Disney day on edibles?"

In response, DeMario remarked, "Disneyland dates are always so much fun. It reminds me of being a kid again. But, now, you're high and drunk." Oh, and photographed by the paparazzi and the subject of reality TV romance rumors — and the hopes of a DeMario appearance on Vanderpump Rules, of course.