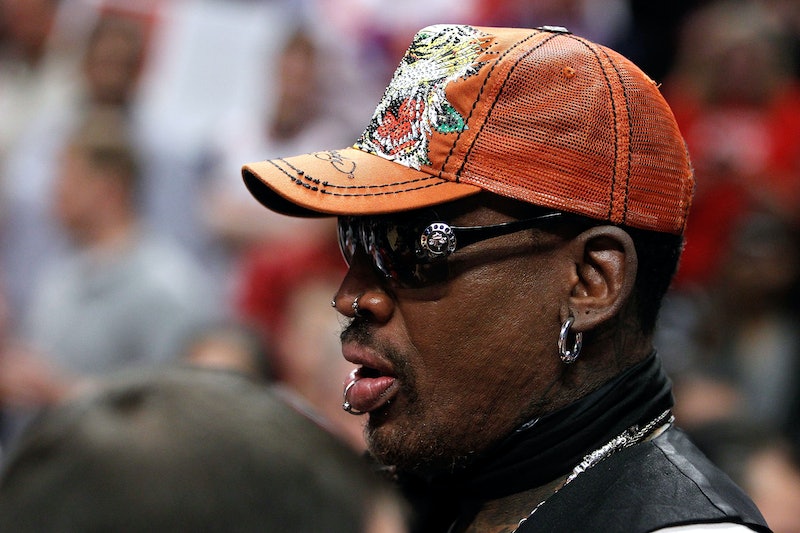 Dennis Rodman is reportedly on his way to North Korea for a visit, something which, while globally significant, is nothing new for the former NBA player. Indeed, his penchant for travel to the isolated nation has led many to wonder if Rodman and Kim Jong-Un are actually friends. In short, according to Rodman, the answer is yes — the basketball player and the authoritarian leader have developed a friendship through what Rodman calls "basketball diplomacy."

Rodman has visited North Korea at least four times in the past. The majority of these visits took place between 2013 and 2014 and centered around basketball. Kim is reportedly a big fan of the sport and, in 2013, Rodman arranged an exhibition game with the Harlem Globetrotters in North Korea, much to Kim's delight. Rodman returned the following year and organized a game between formerly professional American basketball players and North Korean players in order to celebrate Kim's 30th birthday.

During his visits, Rodman has reportedly spent a fair amount of one-on-one time with Kim and has been pictured in photos from previous trips sitting side-by-side with the leader. Indeed, at the 2013 exhibition basketball game, Rodman and Kim sat together in court side seats and reportedly talked and laughed together throughout much of the game. Rodman also publicly told Kim that he had "a friend for life" in front of hundreds of North Korean spectators.

Rodman has also characterized Kim as a friend when speaking with media outlets. Rodman has previously referred to Kim as his "friend, forever and ever and ever" and called him an "awesome kid." The Guardian also reported in 2013 that Rodman noted after one of his visits that he still considers Kim a friend, in spite of his actions.

Rodman has not spoken at length about the impetus behind his forthcoming visit to North Korea, or about any specific plans he may have with Kim. When asked why he was visiting the country now, particularly when U.S.-North Korea relations are significantly strained, Rodman stated that he's "just trying to open a door." While Rodman is not visiting North Korea in an official capacity, in terms of serving as a representative of the U.S. government, he nevertheless believes that President Trump will be pleased with his visit.

Well, I'm pretty sure he's pretty much happy with the fact that I'm over here trying to accomplish something that we both need.

Overall, the plan for Rodman's visit, as well as the reason why the former NBA player and authoritarian leader of North Korea have struck up a unique and, frankly, strange friendship, remains somewhat of a mystery. Rodman has certainly received a significant amount of criticism for his friendship with the leader of one of the world's most repressive states, but, as evidenced by his impending visit, it appears that Rodman remains committed to continuing to visit North Korea and Kim.