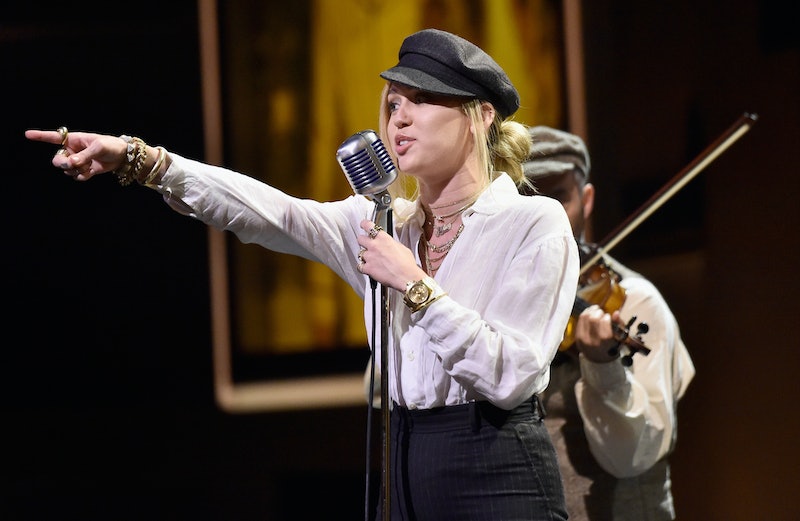 As Parton told CBS in 2012, she's known the "Nothing Breaks Like A Heart" singer since she was a baby. Parton and Billy Ray Cyrus met in the '90s, CBS explains, at the height of his song "Achy Breaky Heart"'s popularity. So Parton's connection with the family dates way back.

Fans who've followed Cyrus since the Hannah Montana days will likely remember that Parton made an appearance as Miley's godmother on the show. One of the Parton-starring episodes even included her singing the Hannah Montana song "Who Said?" which was a real treat.

And in addition to the Disney Channel show, Cyrus and Parton have made plenty of music together over the years. Parton is featured on Cyrus' song "Rainbowland," from Cyrus' 2017 album Younger Now. Cyrus has performed Parton's classic song "Jolene" a number of times, too, and they've even sung it together on occasion.

Parton and Cyrus are both slated to perform at this year's Grammys, so there's always a chance they could be singing together on stage, at least for a song or two. Cyrus seems to know her godmother's songs by heart, and fans would probably love to see the two of them side-by-side on stage.

Officially, Parton is set to perform her new music from the Netflix movie Dumplin', Entertainment Tonight noted, but there could still be room to add in a duet with Cyrus, too. Parton's new song, "Girl in the Movies," was featured on the Dumplin' soundtrack.

Over the course of her career, Parton has amassed a whopping eight Grammy wins and 47 Grammy nominations. Cyrus, meanwhile, has one Grammy nomination, for Best Pop Vocal Album for Bangerz. Still, Cyrus is one of the biggest pop stars in the country, even if she doesn't have a Grammy win yet. If the two women did take the stage together, they'd be an unstoppable force.

Parton and Cyrus have shared their mutual love and respect for each other in various interviews over the years, too. In 2017, Cyrus joked to Cosmopolitan that being able to raid Parton's closet was the best part of having her as a godmother. And in 2014, Parton defended Cyrus' decision to shed her Hannah Montana image.

"I'll never say anything bad about Miley, "cause I know she’s smart," Parton told the Associated Press at the time. "And I know she's talented. And I know she's had to go to drastic measures to try to make her point: 'Leave me alone. I am not Hannah Montana anymore. I want to grow up.'"

Cyrus may have changed a lot since the days when "Aunt Dolly" was on Hannah Montana. But it looks like she and her godmother have only grown closer over the years. Whether she's singing Jolene for The Tonight Show or posting throwback photos of the two of them together, Cyrus has honored Parton's legacy plenty of times over the years. And if they do perform together at the Feb. 10 awards show, their close bond is sure to be on full display.