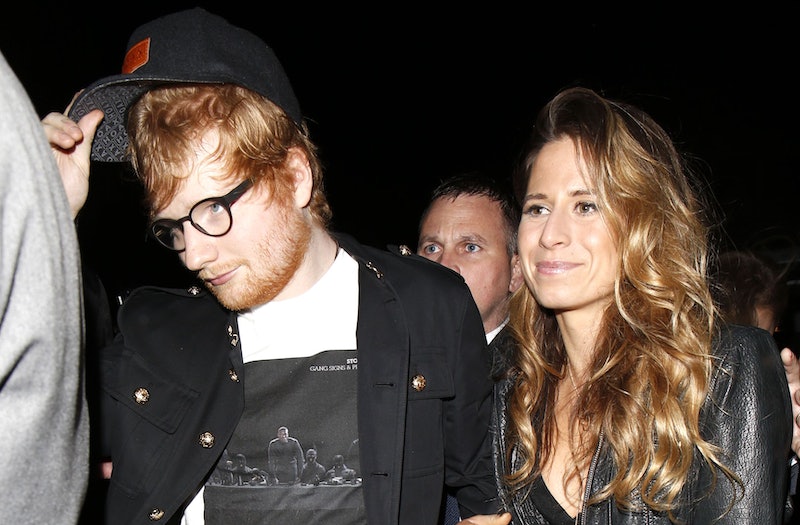 With Valentines Day approaching, it's only natural to start swooning over celebrity relationships, right? And, almost immediately, my mind wanders to a certain red-headed British icon who made his name singing and producing record-breaking (not to mention HEART-BREAKING) romantic ballads, and whether or not he's actually tied the knot yet. So, are Ed Sheeran and Cherry Seaborn married?

The singer is pretty private about his personal life, but over the years, he has given fans a few insights into his relationship with Seaborn, most notably last January when he announced his and Seaborn's engagement through an adorable snap on his Instagram. Along with the pic, Sheeran's caption read: "Got myself a fiancé just before new year. We are very happy and in love, and our cats are chuffed as well xx."

However, when asked during an interview with Access last August whether a date had been set, Sheeran stayed rather quiet on that front. After a few minutes of silence and shrugging, the singer said: "I never really do anything too public, anyway." While that's not confirmation that he and Seaborn did indeed tie the knot last August, it's not a denial either.

Fast forward to November 2018, and Sheeran addressed why he had yet to give a yes or no answer in regards to whether he's actually married or not. Speaking at Heart Live, Sheeran told presenter Sian Welby:

"It's not my life anymore it's hers, so I don't like speaking too much on it. When it's me I'm like 'Of course!' But now there's another human being in my life. If she wants to talk about it she can talk about it, but I want to respect her privacy."

High five to Sheeran on that one.

However, it looks like fans may have just got an update on this have-they-haven't-they situation thanks to Rudimental, a band that Sheeran has collaborated with on numerous occasions. Two of the bands members, Piers Aggett and Kesi Dryden, recently spoke about Sheeran's supposed wedding in an interview with The Daily Star, and inferred that it hadn't actually happened yet. "We did get an invite to the wedding and I'm looking forward to it," Aggett told the newspaper. "He had to invite us after we said we'll crash it, we will have a drink with him and celebrate his amazing day." Dryden added that they'll probably end up DJing, even though Sheeran hasn't asked them too. "I'm pretty sure it will be fun, Ed's got a lot of friends and he's a nice guy."

I have reached out to Sheeran's representative for further clarification on the situation, but have yet to receive a reply. I will update you if I hear anything.

So, while Rudimental's comments were pretty exciting to hear, let's not get ahead of ourselves, as Sheeran and Seaborn are still yet to confirm anything. That is, if they ever do confirm anything. And who says they have to? I mean, it's their wedding after all. And, in all honesty, if they never announced it, I'd still be as happy for them as I am now. It's a win-win.