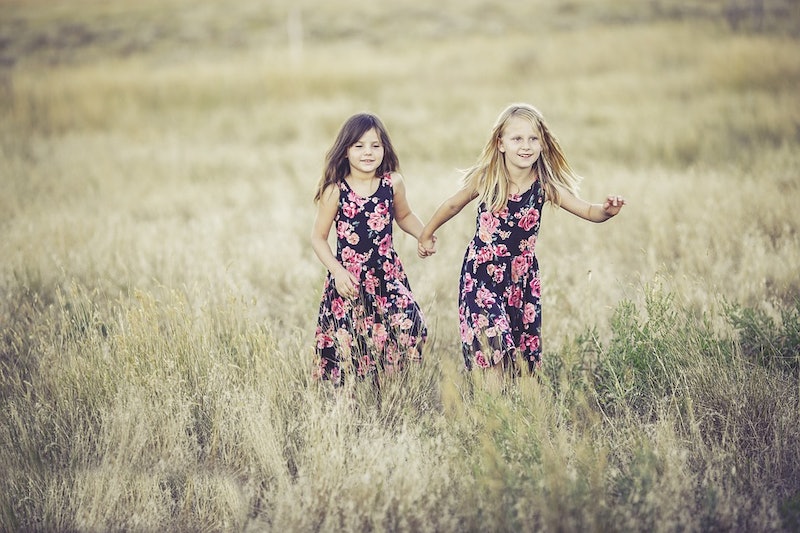 If you're an older sibling, you may already assume that first-born children are smarter than younger siblings (because, well, of course, right?). If you're a middle or younger child, meanwhile, you're probably shaking your head in disagreement. But new research our of the University of Edinburgh asks what many families have long pondered — and it turns out that the answer is more complicated than you might think.

According to the study, first-borns often do possess far better thinking skills, as well as score higher on IQ tests. Why? Because older children generally received more mental stimulation from their parents than their younger siblings. It makes perfect sense in some ways; of course first-borns would receive the benefit of more one-on-one time with their parents, because of course those parents are more available to stimulate their offsprings' minds when there is only one child about, as opposed to when the nest is full with two or more children.

But the implications of these results are much further-reaching than just that. Differences in how people fare in life according to birth order have been well documented by previous research; as such, the current study fleshes out the picture in some fascinating and useful ways.

The study was led by economists at the University of Edinburgh and the University of Sydney, who examined survey data collected by the U.S. Bureau of Labor Statistics and found that first-borns scored higher than siblings in IQ tests as early as age one. The data set included just under 5,000 children from pre-birth to 14 years old, checking in on the children every two years to examine their reading and picture vocabulary. They found that first-borns nearly always beat their younger siblings in IQ tests — and these differences were evident from as early as age one. Children born first were also equipped with superior thinking skills, too, despite the fact that the research proved that all children received the same amount of emotional support in the families.

The researchers believe these findings go some way in explaining what's known as the Birth Order Effect: A phenomenon in which first-born children end up earning more and receiving a better education later on in life. There's existing evidence both to support and refute the Birth Order Effect: In 2015, for example, research out of the University of Leipzig found that although birth order doesn't affect personality, there still seem to be slight differences in sibling intelligence, with the eldest often out-performing the others; however, a comprehensive study of 377,000 high schoolers conducted that same year by researchers from the University of Illinois suggested that birth order has no real effect on IQ or personality.

Meanwhile, Scientific American reported in 2010 on a "convincing" study from several years prior (2007, to be exact), which supports the idea of the order in which children are born directly correlating with their IQ: Norwegian epidemiologists published work showing the more older siblings one has, the lower one’s IQ.

But when it comes to how familial structures affect us later on in life, there's a persuasive amount of research to suggest the Birth Order Effect can play some part in how successful children turn out to be as adults. In a reversal of the "older siblings fare better" scenario, in 2015, economists from the University of Essex found that as children get older, the efforts of the eldest child can positively impact younger siblings at school. Called the "sibling spillover effect," the idea is that having a bigger brother or sister is equivalent to £670 ($838) of annual school spending on the younger sibling’s test scores — with the result being that younger children may outstrip their older siblings as they grow up.

But by the time they reach adulthood, there's evidence to suggest that elder children often end up flying higher than their other siblings. If you're first-born and female, for example, research shows your likely to be the most well-qualified child in your family. And a survey by USA TODAY found that of 155 CEOs, 59 percent were first born, 18 percent were the youngest and 23 percent fell in the middle.

It's also worth remembering, though, that when it comes to measuring intelligence, most of these studies into sibling success use IQ as the primary method of determining who is smarter. Although it's popularly believed to be the be-all, end-all measure of a person's intelligence, a huge investigation into the reliability of the IQ test recently found that they are fundamentally flawed, failing to take into account the complexities of human intellect and cognitive ability. As such, you might want to take all of the above studies with a grain of salt.

The research is certainly not conclusive on this, and so it's difficult to say for certain whether or not first-borns are more likely to be successful later on in life; ultimately, it's all very unique to each family. Whatever your sibling status though, keep doing you and you're sure to be fine.