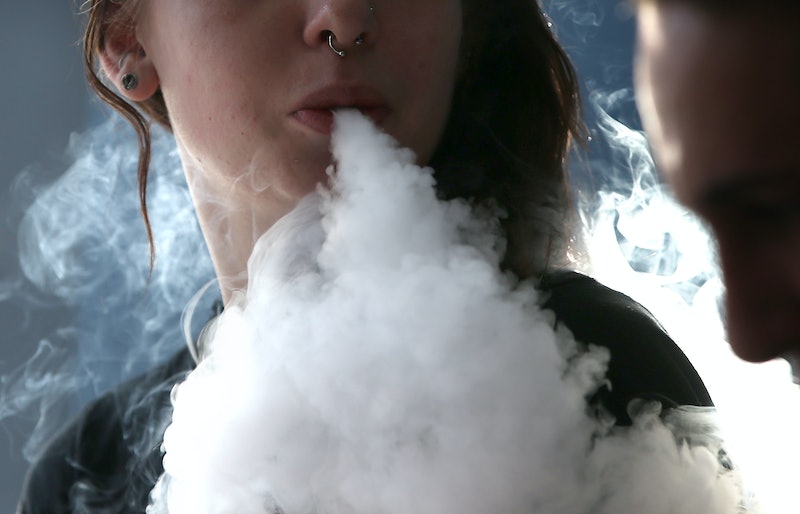 Vaping has become all the craze over the last five years, but scientists still don’t know much about the long term health side effects of the common practice. E-cigarettes are generally considered healthier for you than smoked tobacco products, but that doesn’t mean vaping gets a passing grade when it comes to health and wellness: The CDC reported these products still can contain harmful chemicals like nicotine, heavy metals, unstable organic compounds, and fine, inhalable particles that can cause health issues. Some people believe e-cigarettes that do not contain addictive nicotine are healthier, but a new study suggests flavored vapes can be “toxic,” and might be just as bad for your health as regular cigarettes.

On Jan. 30, a study published in the journal Frontiers in Physiology revealed that flavors used in e-cigarettes — even in nicotine-free products — have a detrimental effect on your health. The researchers from the University of Rochester Medical Center found that when flavoring liquids are heated and inhaled, lung cells experience increased levels of oxidative stress response compared to non-smokers. That means, these cells undergo inflammation, tissue damage, and even cell death. Flavored vapes (aka, e-liquids) were found to be especially damaging to immune cells — specifically, a white blood cells called monocytes. These cells are essential to maintaining a healthy immune system, protecting against bacterial infections, viruses, and fungal infections. Despite the fact that some of these e-liquids are considered safe if ingested, inhaling them can have serious health consequences for vapers.

Additionally, the research showed not all vape flavors pose the same risk of lung and cell damage, and combining flavors may be even more dangerous. “Cinnamon, vanilla and butter flavoring chemicals were the most toxic but our research showed that mixing flavors of e-liquids caused by far the most toxicity to white blood cells," explained Dr. Thivanka Muthumalage, the study’s first author, in a press release.

A 2015 Reuters poll revealed around 15 percent of U.S. adults use e-cigarettes. Moreover, there are over 500 brands of e-cigarettes and 7,700 flavors currently available for purchase in the United States alone — making the study’s findings even more worrisome. While many people use vaping as stepping stone to quit smoking, e-cigs are also popular among teenagers and high school students. Dr. Irfan Rahman, the senior author of the study, explained in the press release that e-cigs with “alluring flavor names, such as candy, cake, cinnamon roll and mystery mix, attract young vapers.” He concluded, "Our scientific findings show that e-liquid flavors can, and should, be regulated and that e-juice bottles must have a descriptive listing of all ingredients. We urge regulatory agencies to act to protect public health."

Though a study published in the National Academies of Sciences, Engineering, and Medicine on Jan. 23 suggests e-cigarettes and vaping are less harmful to your health than traditional cigarettes — based on available studies, which are limited — this doesn’t mean they are risk-free. New research published in the journal Proceedings of the National Academy of Sciences found that those who vape have a higher risk of developing lung and bladder cancer, as well as heart disease, compared to nonsmoker peers. So, while vaping may be a better option than cigarettes, this doesn’t mean they are necessarily a good or healthy option unto themselves.

Scientists are beginning to better understand the health risks associated with vaping, and it seems like every study done proves the practice may not be as healthy as previously believed. Even without the added addition of the addictive chemical nicotine, the study conducted at the University of Rochester proves flavors alone could hurt your lungs and white blood cells.