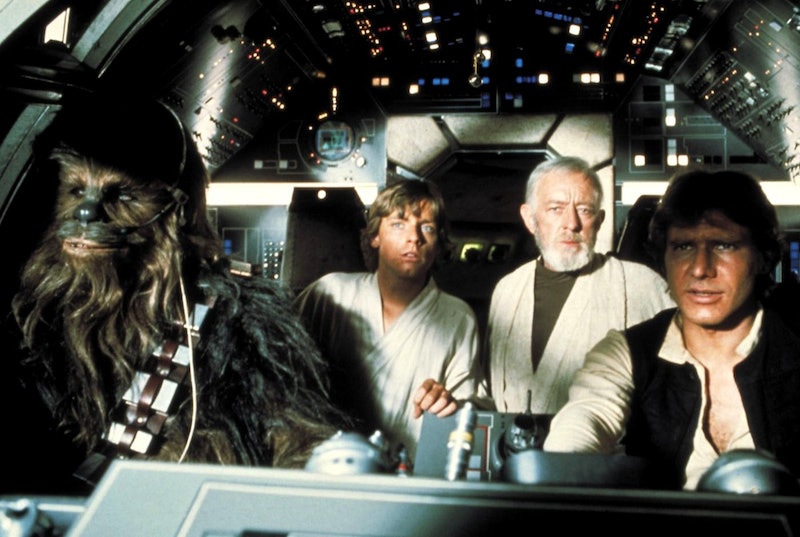 Spoilers ahead for Star Wars: The Last Jedi. Fans of the Star Wars universe may have been prepared for Han Solo's death in The Force Awakens. After all, there'd been rumors that Harrison Ford wouldn't be returning for the next films, and he'd griped about playing his character for years. That still didn't cushion the emotional blow of seeing Han killed, though. If you're still grieving, take comfort in knowing that while Solo may not be in the latest Star Wars release, The Last Jedi, he appears in spirit. When small gold dice are found on his ship, the Millennium Falcon, they're brought and given to his former paramour, Princess Leia Organa. It's very touching, but are Han Solo's gold dice from the original trilogy? Did they have a larger significance casual fans are unaware of?

Before we can go into what they mean, we need a little history lesson. Let's say you're an original-trilogy Star Wars super fan with a keen eye for detail. You kept the VHS restored edition just to see the Stormtrooper getting bonked by a door in the background while capturing R2 and C-3P0. You know not only about the tennis shoe, but the gum and yogurt container used as ships by the FX department in the background of The Battle Of Endor. So you also probably caught the small gold dice dangling from the Millenium Falcon's cockpit in one scene of A New Hope, never to appear again. Maybe you wondered if it was a continuity error, or some kind of in-joke from the film crew.

But if you, like the majority of the population, have no idea what we're talking about, just know that there is indeed a pair of small gold dice dangling during a lone cockpit fight scene of A New Hope. You could easily miss them — even with the new HD restoration, they're pretty hard to spot amid all the buttons and lights, and again, only appeared in one scene.

Fan theory has it the dice were put there by George Lucas as a nod to the film he and Harrison Ford had previously film worked on together, American Graffiti, an homage to '50s youth and car culture. Others think it was a general nod to the big, fuzzy novelty dice so many people have hanging on their rearview mirrors. Either way, someone supposedly nabbed the prop, and we didn't hear about them for the next 38 years. That is, until they made front cover news.

In their June 2017 issue, Vanity Fair featured a special photo shoot of the Star Wars prequels' new cast members. Right there between the V and the A were, yep, dangling gold dice. This could just be an easter egg for hardcore fans, something only the select would notice. But now, with the release of The Last Jedi, it's clear these dice hold special meaning. Even after their tumultuous relationship ended Leia still loved Han, and this small token from his beloved ship is as close to physically representing Han as you can get.

This didn't escape the notice of the new trilogy's writers and directors. The Millennium Falcon is as much a part of Han Solo's persona as his sarcasm, but the dice, and their place in the Star Wars universe, have puzzled fans for decades. Fan theories abounded, but there was nothing official until Lucasfilm Story Group creative executive Pablo Hidalgo gave an exclusive interview to Vanity Fair. In the interview, Hidalgo, who according to director J.J. Abrams is the "keeper of all arcane details" when it comes to Star Wars, revealed what's likely the closest to official canon we'll have for now.

Hidalgo says the dice were used by Han in a high-stakes game of Corellian Spike, played against Lando Calrissian. In a lucky roll, Han won Lando's ship — the Millennium Falcon. As a token of his good fortune, Han hung the dice in the very ship they'd won. This fits in with the original trilogy as well - when Han and company visit Cloud City in Empire Strikes Back, Han tells Lando they stopped in for repairs on Han's ship. Lando protests, and Han responds, "Hey now, you lost her to me fair and square." Now we know exactly how.

As to whether we'll get to see the infamous game in the upcoming Han Solo prequel, Hidalgo's playing coy, telling Vanity Fair to "ask me a movie from now." With fans clamoring for every detail of the Star Wars universe, no matter how small, we sure will.

More like this
A New Scooby-Doo Movie Confirmed Velma Is Gay & Twitter Is Pumped
By Radhika Menon
Twitter Is Unravelling Over Wolverine’s Return For 'Deadpool 3'
By Darshita Goyal
Everything You Need To Know About ‘Black Panther: Wakanda Forever’
By Bustle Editors
Alan Rickman's Diary Reveals Why He Considered Leaving 'Harry Potter'
By Darshita Goyal
Get Even More From Bustle — Sign Up For The Newsletter