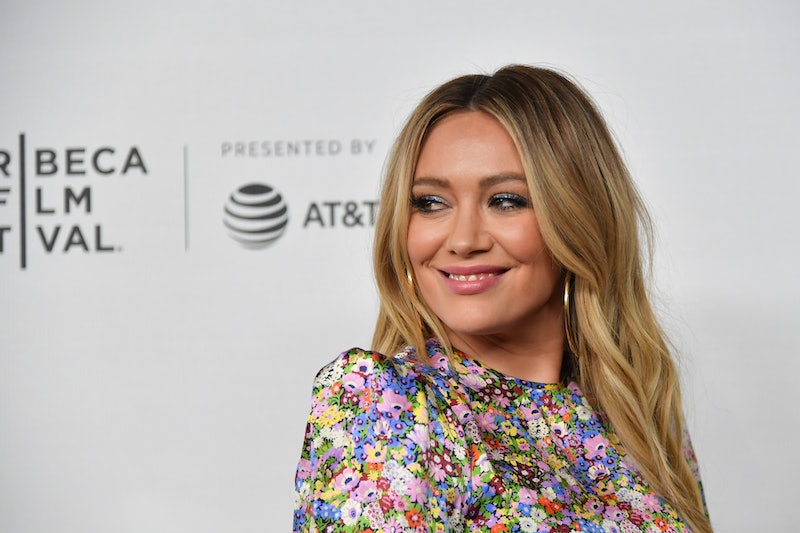 Despite their fame, even the biggest celebrities still get excited about achieving a new hair ‘do. Delivering a dream look that you’ve wanted is an accomplishment when done correctly, hence why Hilary Duff just got new bangs that are giving fans serious ‘70s vibes.

Stepping out in a fresh new hair style, Duff posted a photo of herself on May 30 in a new set of long wavy locks with a throwback set of ‘70s-inspired bangs across her face.

“Well @nikkilee901 came thru with these fly 70s summer bangers” the actor and singer wrote in the caption. “Mama feeling good.”

The hairstylist responsible for Duff’s wavy blond locks is Nikkie Lee, who also posted a collage of the Younger star to Instagram in her summer look and explained she helped prepped Duff for a press day.

Bustle spoke with Lee about how Duff had been window shopping bangs for while and Lee swooped in with a cute and playful hairstyle.

“Hilary’s been toying around with the idea of bangs for a few weeks,” Lee told Bustle. “I just ignored her hoping she would forget about them! But we just went for it, and we’re so glad we did! Instead of doing a full on bang we opted for more of a curtain bang that sweeps to both sides. The vibe is very '70s and a perfect way to switch up her look!"

The actor was even so bold as to film Lee in the process of cutting her hair and posted it on her Instagram Stories.

Duff has sought out the help of Lee in the past when it came to hair changes no matter how charmingly simple or drastic. Plus, Duff has often filmed Lee while performing her artistry on the Younger actor.

In November of 2018, Lee had done up Duff's hair in a completely different color and style than her fans are used to. The singer and actor had dyed her hair a striking platinum blond color, and even posted the entire process on her Instagram Stories.

"This feels like hot flames on my head," Duff explained in her Stories. "Whoever bleaches their hair all the time knows what I’m talking about. This is horrible. The hot flames are out of this world!"

Despite Duff's complaints when she bleached her hair for an icier, Khaleesi-approved hair color, she's consistent with making bold hair changes. When Duff made her comeback to music in 2015, she had sported a mid length pink ombre hair color. And shortly after, the star donned bluish green wavy locks.

Hilary Duff's hair journey is a long one, but it's the very reason why fans look to her for style inspiration. Duff may have decided to shoot for nearly all the colors of the rainbow in her style choices, but her new beach-worthy '70s bangs are a fit for the sun kissed days that lie ahead.