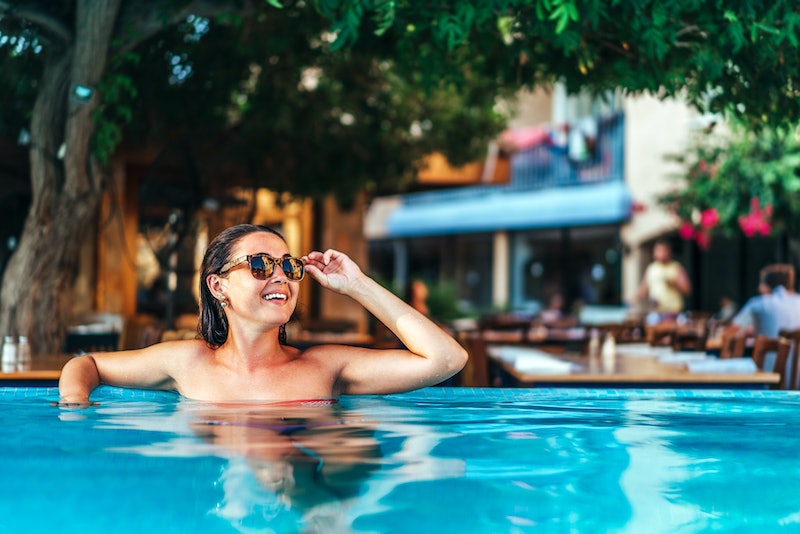 With summer on the way, you're probably looking forward to setting up your out of office and relaxing by the pool. But the CDC delivered a little bit of bad news this morning for those of us who wanted to do just that: turns out that poop germs in treated pool water can still make you sick, according to a report from the CDC. This is why it's important to heed those warnings about not swimming if you have active diarrhea, because that's one of the biggest culprits for spreading gastrointestinal illness.

While all public pools can pose a risk, the CDC noted that hotel pools, spas, and hot tubs were the main offenders with 32 percent of cases resulting from contaminated water in pools at hotels, motels, inns, and travel lodges. And, the scary part is that you can still get sick even if the water is treated because some pathogens are resistant to chlorine. In 46 U.S. states and Puerto Rico, the CDC found 493 outbreaks that resulted in 27,219 cases of illness and eight deaths over a 14-year period.

Lack of proper water-treatment chemicals coupled with warm water can increase the risk of both legionella and pseudomonas, and people with compromised immune systems or active respiratory infections are at a higher risk for contracting legionella, the CDC noted. And, while all fecal matter can make you sick, diarrhea poses a higher risk than regular poop.

"With most diarrheal illnesses, the number of germs found in each bowel movement decreases as the diarrhea stops and the person’s bowel movements return to normal," the CDC explained in its healthy-swimming section. "Therefore, a formed fecal incident is probably less of a risk than a diarrheal incident that you might not see."

One of the most effective ways to avoid becoming infected with water-borne pathogens, is to avoid swallowing pool water. "The germs that cause recreational water illnesses can be spread when swallowing water that has been contaminated with fecal matter (poop). How? If someone has diarrhea, that person can easily contaminate an entire aquatic venue," the CDC noted. "The water is shared by all swimmers. It’s communal bathing water. It’s not sterile. It’s not drinking water." And, while treating infected water can kill the poop germs, it can take several days before the water is safe to swim in. "This means even the best maintained aquatic venues can spread germs."

For hot tubs infected with legionella, the sanitation process is much more rigorous than just treating the water. Infected hot tubs must be drained, thoroughly disinfected, fitted with new filters, refilled and hyperchlorinated for 10 hours before flushing the entire system, retested for the pathogen, and reported to a state or local public-health agency, according to the CDC. One of the scariest things about legionella is that it can also be spread through water droplets in the air.

"In man-made settings [like pools and hot tubs], legionella can grow if water is not properly maintained. These manmade water sources become a health problem when small droplets of water that contain the bacteria get into the air and people breathe them in," the CDC reported in a legionella fact sheet. "In rare cases, someone breathes in legionella while they are drinking water and it 'goes down the wrong pipe' into the lungs."

If you develop symptoms such as cough, shortness of breath, muscle aches, headaches, or fever, it's important to tell your doctor if you recently used a hot tub, went on a cruise, or stayed a hotel with air conditioning, which can also spread the pathogen. With summer so close, it's tempting to pretend you didn't read this story because ignorance is bliss. However, swimming with fecal matter is not only gross, it can also make you really sick. While you don't have to shun all public pools, use your best judgement before taking a dip. You can also buy pool test strips on Amazon for less than $10 for extra piece of mind. Because, #TheMoreYouKnow, the less chance you have of swimming in poop germs.