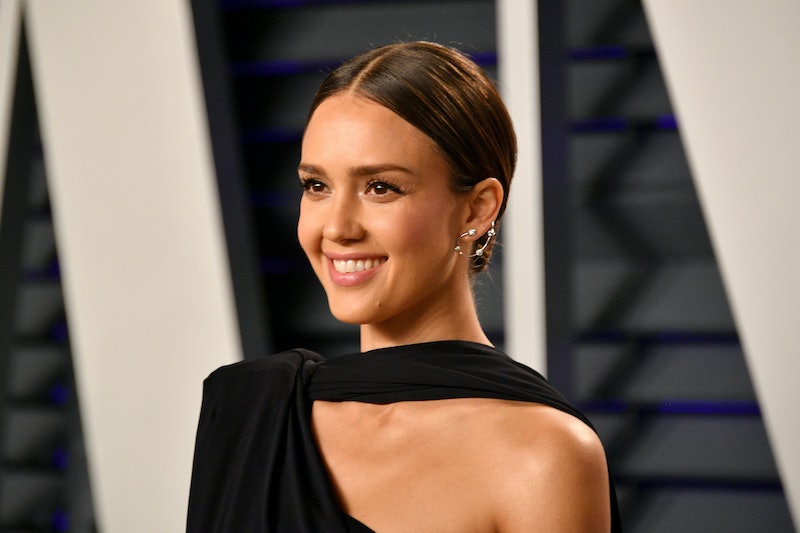 Now that's a proud mom. Actor and The Honest Company founder Jessica Alba just got three new zodiac tattoos on her arm in honor of her kids. Alba shared a shot of her latest ink on her personal Instagram while posing with tattoo artist Dr. Woo. The tattoos are an astrological constellation representing to her children's signs, which Alba revealed in the caption of the post. The mother of three permanently displayed her love for her kids via her new inkings and it really was the sweetest gesture.

In the caption, Alba listed off each of her children, their individual zodiac signs, and the accompanying emoji symbols. Her eldest daughter Honor is a Gemini, born in June 2008. Her second daughter Haven is a Leo who was born in August 2011. Her youngest child, son Hayes, is a Capricorn who arrived in December 2017.

The tattoos are placed in three spots on Alba's inner forearm. One tattoo falls just under the crook of her elbow, while another is positioned on the outer edge of her arm in between her elbow and wrist. The third is etched above the inner side of her wrist.

This photo of Alba and Dr. Woo posing at his studio at Hollywood Roosevelt Hotel's Hideaway at Suite X isn't a close up. Therefore, you can't really see or truly appreciate the detail in the tattoo — at first.

However, there is a second photo in Alba's Instagram slideshow and it shows off all of the lines and the dimensions of the design. It's certainly a cool conversation starter since it looks a tad cryptic if you don't know what it is.

The tattoos were such a lovely way for Alba to express herself. Her fans were all about this ink and responded to it in the comments of the post. One exclaimed "Nice and original tattoos!!!," while another had an interesting theory, stating, "That's a good start... now more to come?"

The lifestyle guru also appears to be inspiring her followers with this tattoo, with one noting, "I have been wanting to do this with my kids signs but didn't kno [sic] where or what placement made sense! I love this."

Alba does have other ink. The piece that is most visible is a small black tattoo that lives on her inner wrist. It's a lotus in Sanskrit, which Alba referred to as her "my first breakup tattoo" during an interview with late night host Stephen Colbert. She shared that she got the ink after splitting with an actor that she declined to name. "He was really anti-tattoos, and I felt like after I broke up with him, I, like, found myself again," she explained.

When Alba gets tattooed, she puts a lot of thought into it and selects designs that have a not-so-obvious personal meaning. The tattoo celebrating her children is further proof of that.

More like this
Meet Foreverist, The Skin Care Brand That Keeps Tattoos Looking Fresh
By Audrey Noble
This K-Beauty “Wrinkle Bounce” Stick Is Going Viral On TikTok
By Destiny Knight
Kendall Jenner's Cowboy Boot Tattoo Is The Cutest Micro-Ink
By Sophia Moore
Selena Gomez's “Buttercup Yellow” Nails Are The Sweetest Summer Mani
By Audrey Noble
Get Even More From Bustle — Sign Up For The Newsletter