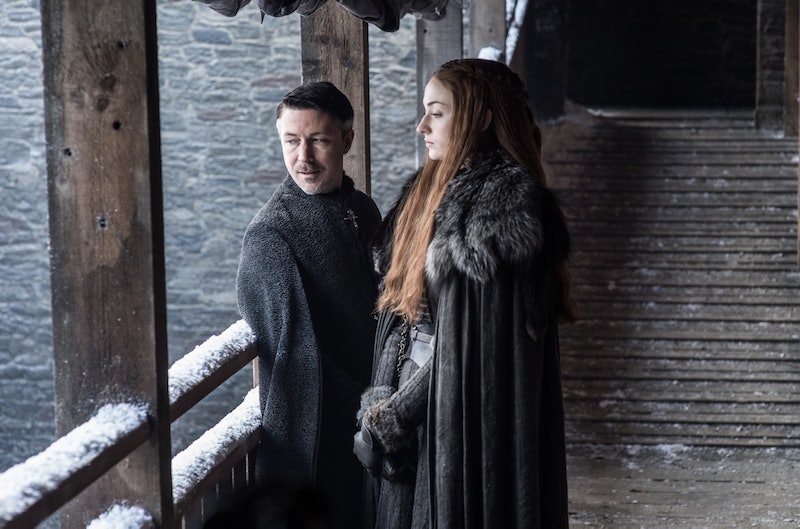 My favorite fantasy show about a throne made out of swords won't return for a few months, but at least there are some new (and intriguing!) stills to hold me over. On Thursday, HBO released a whole pile of photos from Game of Thrones Season 7, and yes, I have some questions. I think it's best if I tackle said questions one at a time, so here is my first: What are Sansa and Littlefinger up to? What could they possibly be discussing? Could it be the snow? Or could it be Snow?

When we last saw the Lady of Winterfell and Peter Baelish, the latter was all bent out of shape over Jon Snow being named the King in the North. Shortly before, Littlefinger told Sansa he wanted to marry her and take the Iron Throne, but Snow's recent promotion may be a wrench in his plan... or is it? Oh, Winterfell politics.

In a June 2016 interview with Variety, actor Sophie Turner talked about that Season 6 scene and what it might mean for Sansa, Littlefinger, Jon Snow, and Winterfell. She said,

"[Sansa's] not getting the credit she feels she deserves, that Littlefinger would grant her with. He obviously wants her on the Iron Throne and him by her side — she doesn’t want that, but she wants recognition for the effort that she put in, in order to claim back Winterfell, because if it wasn’t for her, it wouldn’t have happened. So I think she’s seeing Littlefinger as a bit more trustworthy and more of an ally than she initially thought."

Now, take a look at that Season 7 photo of Sansa and Baelish looking out over the snow-covered land. What could those two possibly be doing? Are Sansa and Littlefinger all in this together? Is Littlefinger persuading Sansa to help take down her brother? Has Sansa turned against Jon? Or is Sansa laying the groundwork for Littlefinger's destruction? Or are they just having a casual chat about the weather? (Snow again? *Sigh.*)

You're right, Cersei. They're probably simply talkin' about the wind chill, nothing more.

More like this
'Doctor Who's New Companion Has Been Winning Acting Awards Since She Was 18
By Shahed Ezaydi
'Bridgerton' S3 Teases Exciting Social Season For Penelope Featherington
By Bustle
Theo James Revealed The Truth About His 'White Lotus' Nude Scene & Fans Can't Cope
By Stephanie Topacio Long
The 'Kenan & Kel' Reunion On 'SNL' Took A Dramatic Turn, Thanks To Keke Palmer
By Brad Witter
Get Even More From Bustle — Sign Up For The Newsletter