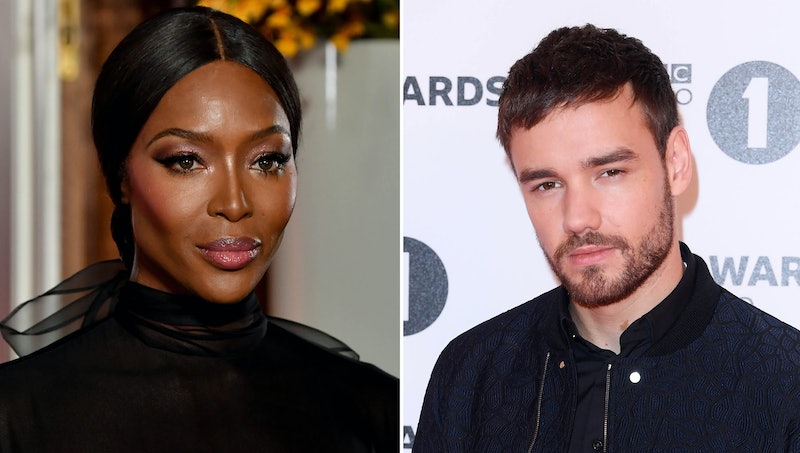 Cuffing season is in full swing. Yes, gird your loins and get out on the toon because love is waiting and there is only a fortnight until Valentine's Day. And, in another edition of "OMG celebs are just like us," cuffing season appears to be hitting actual real-life mega celebs. Yes, y'all, and you don't get much bigger than this potential match: Naomi Campbell and Liam Payne are reportedly dating.

Now, I wouldn't necessarily go out and buy a hat just yet because, for one, you're probably not invited, and two, they were just seen out and about together — nothing too major. It was during a Davido Adeleke gig at the O2 arena (which, y'all, is some music to flipping dance to), that the pair were seen hanging out, the Evening Standard reports.

Previous to this outing, the international supermodel and the "Strip That Down" singer were flirting up a flipping storm on their social media. Guys, seriously. Campbell posted a picture of herself on her Instagram with her lit AF new haircut and Payne commented with some flirty words that are not low-key. No, y'all, these are high-key flirting words.

"Perfection in a person... Don't give me those eyes," Payne wrote in the comments sections. What a time to be alive.

And, y'all, this flirting was not a one-way street. Oh no, Campbell has been flirting right back, and I am not even kidding. After Payne posted a sultry mirror selfie of himself (as you do), she commented "Beautiful soul." And how did he flipping respond?! "Takes one to know one". And he added a flipping kissy emoji alongside what are clearly some flirty AF words. So, like, let's be real, it's not that far fetched to imagine them sliding into each others DMs, am I right? Jesus H Christ this is all so exciting. I just can't. Bustle contacted both of their representatives for comment, and I will be sure to update you if I hear anything.

And, guys, if this is happening, how lucky is Payne? Campbell is one of the greatest supermodels of all time, and an actual living icon. She has been on top of the game for, like, over 30 years, and she has helped pave the way for POC in fashion. She was the first black woman to feature on the cover of French Vogue in 1988, as Dazed reports, and has been the muse of countless fashion icons including Valentino, Versace, and Alexander McQueen.

And, while Payne may not be a fashion icon, he is no shrinking violet. Oh hell no. Over the past year, his career appears to have gone from strength to strength. Do you remember a little band called One Direction? Yes, Payne's early days in the music industry were defined by a kind of 21st-century Beatlemania, with screaming fans and sell out gigs, hit after hit, and a foundation for a career that is stronger than steel-clad concrete. Since the band announced their hiatus, he has had a successful solo career with tracks like the addictive AF "Polaroid" and the saucy AF "Strip That Down."

Whether the pair are dating, or just becoming good pals, I would actually love to be a fly on the wall during their chats. Fashion this, music that, do you know this person? I am about to faint just thinking about it.