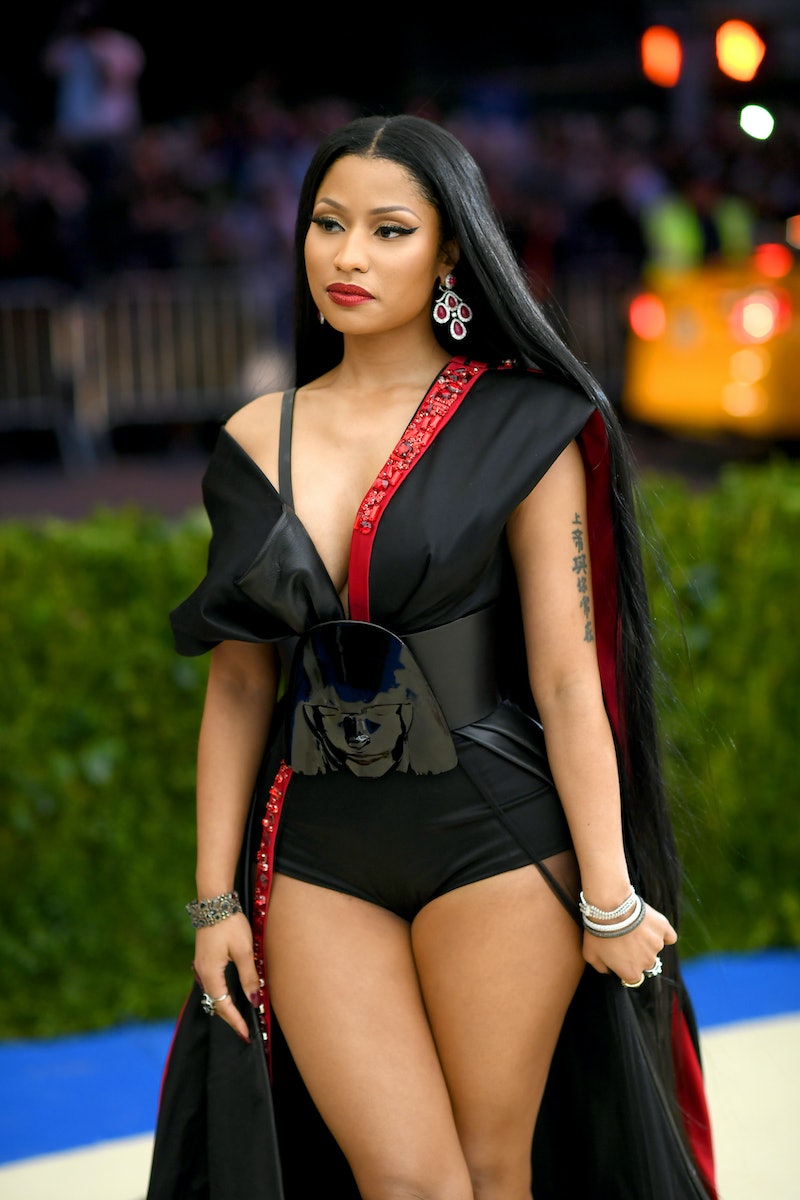 It's been two and a half years since Nicki Minaj's Pinkprint dropped, and the world needs another full studio album. There are no signs yet that the rapper has a release in the works, but on Tuesday photos emerged of the star out and about with hip-hop legend Nas. While fans can only hope some sort of epic collab is in the works, followers on social media only want to know if Nicki Minaj and Nas are dating. Of course, any celeb relationship is only hypothetical until the couple goes public, but let's take a look at the evidence on Instagram and Twitter so far.

(Bustle has reached out to a rep for Nas for comment; a rep for Nicki could not be reached at the time of publication.)

Fans caught wind of the potential romance when Nicki posted a pic of herself getting comfortable with her fellow rapper to Instagram. The snap shows the two at a restaurant, and from the way they're cozying up to each other, it's not surprising that some fans might think it was more than a work dinner. However, she did caption the picture with a message of congrats for Nas, which means the two seem to have been having a simple celebratory night out. Plus, they weren't alone. This hasn't stopped some fans from seeking out further evidence of the relationship, and many seem determined to name the two the next rap power couple.

Another Instagram of the evening emerged along with theories about everything from their matching chains and to their songwriting compatibility.

Nicki posted the first pic of the two on Tuesday, captioning it "Only KINGS recognize QUEENS. @sweetchicklife has the best food 👅 congrats @nas 😜" The first half of the note could point to a relationship, implying that only someone like Nas is worthy of her talent and attention. But it could also be wordplay — Nas was born in Brooklyn (aka Kings County), but grew up in Queens, New York, while Nicki is also known for being from Queens. Also, the second part of the caption sounds more like the point is congratulating Nas.

This is further complicated by another post of their evening that fans found, in which DJ Statik Selektah also offers congratulation to the rapper.

The post is captioned "Dinner with Nas & Nicki & our Emmy. 🏦 congrats @sweetgrassp", which lets us know what the group was celebrating. Sweetgrass is a film production company that won a Sports Emmy for Outstanding Camera Work. The Sports Emmys were on Tuesday, May 9, so it's clear Nicki and Nas were out to celebrate the win. However, the connection between the Sweetgrass company and Nas is still unclear.

These details didn't stop the fanbase from freaking out about the rumored relationship on Twitter, though. Using the #NasNika hashtag, fans found more signs or shared their thoughts on the potential couple.

A fan dug up some Instagram likes from Nas, noting that he recently liked one of Nicki's photos. The same account noted that the two appear to be wearing matching chains.

Other fans tweeted out their love for the two as a couple:

A lot of fans pointed out that the two have a romantic musical past. In 2012, Nas was featured in the music video for Nicki's "Right By My Side". In the vid, which is from early in Nicki's career, the two go on a series of dates. At the end of the video, they share a pretty steamy kiss, and many fans just want this fiction to become a reality.

Nicki took note of one of the #NasNika tweets, but didn't exactly confirm or deny anything. When a fan tweeted the trending hashtag at the star, she laughed off the implication.

Fans also called upon the star to spill about Nas before her performance at the Billboard Music Awards. The event, which takes place on May 21 in Las Vegas, will feature a much-hyped appearance by Nicki.

Whether it's a collaboration, in the studio or onstage, between Nas and Nicki, or they truly starting to date, fans are in full support of this duo. Only time will tell the real reason these rappers have been hanging out.