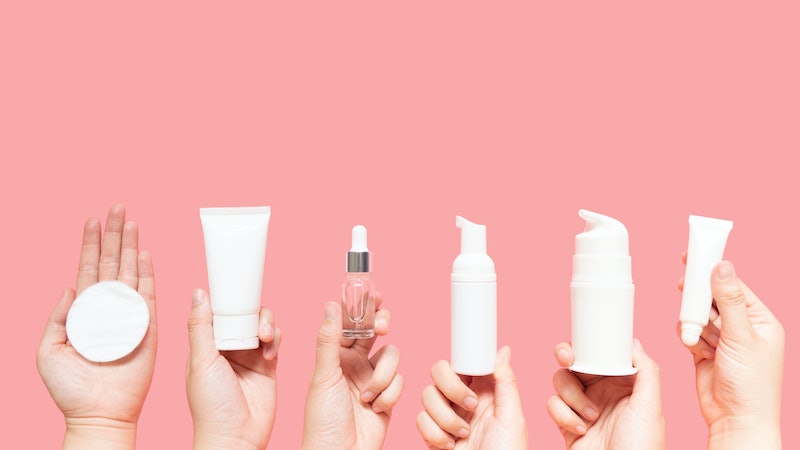 The natural beauty industry is booming. According to market research company The NPD Group, in 2018, U.S. skincare sales reached $5.6 billion, and natural brands accounted for $1.6 billion of that; a 23% increase from 2017. In recent years, brands and products with tag lines such as "non toxic," "made from all-natural ingredients," and "preservative-free" have become the norm. But where does this leave synthetic ingredients? Should we be ditching one for the other in the pursuit for the clearest, healthiest skin possible, or do both have their place in our beauty routine?

It’s a widely held belief that natural ingredients are somehow better than synthetic ones, and much of this narrative has come from the food industry, where the rise of veganism and pesticide-free farming has led us to be more conscious about our food choices. And now the same attitude is being applied to our beauty routines.

But as Sam Farmer, cosmetic scientist and founder of Sam Farmer Skincare explains, there is no legal definition of the word ‘natural.’ “Natural labels are also driven by their own ethos and standards, usually not based on scientific evidence,” he says.

Defining once and for all what "natural" means is something that Soil Association Certification (SAC), a founding partner of COMOS, is working towards. Georgia Barnes, the senior beauty and wellbeing business development manager for SAC, tells me that they are campaigning for greater clarity on labels and to eliminate "greenwashing."

However, Farmer has his doubts, saying, "there are some organisations that have attempted to define the word 'natural,' like COSMOS. But these are private, commercially driven companies trying to be the certification body for 'natural' so they can make the most money."

However, according to Barnes, SAC "is a wholly-owned subsidiary of the Soil Association charity." She continues: "It is run as a not for profit company that, as well as helping to deliver parts of the charity’s strategy, also generates financial returns that are ploughed back into the charity’s wider work."

I have reached out directly to representatives at COSMOS to ask for comment on Farmer's claims, but have not yet heard a response from them.

Over the year, many well-performing synthetic ingredients have been demonised due to the wealth of information that's at our fingertips. Information that can often be quite misleading.

As Pamela Marshall, clinical aesthetician and founder of Mortar & Milk explains, while the vast majority of people get their information in regards to beauty ingredients from magazines, Instagram, YouTube, and Podcasts, the information itself is coming from brands. "What we are inundated with is brand speak, not actual real scientific fact," she says. "It's what they want to parlay and very often not actual fact. That information then gets regurgitated over and over again." It's very frustrating, she tells me.

Marshall reveals that she and her team of experts spend an enormous amount of time re-educating clients in her clinic on the science of skin functionality and how ingredients work within the skin. "As consumers, we are constantly buying new products. We read an article or watch a video and think 'awesome, I'm going to get that,' and then it doesn't work, so we move onto the next recommendation." Marshall continues: "There's a lot of money made off the back of vulnerable consumers."

One ingredients that’s been widely shunned by the cosmetic industry is mineral oil. As a by-product of petroleum, it has existed since the manufacturing of petroleum began but has been widely criticised by the beauty community for its comedogenic qualities. However, mineral oil is a highly effective ingredient in emollients for eczema sufferers, as it reduces water loss from the skin.

Preservatives such as parabens and formaldehyde-releasers have also been on the receiving end of scathing criticism for decades. Their development in the 1940s was groundbreaking for the cosmetic industry, given their ability to prolong the shelf-life of our products and protect us from contamination by microbes such as bacteria, moulds and yeast. However, in 2004, a scientific publication reported a possible link between the use of parabens in deodorants and breast cancer, and, as a result, parabens fell out of favour. But the theory has since been widely discredited, including by experts within the European Commissions's Scientific Committee on Consumer Safety in 2011. Extensive research shows that parabens are not toxic to human cells and are some of the safest preservatives in current day cosmetics. Without them, we can put ourselves at risk of skin, eye, and scalp infections.

Parabens have also attracted concern for their environmental impact. In 2015, tt was reported in the American Chemical Society’s Journal, Environmental Science & Technology, that scientists had discovered antimicrobials from parabens, in the tissues of marine mammals, including dolphins, sea otters and polar bears. However, Marshall explains that it’s not a reason to completely dismiss the use of parabens, especially in cosmetics, as different parabens have shown to have different impacts rather than being a black and white issue. Short-chain parabens, such as methyl and ethyl, for example, are biodegradable and have low bioaccumulation, Marshall explains.

Longer chain parabens, however, have been found to have a higher aquatic toxicity, but are rarely used in cosmetics so aren't generally released into the environment, she tells Bustle, revealing that Australia, the United States, Canada and Europe have all done extensive aquatic and toxicity research and found that most are below the levels of persistent aquatic pollutants. "In terms of personal care cosmetics, the effect is very low versus the effects of other pollutants (like plastic) have on the environment. In an emotive sense, it's very easy to say 'give up your skincare products with parabens to protect the environment,' but to truly affect change, you'd have to give up preserved foods, beer, paint, etc," she adds.

Sulphates are another ingredient that were wrongly linked to cancer since the early 1990s. This has also since been disproven. Sulphates, found in the majority of household items from body wash and shampoo to cleaning products, are a surfactant, trapping oil-based dirt that can be separated from your skin and washing them down the drain. As it’s such an effective cleansing ingredient, when used on skin and hair, it can strip the natural oils, which is what makes it particularly drying when used on already dry skin. Irritation can occur when products that are left on the skin, but sulphates are not unsafe, it’s just a case of personal preference when it comes to using them.

However, despite the misinformation out there, having access to studies, experts, research, and debates that discuss the use of synthetic or natural ingredients isn’t all bad. Consumers now demand transparency from brands and social media allows us to directly communicate with them and get answers. Marshall says, “It's made brands work a little harder, and consumers [have become] savvier.” The complex process of raw material supply and the industrial production of cosmetic products can be better understood too, says Farmer, and that will ideally put a stop to the equivocal information that's previously been on the market in regards to this.

For Jeanette Thottrup, founder of natural skincare brand Seed To Skin, the influx of brand transparency is a welcome change in the industry as we are now more clued up on what’s going into our products. “I think it is very nice to finally see the consumer wanting transparency after the skincare industry has been in the dark and unquestioned for decades,” she says. Within her line of skincare, the homegrown natural ingredients from her farm in Tuscany are combined with molecular science to deliver natural products that don’t compromise on efficacy. It’s all about education, she says. “I will always favour natural ingredients wherever possible, but natural ingredients alone do not always do the trick — even natural ingredients can be toxic if they are not sourced from the right producers or processed the right way, it’s not just black and white.”

As for cutting through the noise in the natural versus synthetics debate, a better approach is needed, says Dr Sam Bunting, cosmetic dermatologist and founder of Dr Sam Bunting Skincare, and more focus needs to be on what actually works in contrast to whether it was man-made in a lab or taken from nature. “We should be driven by efficacy and data, so we know what we can expect to achieve," Bunting says. "We should be driven by ingredients with a proven track record for safety. And we should make decisions based on what’s in the pot, not what’s not.”