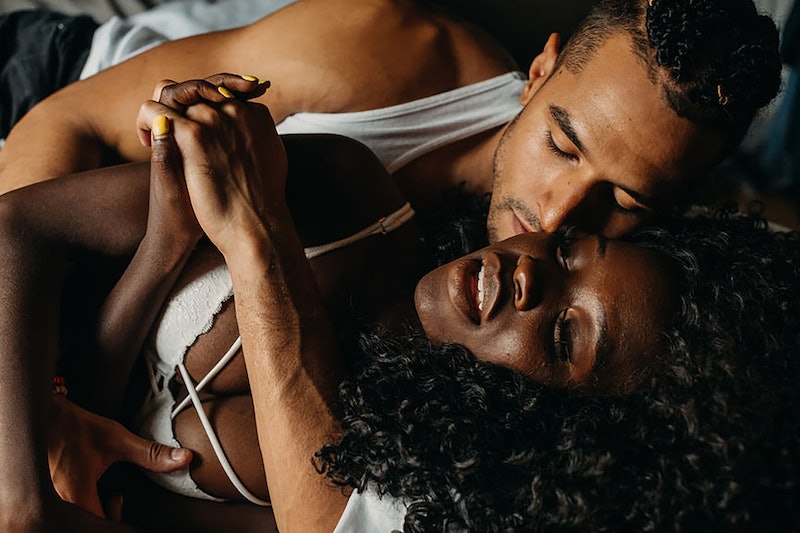 I'm not sure I need to make the case that orgasms are pretty great. Whether you have some post-date-night action between the sheets on the cards or simply a night in with yourself planned, orgasms can feel amazing and put you in such a relaxed state of mind. But, the question is: are orgasms good for your health? Studies have suggested there may be a lot more going on than you first thought.

When you orgasm, your body releases the hormone oxytocin, which is sometimes called the "love hormone," into your bloodstream, Psychology Today reports. One of the main things that oxytocin does is relieve stress.

But orgasms don’t just leave you feeling happier and more chilled out. For those of us out there who really struggle to get to sleep, some experts have suggested that orgasms may help with insomnia. Lying awake, tossing and turning at night can be really rubbish. When faced with the options of going for a run, taking a sleeping pill, or having a mind-blowing orgasm, I think I know which one I would pick. Speaking to Women’s Health, former sexual therapist Dr Nicole Prause said: “We know that people use masturbation for sleep. And we need to think how we can advise patients to use orgasm more strategically as a tool to help them sleep better.”

The connection between orgasms and sleep also works the other way. According to a study published in the Journal of Sexual Medicine, women who get enough sleep were likely to want sex more often and experience higher levels of arousal than those who don't get enough shut eye.

The fact that orgasms can lower stress and improve sleep is awesome, but the benefits don’t stop there. Some research has suggested that orgasms can alleviate physical pains like headaches and migraines, and act as natural painkillers. A study conducted in 2013 at the University of Munster found that orgasms induced by sex can lessen headaches in 60 percent of migraine sufferers and 33 percent of those who experience cluster headaches.

If you aren’t already fully convinced that putting your pleasure first is a good idea, the fact that it's increasing your mental and physical wellnesss should give you the assurance that you needed. One study has even suggested that there could be a link between frequent orgasms and living a longer life. Author of The Longevity Project: Surprising Discoveries for Heath and Long Life Howard S. Friedman used previous data collected by Lewis Terman on marital satisfaction to establish if there was a link between how many orgasms women had and whether they lived longer. He concluded that the women who reported having more orgasms during sex tended to live longer, according to Psychology Today.

So, there you have it. While it's clear that sex and orgasms can leave you feeling really good, they also may be doing good for your overall health and wellbeing. If that isn’t a reason to set aside a bit of time for self-love, I don’t know what is.

More like this
Cookie Jarring Is The Dating Term You Need To Know
By Sophie McEvoy
Are Quality Time & Physical Touch Love Languages Compatible?
By Lexi Inks
Why Experts Say Sleeping With A Fan On Isn’t Totally Risk-Free
By Sophie McEvoy
We Need To Talk About Monkeypox
By Sam Ramsden
Get The Very Best Of Bustle/UK