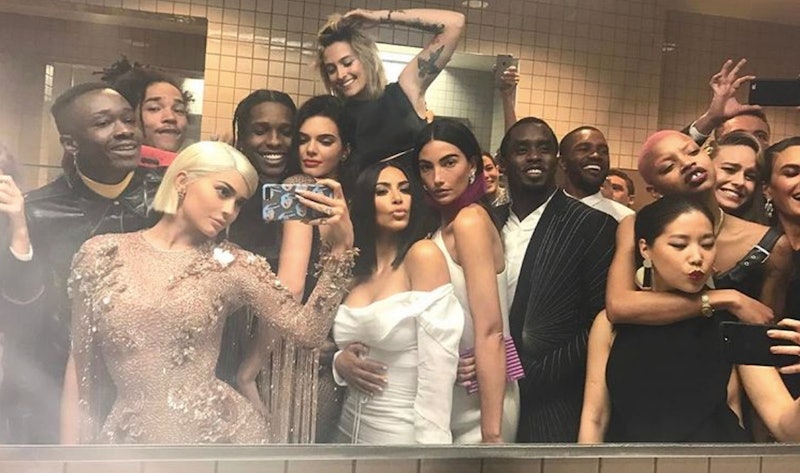 Kylie Jenner/Instagram
By Ari Bines
May 3, 2019

The Met Gala is an award show unlike any other. Admissions into the event costs 10 times more than any rent payment, there are unimaginably long trains on thousand-dollar gowns, and attendees aren't even allowed a cell phone at the Met Ball. Crazy, right?

Other than the astonishing pieces of fashion that hit the red carpet, no one actually knows what happens inside the upscale charity event. Treating the night like its 1995, there are no cameras allowed inside — cell phones included.

In 2015, Page Six reported that Anna Wintour and the Metropolitan Museum of Art made the Met Ball a camera and social media-free zone. Guests attending the gathering were informed in a notice that “The use of phones for photography and social media will not be permitted inside the gala.”

But in this social-media user world, celebrities can’t always resist a quick snapshot at one of fashion’s most noteworthy events of the season.

At the 2017 Met Gala, Kylie Jenner not only broke the rules, but took one of the most epic celebrity bathroom mirror selfies to grace her Instagram page. Featuring famous faces like sisters Kim and Kendall, A$AP Rocky, Luka Hall, Slick Woods, Brie Larson, Diddy, and more, Kylie did her fans a huge service with a simple "annual bathroom selfie" as the caption.

According to Forbes, entry into the Met Gala is a whopping $30,000, and if an entire table is put forth for attendees and their guests, the price goes up to $275,000. For an event so costly, exclusivity is key in making the Met Ball special enough to have such hefty-priced tickets.

Not having a cell phone to take a quick pic isn't the only hindrance Met Gala attendees face. In addition to Wintour's "no cell phones" rule, celebrities are asked to follow other rules to stay in the good graces of Vogue's leading lady of editorial fashion.

According to Independent, a new rule had been instated in 2018 that no one under the age of 18 is allowed admittance. A spokesperson from the Met Gala explained to Independent that it's merely "not an appropriate event for people under 18."

While there aren't too many underage teens who would enter the Met Gala, Maddie Ziegler is one of the few who the new rule affects.

At the time, many thought she was joking, but the age restriction was a tried and true rule. The exception to the rule is if parents attend as well, because stylish teens as Willow Smith has rocked the Met Ball red carpet in previous years.

Other bans at the Met Gala include smoking, an illegal act in all of New York City office buildings, bars, and theaters, certain foods aren't served to avoid onion breath, and even celebrity spouses aren't permitted to sit with each other at the actual event.

In 2017, Page Six had reported that donors of the Met found distaste in some guests smoking in the bathroom.

“As a donor to the Met, I was so insulted to see all these ‘celebrities’ smoking and taking selfies of themselves in the bathroom. Mostly, it’s disrespectful to the art collection, which needs to be kept 100% smoke-free."

Thus, the ban was put into place and even labeled on notices as a reminder that the act was illegal.

Wintour also decides what food is to be served and where guests will be seated.

A former Vogue employee explained to The New York Post that Wintour eliminates onions and parsley from the menu “because you don’t want that stuck in your teeth.” Plus, onion breath isn't cute in Wintour's regard. The event's food menu is strict, but also ensures people with food allergies are taken care of.

Seating arrangements are an additional feat event planners have to overcome. Wintour ensures that people who have attended the Met in previous years don't sit with each other more than once.

Sylvana Ward Durrett, the director of special projects at Vogue, explained in the 2016 documentary The First Monday in May that everyone should meet everyone.

"The whole point of these things is to meet new people, and to be interested in what others are doing" Durrett explained. "What's the point if you come here to hang out with your husband?"

Although with this extravagant event comes a lot of bans and rules, it makes for an incredible night for fashion.