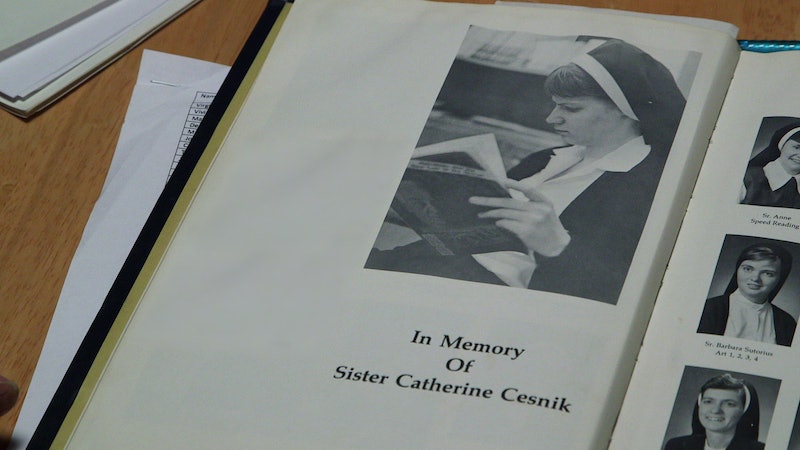 The Keepers, a new docuseries on Netflix, examines the allegations of abuse that Sister Cathy Cesnik may have uncovered before she was murdered. Some of the victims at the Baltimore Catholic school where Cesnik worked recovered memories of abuse by a priest at the school, Father Joseph Maskall, years after the abuse was to have taken place. (Maskall denied the allegations until his death.) The series shows that repressed memories cannot always be trusted in a court of law, but are repressed memories ever fake? When the priest in question was in court, the a false memory expert testified against the veracity of the recovered memories. This defense is common, but complicated.

The phrase "false memory syndrome" describes a condition in which someone is affected by memories they have created — but it is not recognized in any medical journal as a psychiatric illness. There are books purporting that repressed memory is a myth, but those are pretty unsubstantiated theories. Dissociative amnesia, on the other hand, is recognized by the scientific community. So is memory loss as a symptom of post-traumatic stress disorder.

In fact, the term "false memory syndrome" was coined by Peter and Pamela Freyd after their daughter Jennifer Freyd accused Peter of childhood abuse that she had repressed. The couple also founded the False Memory Syndrome Foundation. According to "Crisis or Creation?A Systematic Examination of 'False Memory Syndrome,'" by Stephanie J. Dallam, Peter's own brother William said in a statement that "The False Memory Syndrome Foundation is a fraud designed to deny a reality that Peter and Pam have spent most of their lives trying to escape." Dallam calls for this theory to be rejected completely.

Memory is a tough thing to prove, especially without witnesses. I don't think I could say definitively that all recovered memories are 100 percent real. Every scientific process has error. However, the idea that repressed memories could be fake could be used to undermine victims who say they've remembered past trauma, and it's better to at least investigate claims of past trauma than to dismiss them completely.