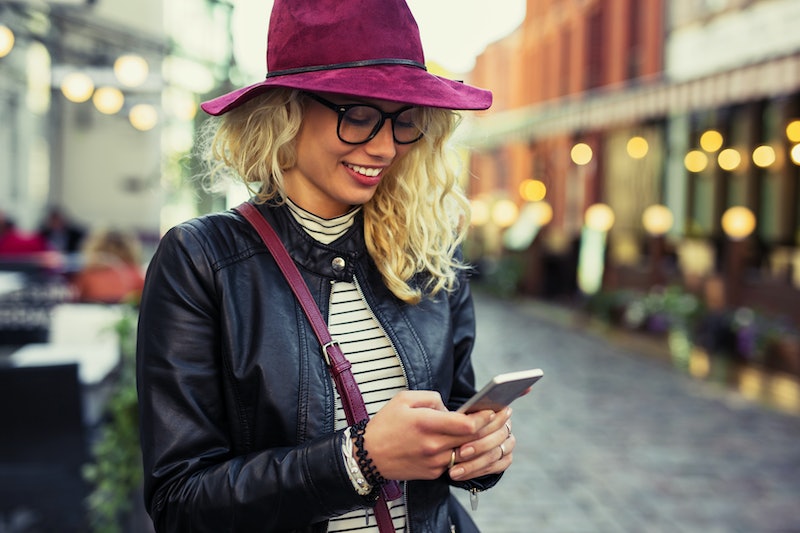 If you're old enough, you may have grown up with your parents yelling "don't watch too much TV, or your eyes will go square!" There's not much risk of that, but these days, we're exposed to one screen more than any other: the glow of our smartphone. And research now suggests that, for many people, smartphone screen exposure is making our eyes worse. Think about it: you're staring at a tiny screen for hours a day, trying to absorb as much content as you can while quickly scrolling through your favorite apps. Combined with most of us staring at a computer screen from 9 a.m. to 5 p.m., and it's a recipe for more trips to the eye doctor.

"More than 83 percent of Americans report using digital devices for more than two hours per day, with 53.1 percent using two digital devices simultaneously," optometrist Dr. Justin Bazan, a medical advisor for The Vision Council, tells Bustle. "With an increase of digital technology, many individuals suffer from physical discomfort after screen use for longer than two hours at a time."

There are several ways in which smartphone screens can harm eyesight and eye health. When we stare at a screen of any kind, we blink far less often than we do when staring at other people or at the wider environment. A 2017 study found that those who spent a lot of time on a smartphone or tablet — which is increasingly common among young kids — were more prone to dry-eye disease. It's a condition where the eyes don't produce enough moisture, in the form of tears, to provide a protective film, meaning that the eye surface becomes more easily irritated. The study also found that once the smartphones were taken away, the dry eye symptoms reduced drastically.

One of the other areas is digital eye strain, otherwise known as computer vision syndrome. It's a result of looking intensely at screens for more than two hours at a time, focusing and refocusing your eyes to read content. Over half of Americans "report experiencing symptoms of digital eye strain, which include eye strain, dry eyes, headache, blurred vision, and neck and shoulder pain," says Dr. Bazan.

Digital eye strain is also affected by the brightness of your screen. What's less clear is whether or not the "blue light" normally transmitted from screens like smartphones and laptops causes issues with your eye itself. We know that blue light inhibits the release of melatonin, which naturally regulates your sleep, because it creates the impression that it's still daytime. (This is why it's a bad idea to look at your smartphone in the hour before you sleep.) But there might be a further problem for our eye health.

Blue light, as Health points out, isn't filtered by our cornea or pupils, and so is beamed directly to our retinas, where it may cause damage — but there isn't a lot of firm evidence to suggest what it might do, or if smartphone exposure is sufficient to cause any real problems. Ophthalmology professor Chris Hammond told the Financial Times, “The energy level emitted by phones and iPads is extremely small. Even on a grey day outside, your blue light exposure is something like 30-fold more than looking at a tablet or a screen.” Dr. Bazan agrees. "The screens of all digital devices emit blue light and can be high in glare, which may put strain on the eyes and body," he tells Bustle. "But The Vision Council does not have any internal research that proves blue light is harmful to the eyes or body."

If you work with screens a lot and want to reduce any possible damage to your eyes, Dr. Bazan recommends taking some steps. "Eyewear is available with lenses featuring magnification, anti-reflective and blue light-filtering capabilities to help reduce the symptoms associated with digital eye strain," he tells Bustle. "You should also keep digital devices at about an arm’s distance away from the face, increase text size on digital devices to better define content on the screen, take frequent breaks from using digital devices, reduce overhead lighting in the room to decrease screen glare, and adjust the lighting on digital devices."

Beyond affecting our mental health and our sleep, smartphones do have the ability to affect our eyesight. If you're experiencing symptoms of digital eye strain, it's a good idea to put down your smartphone and go see a doctor.