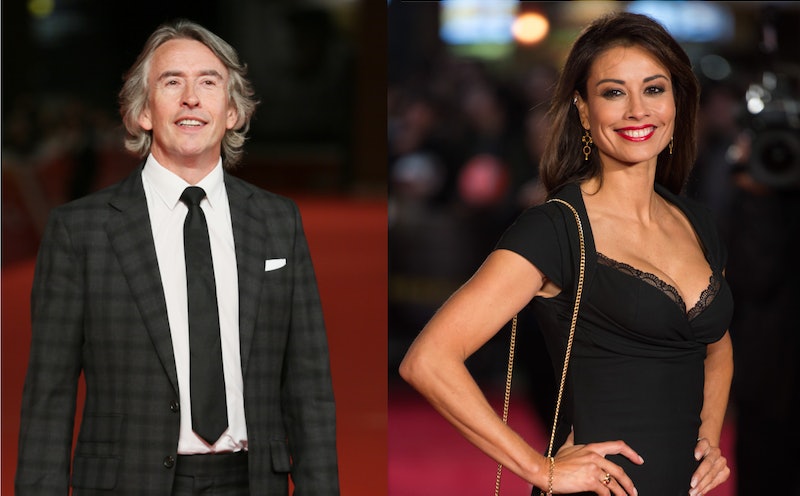 To say I'm excited about the return of one of Steve Coogan's most iconic characters is an understatement. While my mind may be preoccupied with all things Partridge, the premiere of BBC One's This Time with Alan Partridge has also brought forth some unexpected speculation as it seems Steve Coogan and Melanie Sykes are reportedly dating. Yeah, I bet you weren't expecting that — I certainly wasn't.

As reported by The Sun, the pair met at a film screening for Coogan's latest film Stan & Ollie in early January, and were subsequently pictured together. "She looked absolutely stunning and really caught his eye," a source told the newspaper. "I don't think anything happened that night. They got together later. But there was a real connection when they chatted at the event."

According to the source, Coogan and Sykes began dating soon after the launch of the film and apparently spent last weekend together at his country home in Sussex. "The weekend together was a bit of a test of whether the relationship has legs — and it seems it has," the source said. "They're both from similar backgrounds and originally come from the Manchester area, so have a lot in common." I've reached out to both parties' representatives for clarification on the speculation, and has yet to receive comment.

However, it seems as though this sort of speculation follows Sykes' whenever she is photographed — or even interviews — a man, even if they share no prior history. It may sound absurd, but for Sykes' it has become a common occurrence. "Since my 20s I've been constantly put with men," the presenter told The Sun's Fabulous magazine in 2018.

"Half of them I've maybe only interviewed or been at a party with but never really known them other than that, and I'm vilified for apparently being some kind of sexual predator, which is absolutely laughable," she explained. "It's like I cant even be seen with a man without somebody asking: 'Oh, are you f**king him?' And it's like: 'Wow, no, he's a mate!"

"I read a lot, I'm very interested in art, in films, I love to cook, but it all comes down to what I'm wearing and who I have sex with. And I'm tired of it."

I'm not surprised. And even if they were together, they have no need to broadcast it to the world as it's none of our business. "I don't want to confirm or deny speculation because that means I'm talking about it," she said. You tell 'em, Sykes.

And while the presenter may be tired the of the rumours or speculation, she isn't hurt by them as she "knows the truth." But, that doesn't stop her from worrying about the effect it may have on her kids. "I do worry about the boys because they're teenagers and they don't want people going up to them at school going: 'Ooh, is your mum seeing this person?' It's so embarrassing for them," she explained.