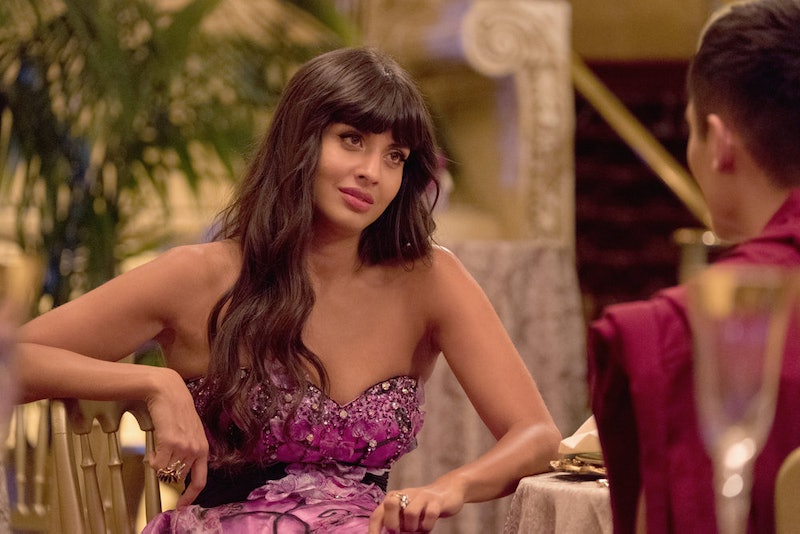 Even when Team Cockroach is in on the torture on The Good Place, they still manage to have some pretty bad days. That said, there's more opportunity for personal development and making connections when your memory isn't being erased on the regular, and the Oct. 12 episode ended with a pretty surprising development. Tahani and Jason hooked up on The Good Place — maybe they really are soulmates after all.

Sure, Jason's stories on The Good Place might all be about dance crews, but he kind of delivers some killer advice — first to Michael, and then to his housemate. Tahani was feeling down after realizing that Vicky's plan to torture her with party planning actually worked. The shallow torture made her feel like a shallow person, and Jason was super sweet in his attempts to comfort her. "Be nicer to yourself," he said. Next thing thing they knew, Jason was making breakfast. He knows how to make cereal! While Michael was having an existential crisis, Tahani had a nice moment of peace.

The Good Place seemingly deconstructed the idea of a soulmate in Season 1 by putting characters together who didn't connect, but maybe they're meant to pair off after all. There's got to be a reason that these four people were put in The Bad Place together. Four people meant to torment each other sounds like a family to me.

Are Tahini and Jason going to fall in love? The two of them may seem like total opposites, but they're total opposites who might make a really good team. In Season 1, Tahani was depressed that her soulmate never talked to her, and was initially stunned to discover that her "soulmate" was a less than classy Floridian amateur DJ who didn't know what Impressionism was. However, in the Team Cockroach version of the Bad Place, Tahani actually gets to know Jason as they embark on this mission with Michael together. Surely some soulmates learn to love one another, rather than falling in love at first sight.

Eleanor and Chidi are pretty dissimilar as well, and as Mindy St. Clair revealed in the previous episode, those two are pretty into each other, and could very well end up smooching before the season is over.

In a way, The Good Place is kind of a 'shippers dream. You could match any of these characters up and it would work, from Tahani and Chidi to Eleanor and Jason as well as Eleanor and Tahani. Speaking of popular 'ships, however, there's just one major, newly bleached-blonde problem with this Jason and Tahani rendezvous. What about Janet?! Her relationship with Jason in Season 1 was so cute. It would be a shame to let that go. The season is still young, so surely the fallout from this will last a while.

Still, it's nice to see Tahani happy — and it's nice to see Jason valued at all. That's one of Michael Shur's greatest strengths as a showrunner. None of his characters on The Good Place and Parks and Recreation are ever the butt of a joke. While Jason Mendoza and Andy Dwyer aren't as smart or as competent as the other characters, they're not relentlessly laughed at or looked down on. Even Jerry/Gary/Larry on Parks had a beautiful, loving family at the end of the day. Jason may be a goof, but he brings something to the table.

No matter how this pans out on The Good Place between Jason and Tahani, it was still a nice moment. Someone's gotta stick up for Tahani. Weirdly, the fact that she was aware of her own torture kind of made the torture worse. Maybe that's the twist coming later in the season. Knowing this show, even a casual roll in the hay could be a major clue about what's really going down.

More like this
'Succession' Season 4 Will Be An "Absolute Banger" According To Cousin Greg
By Bustle Staff
All The ’70s Easter Eggs You Missed In 'That ’90s Show'
By Grace Wehniainen
Everything To Know About A Potential 'Lockwood & Co.' Season 2
By Gretchen Smail
This 'Gossip Girl' Wardrobe Error Has Gone Viral On TikTok
By Alyssa Lapid
Get Even More From Bustle — Sign Up For The Newsletter
From hair trends to relationship advice, our daily newsletter has everything you need to sound like a person who’s on TikTok, even if you aren’t.