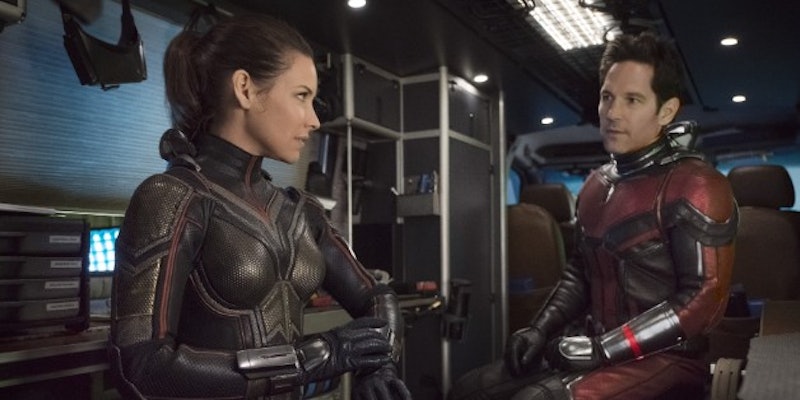 Spoilers ahead. Marvel hits two milestones at once with the release of Ant-Man and the Wasp: it's the 20th MCU movie to hit the big screen, and it's the last official film of Marvel's Phase 3. In keeping with what's now the studio's tradition, Ant-Man and the Wasp has two post-credits scenes, but with the film taking place before the events of Avengers: Infinity War, are the Ant-Man 2 post credits scene worth sticking around for? Considering they're the only glimpse fans will have of more Marvel information before Avengers 4 comes out, it's most definitely worth staying in your seats.

For those unfamiliar with the increasingly convoluted timeline, Ant-Man and the Wasp is slightly out of phase with the rest of the MCU, taking place after Captain America: Civil War but before Infinity War. Fans know neither Ant-Man nor The Wasp (who makes her first real appearance as a superhero in this film) show up to fight Thanos in Infinity War, so the main question would be what the post-credits scenes could possibly show us that we don't already know. Both characters are confirmed for Avengers 4, along with the original Wasp, played by Michelle Pfeiffer, so the hope is any end sequence would tie in Ant-Man to the events of Infinity War and spill details on the next Avengers.

If you need word from the horse's mouth, Paul Rudd confirms just that in a Late Night on Seth Meyers appearance, telling fans, "You have to stay through the end because when you see this thing, through those post-credit scenes, there's mind-blowing stuff that ties into Infinity War." And sure enough, the first post-credit sequence shows the effects of the finger-snap heard 'round the universe, as Lang shrinks down to the Quantum Realm under the supervision of Janet, Hope, and Pym to help out friend-turned-enemy the Ghost. Janet warns Lang to avoid the Realm's vortex, or he'll be stuck in time. Lang retrieves the needed regeneration particles, but when he calls out to the three to bring him back out, there's no response...and we see the ashes of all three scientists floating away as Scott continues to cry out for help.

That's right; Ant-Man is stuck in the Quantum Realm, next to a conveniently positioned deux-ex-time machine that might be his only way of getting out. This is a major setup for something big, and adds weight to the fan theories knocked around since poor Spidey bit the dust, yet was confirmed for another movie: the loophole to bring back all those beloved characters will involve some form of time travel. Seriously, why even point out a time vortex if you're not going to use it?

Given that the Captain Marvel movie is confirmed as a '90s throwback as well, and that the hero ties in to the post-credit sequence of Infinity War, all signs point to the time vortex and Quantum Realm as key elements of Avengers 4. Whether or not this also plays into Marvel's closely-guarded Phase 4 remains to be seen, but it would be a very easy out for any beloved characters to come back into the fold, especially those who haven't yet gotten a sequel (Doctor Strange, anyone?)

There is a second post-credits sequence at the very end of Ant-Man 2, and after the major heaviness dropped on fans knocking out three characters we just spent an entire movie rooting for, you'll want to stick around just so it'll cheer you up. It's brief, but moving through a post-Thanos empty San Francisco, toward Scott's house, we hear a drum kit. Inside, an ant programmed to follow Scott's daily routine is having a major jam session; cut to black.

Any bit of levity's welcome after that major bummer, but you don't just introduce a time vortex possibility if you don't plan on using it. Whether this points beyond Avengers 4 remains to be seen, but it's the only hint fans have between now and May 3, 2019 when Avengers 4 drops.