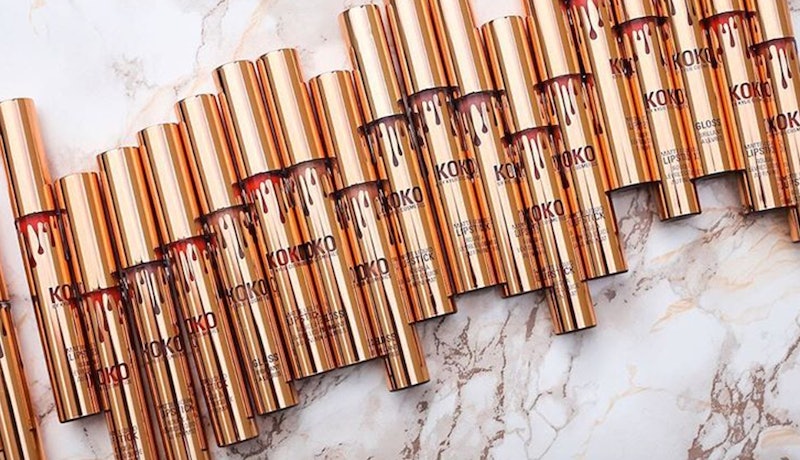 A new Kylie Cosmetics Koko Kollection is upon us. The second generation Koko collection features four lip products, like the original range. But it adds a four-pan, highlighter x contour face palette. The new Koko Kollection drops on Wednesday, May 31 at 6 p.m. ET/3 p.m. PT. The first Koko Kollection was a major success for the brand and featured three matte liquid lipsticks, sans matching liners, and a super sparkly gloss. What's the deal with the texture of the new Koko lippies? Are the new Koko Kollection lippies, which come in a set, all matte?

No, they are not all matte, actually! It's these same textural breakdown as the first Kollection. There are three mattes and one gloss, leaving you with options for layering. You can mix and matte.

Doll is an orange-y red, while Bunny is a soft mauve. Baby Girl is a watermelon-like pink. Sugar Plum is a shimmery peach and has the distinction of being the sole gloss in the bunch.

The lippies come in the familiar, gold Koko packaging and they still don't have an accompanying lip liner. So they are matte liquid lippies, but not official Lip Kits, since those have two elements.

Yes, Koko V. 2.0 features colors that are in the same family as other Kylie lip shades. Bunny is like the sister of Love Bite. Doll and Baby Girl fit with 22, Mary Jo, Kristen, and OKurrr.

Have a look at the Khloe lip krew and the additional face palette.

You can clearly see the textures, thanks to this swatch shot. All of the lippies are matte, save for the second from the left, which is the lighter but equally as lovely gloss.

The packaging sets the Koko Kollection apart from the usual Lip Kits and lippies. Perhaps the second Koko Kollection will be available as singles eventually. The first Koko Koll came back, despite originally being limited.

The Koko Kollection is offered as a set and each of the hues are so unique. That means you can change your lip color or formula to suit your mood.