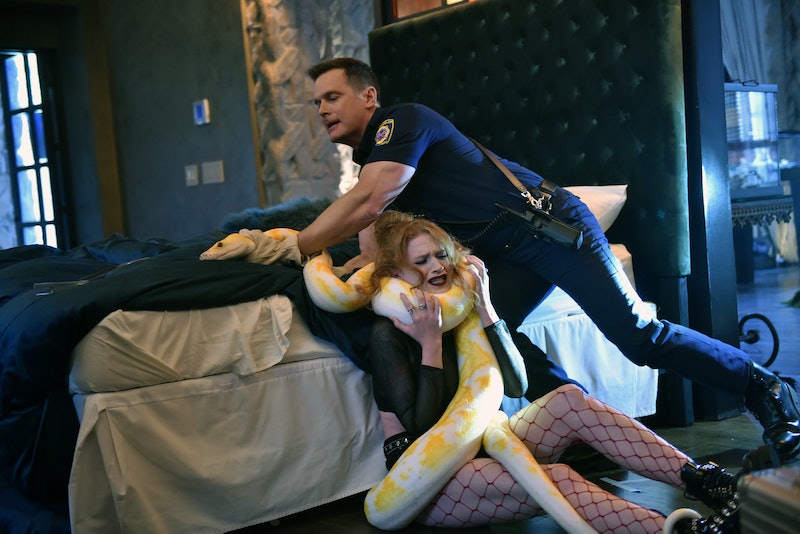 From a newborn baby stuck in a drain pipe to a giant snake choking out its owner, 9-1-1 featured some insane emergencies in its series premiere. Ryan Murphy's Fox drama follows emergencies from the 9-1-1 call all the way to their resolution in some cases, all told through the eyes of three emergency responders. But the most gripping part of the series premiere didn't have anything to do with the first responders themselves. It was the fact that 9-1-1's emergencies are based on actual 9-1-1 calls that was the most shocking, as some of the incidents didn't even seem possible.

While the emergencies vary from week to week, 9-1-1 has three main characters that remain constant throughout the series: Friday Night Lights favorite Connie Britton plays 9-1-1 call dispatcher Abby Clark, Parenthood alum Peter Krause plays firefighter Bobby Nash, and American Horror Story alum Angela Bassett plays LAPD officer Athena Grant. The procedural may sound predictable enough, but it comes with a fascinating twist: while all three main characters work to de-escalate the same emergencies, they hardly ever if at all interact with each other. And of course, all of their personal lives when they are off the clock are a total mess.

But it's the bonkers emergencies they deal with that are the most entertaining to watch. First came the baby in the pipe: When a stoned guy heard a baby crying in his bathroom wall, he called 9-1-1. But the fire department heard the baby crying too when they arrived on the scene, so it wasn't just a drug-induced hallucination. There was actually a baby stuck in the pipe behind his wall! Yeah, seriously.

Turns out a teen girl gave birth over an open, exposed pipe in a top floor of an apartment building where there was construction, and her father made her abandon the baby in shame. The firefighters cut into the wall, isolated the pipe where the newborn was stuck, and gently pulled him out before sending him to the hospital.

A baby getting flushed down a pipe sounds so wacky that it couldn't possibly be true ... right?! Wrong. In 2013 in China, this. Actually. Happened. "[Creator] Ryan [Murphy] had heard about the baby in the wall from a YouTube clip in China and it actually happened. Isn't it shocking?" executive producer Alexis Martin Woodall tells Bustle. "And I remember when we were shooting it thinking, 'This actually happened!' There's some crazy stuff that goes on in our world and first responders have a very different life than we have. We want to appreciate them."

The real-life baby stuck in a pipe was born in secret by a single mother, and survived his rescue attempt. When executive producer Brad Falchuk first heard that story, he became "obsessed with it for years."

"If you watch the actual video, which is in Chinese, it's really hard to watch," he tells Bustle. "And that baby lived." But how the story played out onscreen in 9-1-1 wasn't exactly how it happened in real life. The showrunners took the imagery they saw in the YouTube video and crafted their own story.

"The fun of it is, once you have that [story] you then construct, well, what are all the things that can go wrong?" Falchuk says of the storytelling process. "Coming up with different ways to cause trouble for them is fun. It's the same thing you do on any medical show. Generally what's real is more interesting than what you can make up."

Another big fan of the baby in a drain pipe story is executive producer Tim Minear, who jokes that while "it's always great if you can find stuff you can riff off of," at some point, "we're going to have to start making up things because that's what they pay us to do." But he explains that the process the writers came up with for 9-1-1 is to find these real-life crazy stories and then expand on them.

"The baby in a pipe was the genesis for how we're approaching coming up with these cases. We're trying to create viral videos," Minear says. "What's the great, amazing, WTF moment you might see on YouTube, in a compilation of ultimate fails or scariest tragedies or things gone wrong? It's harder to find a story in those than you might think."

And while he promises they aren't just "pulling things off the internet," Minear and the other showrunners wanted to bring as much reality into the new procedural as possible. "That is the inspiration, to try and lean into the social media culture of that instant, 'media is everywhere' and cameras are everywhere," Minear says. "People are used to seeing true life events that would make their heads spin."

Woodall adds that grounding all the emergencies on the new series means that 9-1-1 is "escapist but still relatable." "It's hopeful," she says. "Some people are going to die because it's an emergency show, but some people are going to live and you'll see them succeed." Along with the baby in a drain pipe, the premiere also had a giant snake trying to suffocate its snake-loving owner to death, and the firefighters actually chopped the head off the snake to save her. And you guessed it: that was also inspired by a real-life story.

"The ones in the first episode are all inspired by true stories," Falchuk promises. "The real problem we're having is that we've done so much weird sh*t on American Horror Story that sometimes we come up with stuff and it's like, oh no, we just did that." And while he promises that viewers will see the firefighters fighting actual fires, that's not all they'll be doing.

"Going off and fighting fires is less interesting and something we've seen before," Falchuk says. "We're really trying to tell stories we haven't seen before. We wanted to do a network procedural, but our version of it, one that was a little unusual with a twist. It's like Nip/Tuck but a network procedural. We want your jaw to drop."

Of course, there are also more normal emergencies portrayed on 9-1-1. In the premiere alone, a home invasion was stopped, a little girl's life was saved, a drowning teen was resuscitated, and sadly a woman took her own life before the firefighters could talk her down from the ledge. But Minear promises that more stories like the baby in a drain pipe and the giant snake choking its owner are coming, and they're all based on true stories.

"I will say, without giving away too much, there are in the first five episodes at least five things that you will say, 'Mmm, I don't believe it,' that were all based on something that's true," he says with a smile. So no matter how crazy things might seem, remember that there are real-life first responders who actually had to deal with these situations. And more often than not, they figured out a way to save the day.

More like this
‘Squid Game’ Creator Hwang Dong-Hyuk Just Dropped A Major Season 2 Tease
By Brian Anthony Hernandez and Bustle Editors
Devi Is Going To Meet A “Smoldering Bad Boy” In ‘Never Have I Ever’ Season 4
By Jack Irvin and Gabrielle Bondi
Nicola Coughlan Shared A Lady Whistledown Excerpt From ‘Bridgerton’ Season 3
By Grace Wehniainen, Alyssa Lapid and Sam Ramsden
The ‘Emily In Paris’ Season 3 Release Date Is Here, Plus The First Footage
By Bustle Staff
Get Even More From Bustle — Sign Up For The Newsletter