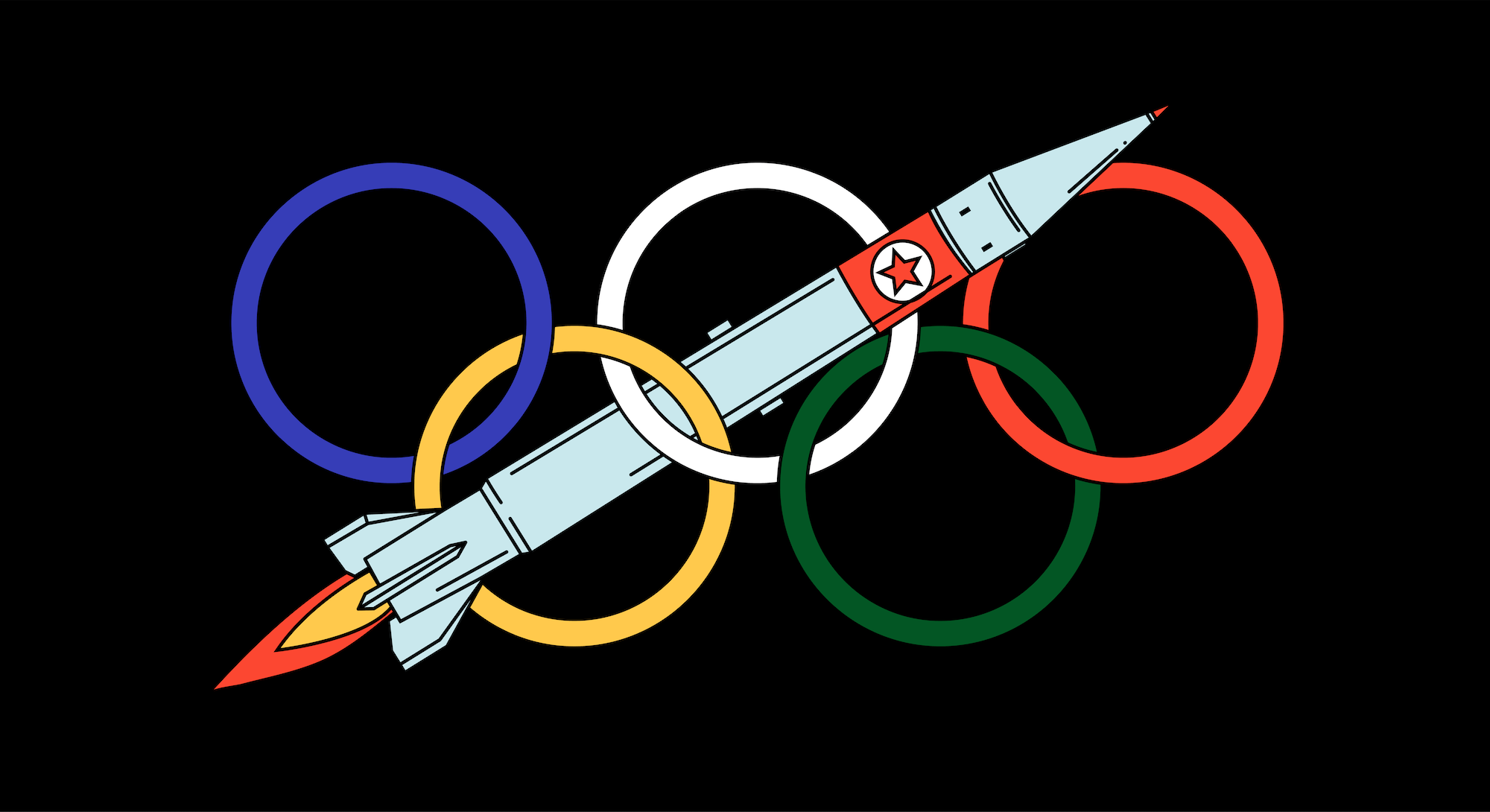 With just a few weeks to go, South Korean officials are making moves to ensure safety and security during the 2018 Winter Olympic Games in Pyeongchang next month. Thousands of athletes and spectators will gather to take part in events just about 50 miles away from the North Korean border, and experts say tensions with North Korea are at an all-time high.

"If North Korea indeed intends to attack or provoke, there's very little we can do," Yun Sun, a Senior Associate with the D.C.-based Stimson Center, tells Bustle. But South Korean officials are looking to encourage cooperation with the North by persuading the Hermit Kingdom to send a delegation to the Olympic Games. While having their own athletes and supporters at the event might be enough for North Korea to halt weapons tests or abandon other efforts to disrupt the games, it's far from a permanent solution — and it might also drive South Korea closer to its northern neighbor, and further away from the United States.

The escalating war of words and economic sanctions between North Korea's leader Kim Jong-un and President Donald Trump — who promised to rain down "fire and fury" on the impoverished nation if it continues to advance its nuclear program — have allies of both countries scrambling for a short-term fix. South Korean President Moon Jae-in successfully brokered an agreement to halt joint U.S.-South Korean military drills while the world's top athletes are competing, in order to persuade the North to halt missile tests in response. In another apparent step forward, the South Korean leader says he's willing to meet his North Korean counterpart for high-level talks near the border next week, after Kim Jong-un proposed meeting to discuss his country's participation in the Olympics.

After boasting in a tweet that his nuclear launch button is "much bigger & more powerful" than Kim's, Trump took credit for the recent diplomatic gains between North and South Korea.

A Nuclear North Korea Is A Serious Safety Threat

This year, North Korea showed for the first time that it is capable of launching a missile that could reach the U.S. mainland. Experts have long worried that the country would be tempted to display its strength while worldwide attention is fixed on the Korean Peninsula during the Olympics this February.

"That's right in the window of when I would expect them to test a nuclear weapon," Jeffery Lewis, director of the East Asia Nonproliferation Program at the Middlebury Institute of International Studies, tells Bustle. "They've been doing tests about six months apart and we've seen them test in the winter before." But he notes, "There's no hard or fast rule."

That threat has officials working to ensure the North's cooperation ahead of the Games. Moon went as far as to suggest that athletes from the North and South march together under a unified flag during the Opening Ceremony, something they had done in 2000 and 2004. In the years that followed, newly-elected conservatives in the South pushed back against the North's nuclear ambitions, and talk of temperance and reconciliation went on hold. South Korean officials hope they can restart that dialogue and tamp down the threat of war.

"He is the Chief Pourer of Gasoline on the Fire."

Meanwhile, President Trump has been ratcheting up the rhetoric around U.S. military involvement on the Korean Peninsula. While the relationship between North Korea and the U.S. has never been good, the hostile words between the two ticked up this year; after North Korea proved its ability to strike the U.S., Trump launched insults at its leader, and both threatened war.

"He is the Chief Pourer of Gasoline on the Fire," Lewis says. Because a family dynasty rules North Korea, Lewis says its citizens "take what they would call the dignity of their leadership very seriously," making it hard for them to overlook Trump's taunts.

"No U.S. President has downgraded himself to [that] level," Sun says.

Beyond the war of words, the Trump administration has left a slew of senior diplomatic roles unfilled, including the U.S. Ambassador to South Korea. In mid-December, the administration reportedly tapped long-rumored nominee Victor Cha, a scholar and former White House official, who will need to be approved by Seoul and confirmed by the Senate. The U.S. has no diplomatic presence in North Korea.

"It conveys a sense of uncertainty to the countries we're dealing with," Sun says of the South Korean ambassadorship, which has been vacant since Trump took office in January. "[They're saying], we don't even know if the people we're talking to are still going to be there next week or next month."

How South Korea Is Stepping Up Security

South Korea has experience hosting world-scale events, including the 2014 Asian Games, the 2011 World Athletics Championships, the 2002 World Cup, and the 1988 Summer Olympics. But this time around, South Korea's Defense Ministry will deploy nearly twice as many armed forces as it did during the World Cup, according to Reuters, and is working with a private cybersecurity company to deter hacking attempts from the North.

"If North Korea intends to attack or provoke, there's very little we can do."

Security drills in Seoul have even included special forces rappelling down a skyscraper to simulate a hostage rescue and armed forces intercepting a bus to simulate a hijacking, according to CNN.

"I think for the additional security measure we can take, it will be psychologically comforting, but if North Korea intends to attack or provoke, there's very little we can do," Sun tells Bustle.

While a potential conflict between the North and South isn't new, neither is violence at the Olympic Games. During the 1972 Munich Games, Palestinian militants killed 11 Israeli athletes, while a domestic terrorist detonated a bomb, killing one person, during the 1996 Summer Olympics in Atlanta, Georgia.

Is The U.S. Preparing The Winter Olympics Or For War?

U.S. officials, including the Ambassador to the United Nations Nikki Haley, have muddled their messages over Americans' participation in the games, and about whether athletes will be safe competing there. In early December, Hayley said it was an "open question" as to whether tensions between the U.S. and North Korea would keep American athletes from attending the Games.

That "seems to be a pretty inflammatory thing to say," says Tom Plant, Director of Proliferation and Nuclear Policy for the London-based Royal United Services Institute for Defence and Security Studies. "I think we're still trying to get our heads into a place where war isn't just something we talk about in the abstract, but it's a political risk," though he acknowledged that "that probability is higher than I think we're all comfortable with."

Sen. Lindsey Graham (R-S.C.) stirred the pot Monday when he said that the U.S. should pull its athletes out of the Games if South Korea allows the North to send a team.

It isn't the first inflammatory statement from Graham: In early December, he said that the spouses and children of military service members stationed in South Korea should be required to leave the country, and that no more dependents should be sent to South Korea. (The military maintains that there are no plans to evacuate U.S. families from South Korea.)

"If we just evacuate the U.S. military families, how about the rest of the American nationals in South Korea?"

She says the action would signal to world powers that the U.S. is prepared for war.

"For countries like China and Russia, they look at the indicators of the American war preparedness," Sun says. "So if the U.S. indeed decides to evacuate military families, it would send a signal to countries in the region that the U.S. is not only considering a military option, it is taking action toward a military option." She says raising the hypothetical could be a way to strong-arm North Korea into taking action it's previously refused to take in order to avoid a war.

While the two Koreas have marched together in Olympic opening ceremonies, they are technically still at war. The agreement that ended violence in 1953 was only an armistice; no peace treaty was ever signed.

For its part, the International Olympic Committee has been unwavering in its public stance regarding athletes' safety. The IOC told Bustle in a statement that "athletes safety and security are of course a primary concern" and the organization is "in constant contact with the South Korean government." The IOC noted that the South Korea has not changed its position on the security of the Games, and that the Organizing Committee's preparations are on track.

Despite the IOC's reassurances, experts say it's likely that other countries are taking their cue from U.S. officials, and closely watching to see what they'll do.

Experts who study security on the Korean Peninsula have been holding out hope that North Korean athletes would qualify to compete in the Games — a best-case scenario for keeping the status-obsessed country in the spotlight, and for ensuring the safety of other athletes and spectators in attendance. In its history of participation, North Korea has won 52 Olympics medals, but only two have been earned during the Winter Olympics.

In late September, a pair of North Korean figure-skaters became the first athletes from their country to qualify for Pyeongchang. Yet the North Korean government stalled on an official decision to send its athletes, and a month later, missed an Oct. 30 deadline to secure their spots. In accordance with the rules, those spots have been offered to the next qualifier in line, Japan. The International Olympic Committee can add the pair back into the lineup, and has said repeatedly that it hopes for the North's participation. In his annual New Year's Day speech, Kim said he'd be willing to send a delegation.

"North Koreans tend to value appearing like a normal country."

"I think everybody believes the Olympics are likely to go off more smoothly if there are North Koreans participating, precisely because North Koreans tend to value appearing like a normal country," Lewis says.

Competing on the world stage is an appealing way for North Korea to gain international respect. Lewis points out that in interactions with foreign nations, North Korea has shown a regard for high-profile figures. Former President Bill Clinton secured the release of American hostages during a visit to the rogue nation, and former New Mexico governor and U.N. ambassador Bill Richardson, who visited North Korea in the 1990s, worked to return 22-year-old Otto Warmbier to the U.S. After being detained for nearly a year and a half, Warmbier returned home in a coma and died days later.

Lewis says these diplomatic overtures convey respect for North Korea — something it seeks to increase by testing a weapon.

"When the North Koreans are testing missiles or nuclear weapons, that's their sort of way of demanding respect," Lewis says, "but if they're participating in the Games, then they're getting that respect another way."