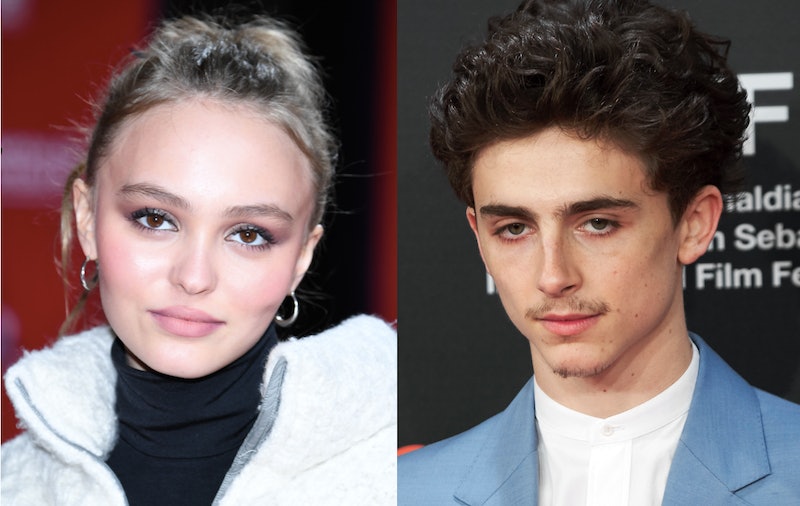 If some new reports are to be believed, there could very well be a new power couple taking over young Hollywood. So, are Timothée Chalamet and Lily-Rise Depp dating? According to E! News, the actors are sparking romance rumors after they were spotted getting close over the Sept. 29 weekend. (Bustle has reached out to reps for both Chalamet and Depp, but did not receive an immediate response.)

Depp and Chalamet apparently had a fun NYC hangout together and were spotted at multiple locations over the weekend. As E! News noted, they were seen enjoying their time at coffee shop Mud, where an onlooker reported that the the young stars were "enjoying themselves" during the low-key outing. Additionally, the publication also reported that the potential couple took to a few other locations, such as Central Park.

A source at Us Weekly shed a little bit more light on this possible relationship. On Oct. 1, Depp and Chalamet were reportedly seen getting more than a little close together in the Big Apple. A source claimed to the publication, "They were walking down the street and he stopped her and pulled her close. They started making out for a while, for over a minute.” So, it definitely sounds as though things might be heating up between the two.

Neither Depp nor Chalamet have commented on the state of their relationship together yet. While these reports definitely spark their fair share of romance rumors, it's still totally possible that the two are just good friends. After all, they recently worked together on a project which probably led to their close bond.

As Elle UK reported, the actors just finished working on the upcoming Netflix film, The King, a drama set in the 1300s based on a couple of Shakespeare plays. In the movie, Chalamet plays the main character, Henry V, while Depp portrays his wife, Catherine of Valois. So, even if they aren't officially dating in real life, you'll at least get to see some of their chemistry play out onscreen once the Netflix drama premieres in 2019.

Chalamet and Depp have both been linked to other young Hollywood stars in the past. According to JustJared, the Yoga Hosers star previously dated fellow model Ash Stymest before parting ways in April. The Call Me By Your Name star was previously linked to Madonna's daughter, Lourdes Leon, when the two both attended LaGuardia High School in NYC, per E! News.

During his appearance on Andy Cohen's Sirius XM show, he was even asked about his relationship with Leon. However, he didn't exactly open up about the situation. While he was open about answering questions about his dance floor moves with Madonna, he blushed when the subject of his dating life was brought up. Cohen asked him, "How long did you two date?" Chalamet answered, with a laugh, "Next question, I'm outta here."

Seeing as though Chalamet kept things a bit mum when it came to his relationship status, only time will tell whether he'll open up about these new romance rumors with his The King costar, Depp.