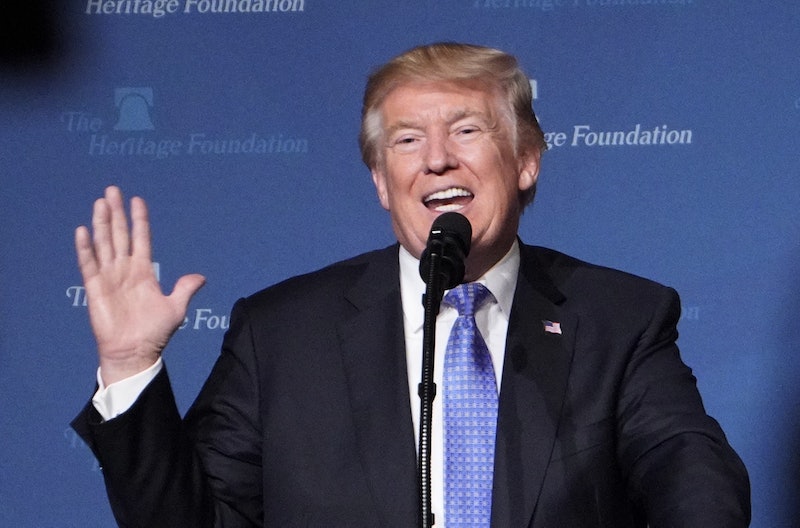 There's another legal argument being made against President Donald Trump, this one for his attempts at chipping away at the Affordable Care Act, or Obamacare. On top of efforts to repeal and replace the legislation, Trump signed an executive order to end subsidies that help keep health care affordable for millions of Americans; a move so damaging it brought Democrats and Republicans together in opposition. According to one legal scholar, Trump's attacks on the ACA are unconstitutional — even illegal.

Abbe R. Gluck, a law professor at Yale and the faculty director of the school's Solomon Center for Health Law and Policy, wrote for Vox the real implications of Trump's actions:

The intentional, multi-pronged sabotage of the ACA that we have seen over the past nine months — reaching new heights since attempts by Congress to repeal the law failed — violates both Trump’s constitutional obligations and quite possibly the obligations of his Department of Health and Human Services.

The reason why? Gluck explains that Trump "has a legal obligation, under Article II of the US Constitution." It reads that the president must “take Care that the laws be faithfully executed.” In other words, according to Gluck, he has to "make sure that our laws are implemented in good faith and that he uses his executive discretion reasonably toward that end."

Eric Segall, a professor of constitutional law at Georgia State University College of Law largely agrees. He says that Gluck is correct that "a president can’t just say, 'I don’t like that law, I’m going to kill it.'"

However, as a constitutional law professor, Segall says whether Trump has successfully killed the law is debatable and best left to health care experts to determine. "His tweets suggest that’s what he wants to do," Segall tells Bustle. "If he took official action, that in effect killed the law, and made it impossible to carry out the law, he would have."

Gluck, in her piece, argued that Trump has taken steps to kill the law. When the president did things like end needed subsidies that help the poor pay for medical care, cost-sharing reduction payments, he undermined the efficacy of the law, Gluck argued. And he's taken other actions like shortening the enrollment period and canceling grants to health navigators that help sign people up.

She noted a tweet that he sent out: "ObamaCare is causing such grief and tragedy for so many. It is being dismantled ..." That's problematic legally, Gluck argued, because it shows that his reason was harming the law. He's regularly said that it has to go.

The tweets are where Segall believes her argument is strongest. "His tweets say, 'I’m going to kill this law,'" Segall says. "If Trump went to court and said, 'I’m trying to kill this law,' I think that’s probably unconstitutional. ... That would be very persuasive in court."

Kermit Roosevelt, a professor at the University of Pennsylvania Law School and a constitutional law expert, agrees that the tweets are key. "Trying to destroy the ACA is not faithful execution," Roosevelt tells Bustle in an email. "Motive is very hard to prove and presidents do get some discretion, but Trump has been so extreme and open about this that it's hard to argue he's doing anything but trying to kill Obamacare."

Those moves to kill the law extend beyond Trump himself to the Department of Health and Human Services because they have been denying waivers to states that want to stabilize their insurance markets (even if the waiver is a conservative plan). Trump reportedly told then-HHS Secretary Tom Price that he was to tell Iowa no on their request, even though the governor and both senators are Republicans and were pushing for it.

"The president has a right not to like the ACA. But so long as it is the law of the land, he does not have the right to undermine it through the use of executive power," Gluck argued. What's curious, though, is that this legal argument has never been made against a president.

So enforcing a ruling against him will be curious to see, too. In the past, presidents were given the benefit of the doubt when not enforcing laws to a T. That was when the ultimate benefit was to make the law function in the long term, Gluck writes. Obama did that with changing ACA deadlines, for example.

Now, in this instance, states may be the ones to keep him in check. More than a dozen states have sued the Trump administration for trying to "blow up the system," New York Attorney General Eric Schneiderman said when the lawsuit was announced. They want him to continue the cost-sharing reduction payments. But those specific grievances regarding the payments are not the same as the constitutional question that Gluck lays out, Segall tells Bustle.

"We’re in very new territory. There is no right or wrong. No court has ever ruled that a president hasn’t faithfully executed the law," Segall says. "The only thing we can do is guess and use intuition. ... My thing about constitutional law is that we really don’t know, and the experts don’t say that enough."