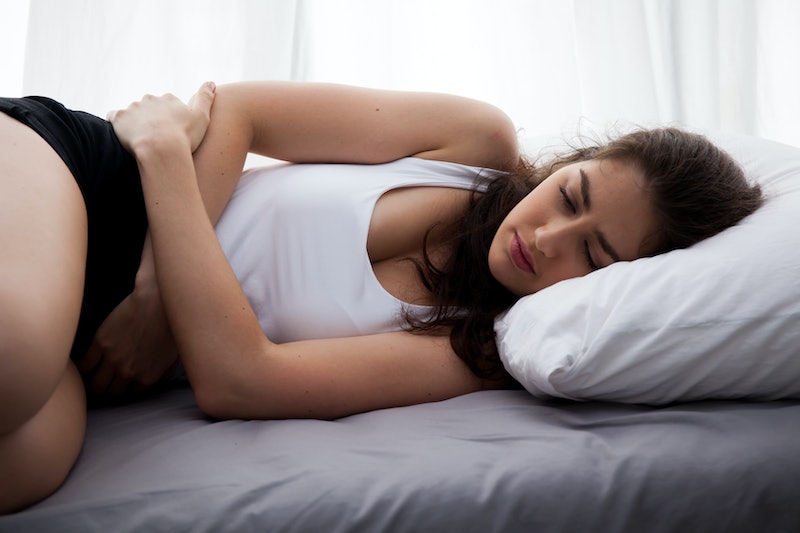 People who get periods are all too familiar with the symptoms — muscle aches, fatigue, dizziness. Alice Benjamin, a nationally board certified and award-winning Clinical Nurse Specialist and emergency room nurse, tells Bustle, "Often times during your menstruation, you may feel weak, tired, and bloated amongst other things." Some people complain of extreme symptoms that might feel similar to the flu during their period, leading to the moniker "period flu." But some people wonder if you're more likely to get the flu while you're on your period, and how to feel better faster.

If you’re usually not the type of person to worry about flu season, this year’s deadly flu season may have gotten your attention. The Centers for Disease Control and Prevention (CDC) estimates 9 million to 35 million flu-related illnesses, 140,000 to 710,000 hospitalizations, and 12,000 to 56,000 deaths in the United States in a typical year. Worldwide, flu statistics are worse. The World Health Organization estimates that the flu is responsible for 3 to 5 million cases of severe illness, and about 290,000 to 650,000 deaths.

This year, the CDC reports that 37 children have died from flu complications this season; additionally, there have been 11,965 laboratory-confirmed flu-related hospitalizations reported between Oct. 1 and Jan. 20, and there’s still a few more weeks left in this year’s flu season. But are people on their periods making up a disproportionate amount of flu cases? There’s some limited research that suggests that stress around your period could suppress your immune system, but there’s no proof that your period makes you more likely to get a viral infection like the flu. Benjamin tells Bustle, “No, being on your period does not make you more susceptible to getting the flu." While you're on your period, you can "rest assured your immune system is still doing its job,” according to Benjamin.

Dr. Steven R. Goldstein, professor of obstetrics and gynecology at New York University School of Medicine, told Cosmo that “The drop in hormone levels prior to our period, as well as the stress brought on by PMS, can make [cold and flu-like] symptoms feel more pronounced.” So the good news is your period isn’t sabotaging you, but there definitely are changes happening to your body during your period that can make you feel sick.

Dr. Molly O’Shea pointed to prostaglandins (hormones released before your period starts) when asked why some folks get flu-symptoms before their period in a blog post for U by Kotex. “If they only worked locally on the uterus, you would just have some cramps, but these actors find their way into the bloodstream and to nearby structures like the intestines — and can wreak havoc! Prostaglandins can cause intestinal cramps, diarrhea, nausea, vomiting, a feeling of being flushed, and general achiness,” she explained.

Although some period symptoms and and flu symptoms can be similar, it’s definitely possible to have the flu while on your period. If suspect you have the flu, Dr. Alan Taege, an infectious disease specialist at the Cleveland Clinic, tells Bustle you should “Contact your physician quickly.” He further explains, “If you catch influenza symptoms early enough, you can still use medication to markedly reduce the severity and duration of the infection.”

The flu season is worst than those in the past, according to the CDC. It’s important to stay vigilant and pay attention to your physical health. This flu season will last for a couple more weeks, but if you stay away from potential exposure and contact your doctor once you notice symptoms, you have a better chance of avoiding a painful flu — whether you’re on your period or not.