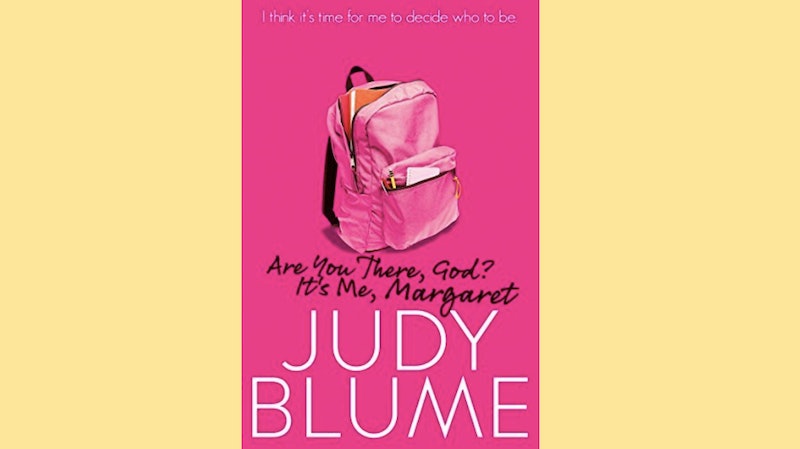 One of the first things I learned about Judy Blume was that she is Jewish. In Are You There God? It’s Me, Margaret., Margaret’s parents aren’t both Jewish. But Judy’s were. My parents told me.

When I was 12, I was supposed to be preparing for my bat mitzvah, but instead I was reading Are You There God? It’s Me, Margret. I was uninspired, turning back for what must have been the fifth or sixth time to the friend who just understood, who didn’t know what life was all about, I felt.

Margaret also didn’t understand why. When she came into my life, she was the only person who had the freedom to ask these questions.

“I never even thought about it,” Margaret remarks, the ‘it’ being religion. “Now, all of a sudden, it was the big thing in my life.”

Judaism was always the big thing in my life. I was fascinated by the choice Margaret got to make for herself. I thought, would I choose something else if I could? Or, would I choose nothing? I had not had the privilege of being a blank slate.

My doubts had been boiling for years. I felt my questions burrowing under my skin. In fifth grade, I raised my hand in Judaics class and asked, “What if God isn’t real?” Our teacher was a rabbi. He did not appreciate the question. He also didn’t answer it. My classmates chuckled at my question — we had not been taught to question such things, and although many of them undoubtedly shared my disbelief, the norm was to uphold the status quo of the institution.

From then on, my questions grew in size and scope. It seemed as though they wouldn’t be entertained by anyone, chalked up to ‘angst.’ Which perhaps it partly was, but that didn’t make it wrong.

I’m not sure my mother thought about this aspect of the book when she gifted me her old copy of Are You There God? It’s Me, Margaret. The paper was worn and it carried the satisfying smell of many previous reads. I believe its purpose was to ease me into puberty, but instead I focused on Margaret’s search for truth.

I started reading the book over and over again. Margaret conversed directly with God, something that I still had not been able to achieve despite being instructed each day to do so. Through her access to choice, I tried to find ways to make my own.

The week before my bat mitzvah, I fully melted down. I didn’t want to write my speech. I chose my portion because I had cared about it years earlier, because it contained the story of Noah’s ark and we had discussed the concept of relative righteousness in school. I was eager to explore the question: Do you only have an obligation to be good relative to those around you, or should we be held to the highest standard no matter our environment? Now all of that interest had melted away. Historically, apathy had filled in that empty space my enthusiasm left, but this time it was anger.

I didn’t have the words yet then. Blume helped me find some of those words.

“None of it matters,” I cried to my parents who stood watching me, brows scrunched, appalled by my childishness. I had many responsibilities in my house, and losing my temper in this way had been a thing of the past for many years.

“I never wanted to do this,” I told them. “I never had a choice.” That was not dignified with a response. I had wanted to tell them that they didn’t have an excuse not to give me a choice. That I learned I could make one for myself, and I wanted to exercise that right. That I was holding them to a higher standard, despite the environment we were living in. I didn’t have the words yet then. Blume helped me find some of those words.

“Sometimes I wish I’d been born one way or another,” Margaret grumbles, struggling to figure out where she belongs. This is what made me hate her. I thought she had no idea how lucky she was. I also understood that she appreciated the freedom she was given and was thoughtful about how to use that freedom.

I liked to think I would have been like her if given the opportunity. I’d hoped I’d be reflective and patient, exploring every avenue and centering humanity. But I couldn’t know for sure.

“If I should ever have children,” Margaret concludes, “I will tell them what religion they are so they can start learning about it at a young age.” The ending always stunned me; that Margaret would impose on her children what she has escaped. In my head I would say the same thing to her that adults said to me when I asked the questions about belief I found most pressing, driving me to madness:

Then I’d turn back to page one.

More like this
The Best Time To Date After A Breakup, According To Experts
By Bustle Editors
12 Ways You're Sabotaging Your Love Life
By Teresa Newsome and Lexi Inks
Your Daily Horoscope For August 19, 2022
By Alexandria Lettman
Here’s How Mercury Retrograde September 2022 Will Affect Your Zodiac Sign
By Nina Kahn
Get Even More From Bustle — Sign Up For The Newsletter