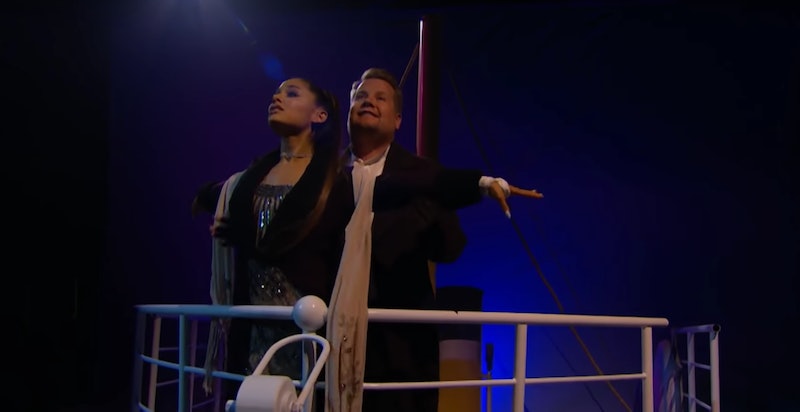 Near, far, or wherever you are, stop what you're doing and watch Ariana Grande and James Corden recreate Titanic with a brilliant musical in the span of just six minutes. That's correct: the host of the Late, Late Show With James Corden and Grande, one of the biggest pop stars with an even bigger voice, got together to perform 13 songs, with 9 sets, in one take, in a Soundtrack to Titanic.

Corden has done this type of sketch, called "Soundtrack to..." before, where he brings in a guest to perform a musical take on a popular film or genre (there are no spoken words, unless someone messes up). Anna Kendrick performed the Soundtrack to a Love Story once with Corden, then returned to perform the Soundtrack to Growing Up with Corden and Billy Eichner. Anne Hathaway also sang through the Soundtrack to a Rom-Com with the host. On his show, Corden has reenacted Rome and Juliet with his Into The Woods co-star, Emily Blunt, as well. Every time, the segment brings a new element and gets more and more creative. And this time, with Grande, things got very, very elaborate.

There has been talk, or tweets rather, that Ariana Grande was going to appear on James Corden's show. Back on Aug 7, Corden tweeted a cryptic message of how he was learning the lyrics to "No Tears Left To Cry." They were pretty coy, until later that day, Corden spilled the beans with: "This has made my day. The #CarpoolKaraoke we just shot might be one of my favorite ever! I can’t wait for you to see it. @ArianaGrande is the real deal." So this Soundtrack to Titanic came as a bit of a surprise for fans. Not that fans are complaining, though.

In the epic new musical take on Titanic, Grande was in the role of Rose, originally played by Kate Winslet, and Corden was in the role of Jack, originally portrayed by Leonardo DiCaprio. In the video, Grande starts off with the slow part of "Come Sail Away" by Styx, on a pretty impressive dock set. Perfectly mastering the wistful look, the next scene sees the two potential lovers meet while singing "Rich Girl" by Hall & Oates. And it doesn't stop there.

The two do a fabulous job of hitting all the main plot points and big tear-jerking moments of Titanic. From recreating one of the most iconic poses in all of cinematic history — the "I'm King of the world" pose on the front of the boat — to the basement-level dance party, to the steamy car-scene, Corden and Grande do it all. And let's not forget the drawing of Rose, which they interpreted paired with Ed Sheeran's "Shape Of You." Alas, all good things must end, as Jack dies to the sweet tunes of *NSYNC, and Grande brings the entire performance with an epic rendition of the '90s ballad, "My Heart Will Go On."

Corden made it a duet with perfect harmony, a moment fans particularly loved. Grande later tweeted her personal endorsement of the stirring duet, retweeting a fan and adding "come tf tru harmony @jkcorden."

Grande is coming back to The Late Late Show for the epic Carpool Karaoke on Aug 15, and she tweeted that she'd "never had more fun." It's possible Grande has more tricks up her sleeve to celebrate the week of her new album release, and if her Carpool Karaoke is anything like the Soundtrack to Titanic, fans will definitely be entertained.

More like this
An Ultimate Guide To The Music Of 'Rap Sh!t'
By Brad Witter
How Lady Gaga & Adele Are Closer To The EGOT All Of A Sudden
By Jake Viswanath
Bridgerton’s Simone Ashley Stars In ODESZA's "Love Letter” Music Video
By Radhika Menon
Twitter Is At Odds Over Taylor Swift’s Possible ‘All Too Well’ Oscar Run
By Brad Witter
Get Even More From Bustle — Sign Up For The Newsletter