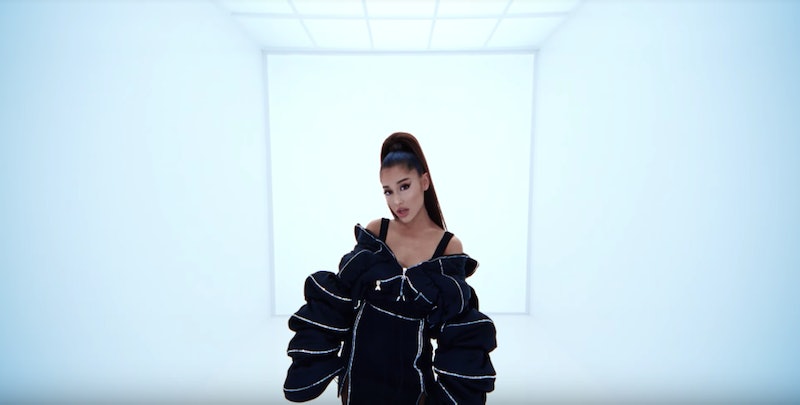 Over the past year or so, Ariana Grande has made two whole albums — Sweetener and Thank U, Next — in six months, and gone on tour after giving fans iconic videos like "Thank U, Next," and "7 Rings." Now, three months after her last video for "Monopoly" with friend and fellow songwriter Victoria Monét was released, Grande is at it again with "In My Head," this time releasing the video with no announcement. Ariana Grande's "In My Head" video was released in the middle of herVogue cover story, launching both on the magazine's website and their YouTube channel on Tuesday, July 9, and it's sure to make waves.

The song comes from her most recent album, Thank U, Next, and is about severely misjudging someone when you want to see an idealized version of them. It's honestly the go-to song for anyone getting over another person who just did not turn out to be who you thought they were. But the video isn't about an idealized potential love interest, it's about Grande herself. In fact, no one else appears in the video, which takes place in an illuminated white box. Very different than all of her more recent videos, there's no storyline and no co-stars, just Grande, her signature thigh-high boots and her high pony.

The pony has a bit of a wig-snatching moment as well, literally dancing on it's own, along with her sky-high heeled boots. It's a bit trippy to see pieces of Grande's image dancing alone without a body, but with such a simple set up, it's no surprise that Grande added something a little bit different — it's just her style.

In a tweet, and article, shared by the official Vogue account, the video concept was explained: "Without any backup dancers or elaborate scenery, director Bardia Zeinali captures the creative claustrophobia of being @ArianaGrande." Despite the simplicity of the setting, the video does give a sense of being corralled into her own little bubble, possible highlighting how Grande writes her music.

In the bigger feature story about Grande for Vogue, the singer talked about how difficult it's been for her to tour with these deeply personal songs "about wounds that are so fresh." She said, "It’s fun, it’s pop music, and I’m not trying to make it sound like anything that it’s not, but these songs to me really do represent some heavy sh*t." Not surprisingly, "In My Head" is one of these songs — a light, airy song that's about a deeply personal and heartbreaking realization regarding someone close to you.

Pharrell Williams, who produced a lot of Grande's recent music, including Sweetener, called Grande an "R-rated version of a Disney character, super-vivid," in the Vogue article, but said she's very "self-aware" of that super polished, caricature version of herself everyone's grown to know. Grande added that behind the high pony and style she's come to be known for, she's also not shy about letting the real her shine through, too. "I love disrupting it [her image] for the sake of my fans and making clear that I’m a person—because that’s something I enjoy fighting for," Grande said. "The music is very personal and very real, but yes, if you can be me for Halloween, if drag queens can dress up as me, then I’m a character.” And never has that "character" been more clear than in this video, with the ponytail and the dancing boots on full display.

In addition to the floating heads and stark white room, the "In My Head" video has fierce looks, camera tricks, purple overlay, and also a bit where Grande sings the song without a track. While different than her previous videos, it stands on its own and gives fans another way to enjoy one of the best songs from her album.

More like this
Jennifer Coolidge Slid Into Ariana Grande’s DMs In The Most Iconic Way
By El Hunt
Ariana Grande Just Wore The Chunkiest Knit Sweater I've Ever Seen
By Dominique Norman
Will Beyoncé Perform At Or Attend The 2023 Grammys?
By Jake Viswanath
Taylor Lautner Thought Taylor Swift's 2009 VMAs Interruption Was A "Skit"
By Alyssa Lapid
Get Even More From Bustle — Sign Up For The Newsletter
From hair trends to relationship advice, our daily newsletter has everything you need to sound like a person who’s on TikTok, even if you aren’t.