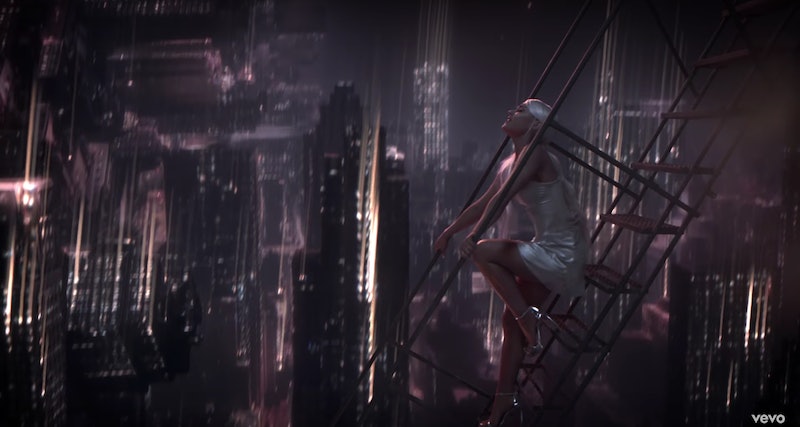 She's been laying low this year, but Ariana Grande's back with "No Tears Left To Cry." This is the singer's first single since her Dangerous Woman tour was interrupted by the Manchester terrorist attack. Grande was deeply shaken up after a bomb exploded at her concert on May 22, 2017, an event which killed 23 people and left more than 500 injured. It's possible that the pop star's new song "No Tears Left To Cry" alludes to the Manchester terrorist bombing.

Needless to say, the tragedy in Manchester was a heartbreaking event. But the upbeat tempo and positive vibes in Grande's comeback song deliver an uplifting message to all her fans.

Lyrics from her chorus go:

Right now I'm in a state of mind

Ain't got no tears left to cry

Oh I just want you to come with me

We're on another mentality

Ain't got no tears left to cry

To accompany the emotional song, Grande released the "No Tears Left To Cry" music video, where she defies gravity and reflects from above cityscapes.

The video glides through the glittering lights of an urban landscape, shifting through topsy-turvy angles. Grande dances and steps spritely from walls to ceilings to strings of lights. The video has a sleek, futuristic look as Grande sings about good vibes.

Comin' out, even when it's rainin' down

Shut your mouth, and if you don't know

Then now you know it, babe

The excitement for "No Tears Left To Cry" started this week when Grande broke her social media silence to tweet the song's title upside down. She followed it up with promotional images leading up to the song's release. Grande's colleagues and friends, including Kim Kardashian, also helped tease the single by sharing pictures of a sweatshirt Grande gifted them. The gray sweatshirts say "No Tears Left To Cry" upside down.

And Grande's fans are living for the new song and video. "This is already my new favorite song," wrote one YouTube commenter. The Pretty Little Liars YouTube account also chimed in, "Really wish there were No Tears Left Behind wigs for sale because after this bop, I think we're all in need of a new wig...﻿"

Grande's return to music comes after a nearly year-long hiatus from new music. Her manager, Scooter Braun, revealed on the “Big Questions with Cal Fussman” podcast that Grande suffered trauma following the terrorist attack at Manchester Arena. “When she found out that fans of hers had died, she was so sad. She cried for days, she felt everything — every face they announced, every name, she wore on her sleeve," he said on the podcast. "Every bit of emotion because that’s who she is.”

Grande canceled subsequent tour dates, but after she visited 19 of the injured victims in the hospital, she made the difficult decision to continue the Dangerous Woman tour. “Because if [the terrorists] thought we were going to roll over, they don’t know Ariana and they don’t know me," Braun said on the podcast.

"No Tears Left To Cry" could possibly be the first of more new music from Grande this year, but she hasn't hinted at it yet. One thing's for sure: Grande is definitely back.